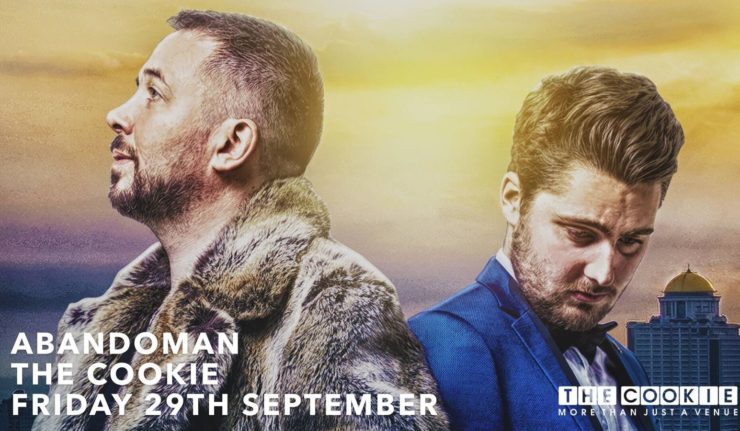 The perfect blend of music and comedy is hitting Leicester as Abandoman perform at The Cookie on Friday 29 September.

Yes, Ireland’s top comedy hip-hop improv team and Edinburgh Fringe sell-out favourites Abandoman are bringing their “raucous, expansive and relentlessly hilarious” show to The Cookie. Watch in awe as they create brand-new songs and narratives based entirely on the audience’s suggestions. Unparalleled in their field, Abandoman are fresh from appearing as the house band on Alan Carr’s Friday Night TV show Happy Hour, headlining comedy stages around the globe and a sell-out tour of Australia. This is their Life + Rhymes.

For this show, Abandoman bring you a fictional biopic – of epic proportions. This imaginary retrospective spans twenty years and sees the duo’s attempt to “make it” as a band in the early 90s. Not only will the audience witness the highs, lows and scandals… they will form the supporting cast every night.

Come see the show that entertained over 10,000 people at last year’s Edinburgh Fringe and has received rave reviews!

Tickets to see Abandoman at The Cookie on Friday 29 September are priced at £12 and are available from Gigantic.

**WIN**
We’ve got 2 pairs of tickets to see Abandoman on Friday 29 September to give away to Cool As Leicester readers. To enter all you need to do is fill in your details below before the closing date of 10pm on Wednesday 27 September. Winners will be contacted shortly after.