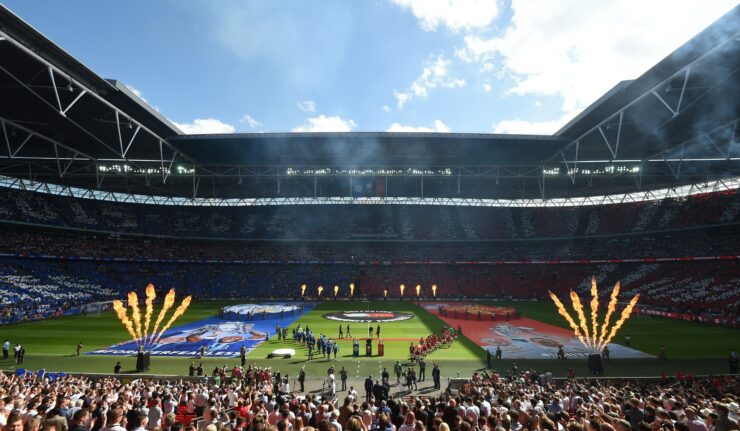 Following Leicester City’s historic FA Cup triumph earlier this year, the club will now face Premier League Champions, Manchester City, in the Community Shield on Saturday 7 August. If you fancy a day out at Wembley, you’re in luck, as we’ve partnered with McDonald’s to give away 5 pairs of tickets to Cool As Leicester readers.

The FA Community Shield is presented in partnership with the FA’s Community partner, McDonald’s, and is the annual curtain raiser for the football season. It has been played for over 100 years and sees the reigning League champions and the FA cup holders compete for the first silverware of the season.

This year’s match between Manchester City and Leicester City takes place on Saturday 7 August and thanks to our friends at McDonald’s you could win the chance to be there at Wembley Stadium.

We have 5 pairs of tickets to give away, situated in the Leicester City end of Wembley Stadium. To be in with a chance of winning, simply fill in the form below or enter via Facebook or Instagram. Winners will be chosen at random from all 3 methods of entry.

Entries close at 5pm on Tuesday 3 August and winners will be announced and contacted that evening.

Terms & Conditions:
This competition runs from Saturday 31 July to Tuesday 3 August 2021 at 5pm.
Winners will be selected at random after the closing date and contacted within 24 hours.
Winners will be announced via social media and contacted directly.
If winners do not confirm that they’re able to attend within 24 hours of being contacted then the prize will be reallocated.
Tickets will be situated within the Leicester City supporters area and are for Leicester City supporters only.
Winners will be supplied with a ticket code and instructions of how to register and claim their tickets.
Entrants must be 18+.
Data submitted via the above form will not be shared with any third parties unless opt in selected.
Competitions are ran in accordance with our Cool As Leicester privacy policy.
Open to UK residents only.
There are 5 pairs of tickets available to winners.
Travel and accommodation is not included.
All tickets are subject to The FA’s Terms and Conditions of Entry which include:
– Wembley Stadium Ground Regulations
– Wembley Stadium COVID-19 Spectator Code of Conduct