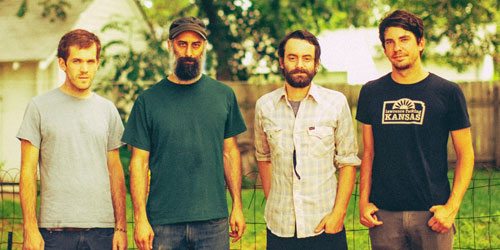 The conflicting emotions I’m experiencing about this gig are taking me back to the extreme drama that was my life when I last saw them in (I think) 1999. Things are much more sedate now, and it’s quite a heady experience to feel joy, excitement, despair, bitter regret and nostalgia all at the same time – I’m not entirely sure how I functioned as a teenager with all of this going on in my head all the time.

The Appleseed Cast are the first band outside of the shoegazing indie scene of the mid-late 90s who I really fell in love with (and fell in love to the sounds of, which makes it all very poignant). They were my introduction to emo, always the first band I cited when ranting about Panic At The Disco not being fucking emo, thank you very much, and one of the few who have really stayed with me as I’ve got older and stopped being a part of the scene.

The first album I heard was The End Of The Ring Wars, which I would urge anyone and everyone to listen to – and really listen to it, don’t just put it on in the background. I don’t play an instrument, and generally find that I’m drawn to the overall feel of a song or an album rather than the individual aspects; but the drumming on The End Of The Ring Wars and in particular on track 10, Portrait, layered with the occasional sax, the sweeping, crashing guitar throughout, and the fragility of Chris Crisci’s voice … I genuinely don’t think words can do this album justice. All the feelings.

The band have been prolific since 1998, with eight more albums to their name. They’ve diversified – they ditched the sax player sadly (along with a number of other lineup changes), and their sound has varied wildly, but they have continued producing beautiful, melodic post-rock. Low Level Owl VI/VII (2001) was the most critically acclaimed of their later releases, and brought a number of (not especially well founded) Radiohead comparisons as well as more attention; but as the whole back catalogue is available on Spotify you’d be missing a trick not to listen to it all.

They’ll be accompanied by Listener and Kurt Travis for the set, about whom I’m also excited but much more calmly so – which is probably for the best as I’m sure the cleaners at Firebug could do without scraping me off the floor at the end of the evening.

If you’re going and you see a small heap in the corner by the stage, grinning wildly with tears streaming down her face, don’t mind me. If you weren’t planning on going, I would suggest pointing and laughing at the aforementioned quivering heap is reason enough – and whatever it reduces me to, it promises to be a great night for everyone else.

Tickets are priced at £15 and are available now from SeeTickets.