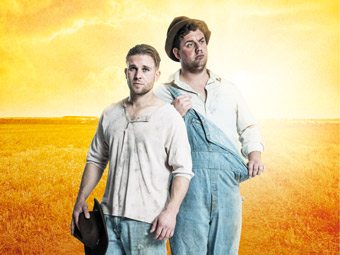 My first encounter of John Steinbeck’s Of Mice and Men was, like so many of us, as a set text at school. Having loved the story and interesting characters ever since, I was looking forward to watching this beloved story performed.

The setting is in 1930s America during the great depression. The stage set reflected the poverty and desolate lives of many American’s during the 30s and pre performance, there wasn’t a curtain so the audience could see the stage and the props to the side bringing out the setting of the story early on.

The openness of the scenery portrayed how little people had and how basic their lives were, throughout the performance the cast moved props and waited quietly but were always visible. Adding to this the use of music and sound, when the cast moved scenery it was well timed and rhythmic movement giving a dramatic feel of woe. All this would not have worked if it wasn’t tied together so well by the fantastic actors who really understood the character’s motivations, allowing the audience to see and understand their various struggles.

If Of Mice and Men is a story that you’re familiar with then you certainly won’t be disappointed by this fantastic adaptation. The whole performance was highly enjoyable and a must see.