There’s not long to go now until the UK’s premier rock festival lands on our doorstep as Download Festival takes places in June. Now they’ve added even more acts as well a comedy stage!

Download is set to welcome approximately 100,000 music fans to the hallowed grounds of Donington for a jam-packed weekend of legendary bands, entertainment, comedy, WWE wrestling and mindfulness at the UK’s largest single site festival. This year it’s headlined by Def Leppard, Slipknot and Tool and takes place from  14-16 June 2019.

The festival will play host to over 100+ acts, including stadium-smashing rock acts Smashing Pumpkins, Slash ft. Miles Kennedy, Trivium, Slayer, Enter Shikari and Halestorm. New acts have also been added to the bill including symphonic metal titans Epica, the world’s only ‘Elvis fronted Nirvana’ act Elvana as well as The Beaches, The Inspector Cluzo, Palisades and Blurred Vision.

Always moving forwards, this year Download all introduces the ‘Mind the Dog’ mindfulness initiative, where rockers can share a fully immersive live music and mindfulness experience, as well as the return of the wildly popular Do.om Yoga. Download is widely regarded as the UK’s friendliest festival and has a commitment to providing the best experience for fans, with accessibility and sustainability advances across the board. Download has already been awarded Gold Level status by Attitude is Everything and continues to improve! 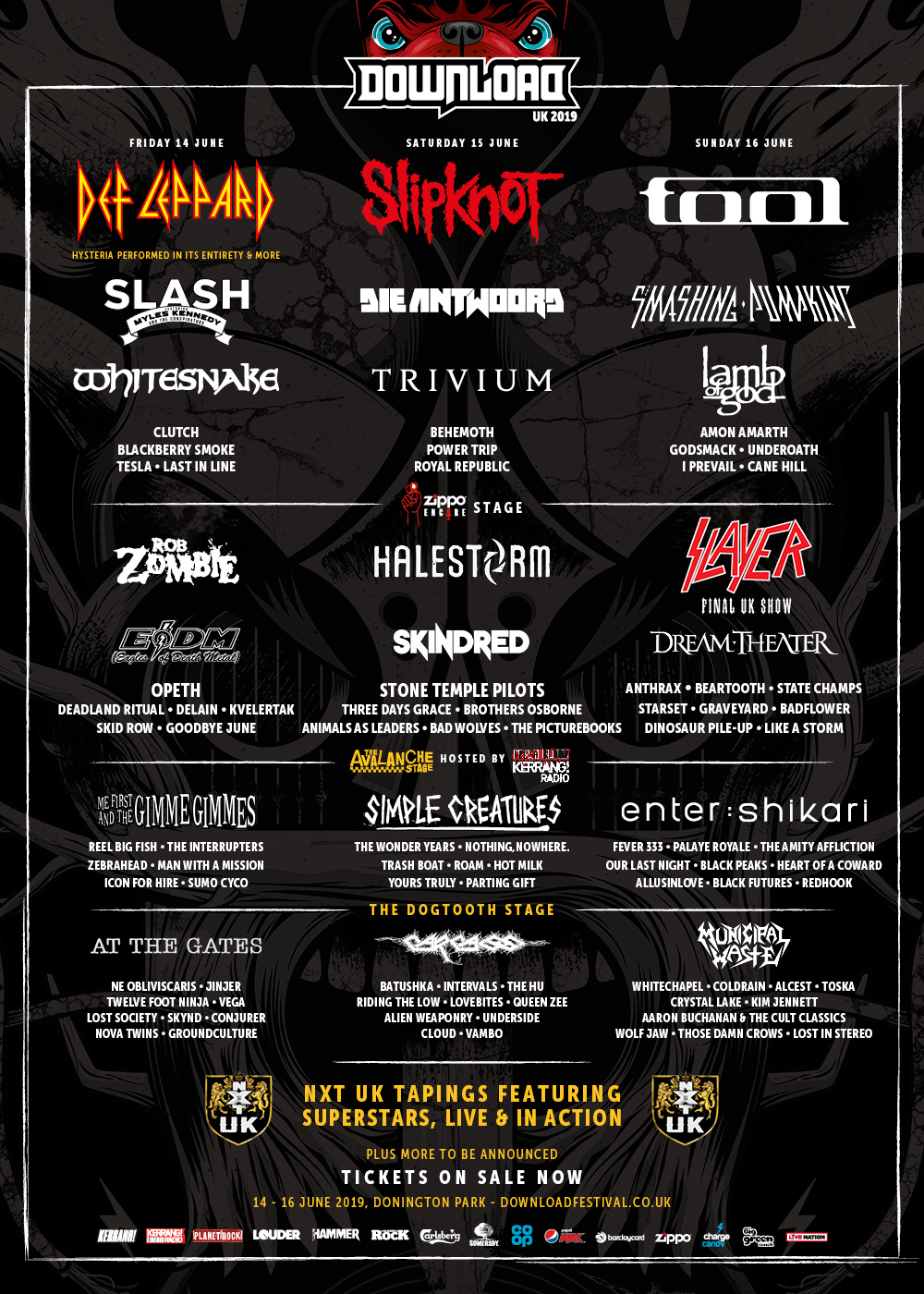 Download is also the only place in the world where fans can experience the exhilarating world of WWE NXT UK alongside the world’s biggest rock stars, as the biggest names in sports entertainment deliver fully-fledged, full-scale NXT shows in the festival arena. In addition to the NXT UK tapings, Download is pleased to welcome NXT superstars Adam Cole and Kyle O’Reilly of Undisputed ERA, Shayna Baszler, Matt Riddle,and more to come, to the already electric line-up.

There will also be a plethora of extracurricular entertainment in The Download Village with stalls, food, drink and lots of surprises, plus the return of the SINDROME in the arena – a place of death-defying record-breaking stunts and spectacular shows injected with a heavy dose of love, peace and rock ‘n’ roll. With new performers for 2019 including aerial contortionists El Duomi, Chilean death metal Bullicio Puppets, Aima Indigo’s ‘Nympho Nun’ show and the return of the UK Air Guitar Championships, where fans are invited exclusively to enter into this internationally recognised competition and to gain the chance of becoming the UK’s ultimate 2019 Air Guitar Hero and a shot at the world title in Finland.