After one year, 41 episodes and over five million listens, Bob Mortimer and Andy Dawson are taking their hit comedy podcast, Athletico Mince, on the road, with a host of all-new songs, stories, smart clothes, clear speaking and more. Following sold-out shows in Newcastle, Manchester, Leeds, Liverpool and London, Bob and Andy are bringing their hit comedy podcast to Leicester at The Y Theatre on Friday 21 July, with songs, stories, laughter, name-calling and chicken dippers.

What started out in March 2016 as an attempt to record a football podcast soon turned into something far stranger and more random after Bob and Andy realised that their footballing opinions actually had zero credibility.

Subjects covered each week include the lifestyle of former England manager Steve McClaren (including his love of beans on toast and the gastric struggles of his yellow snake Casper), Robson Green’s doomed attempts to meet Newcastle United manager Rafa Benitez and Andy’s run-ins with a short-tempered Jeremy Corbyn.

In keeping with the overwhelmingly non-football vibe, the podcast has also included lifestyle hacks, domestic appliance tips and meat advice, as well as a campaign to build the world’s largest saxophone just off the A1, and a definitive guide to lifting up celebrities.

More recently, Bob and Andy have lifted the lid on the Gangs Of The EPL – the secretive bullying activities between various groups of Premier League stars.

The live shows will feature lots of new material from the various hit features of the podcast, along with one or two surprises.

Sure to be hugely popular, don’t miss out on tickets for the shows at 7pm and 9pm on Friday 21 July. Grab your tickets from The Y Theatre’s website. 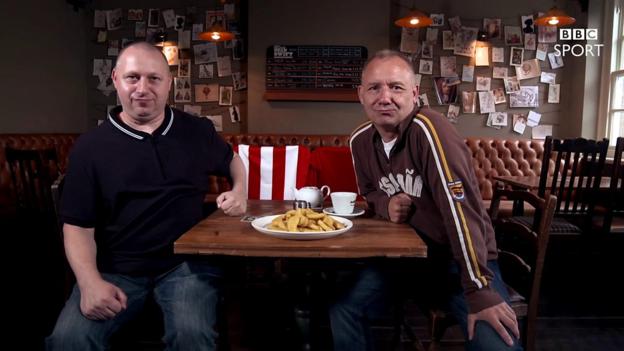