Head down to LCB Depot during November to see works from 5 StudionAme artists who have been invited to create innovative exhibitions for their 3rd annual take over of the LCB Depot gallery, Lightbox.

For the third consecutive year, 5 StudionAme artists have been invited to take over the LCB Depot Lightbox Gallery, with each artist given a week to display their current work. The works will create an eclectic and exciting exhibition program showing throughout the entirety of November.

Here is what to expect:

‘Veneration In Light Of Our Forebears’
Loz Atkinson
1 – 29 November 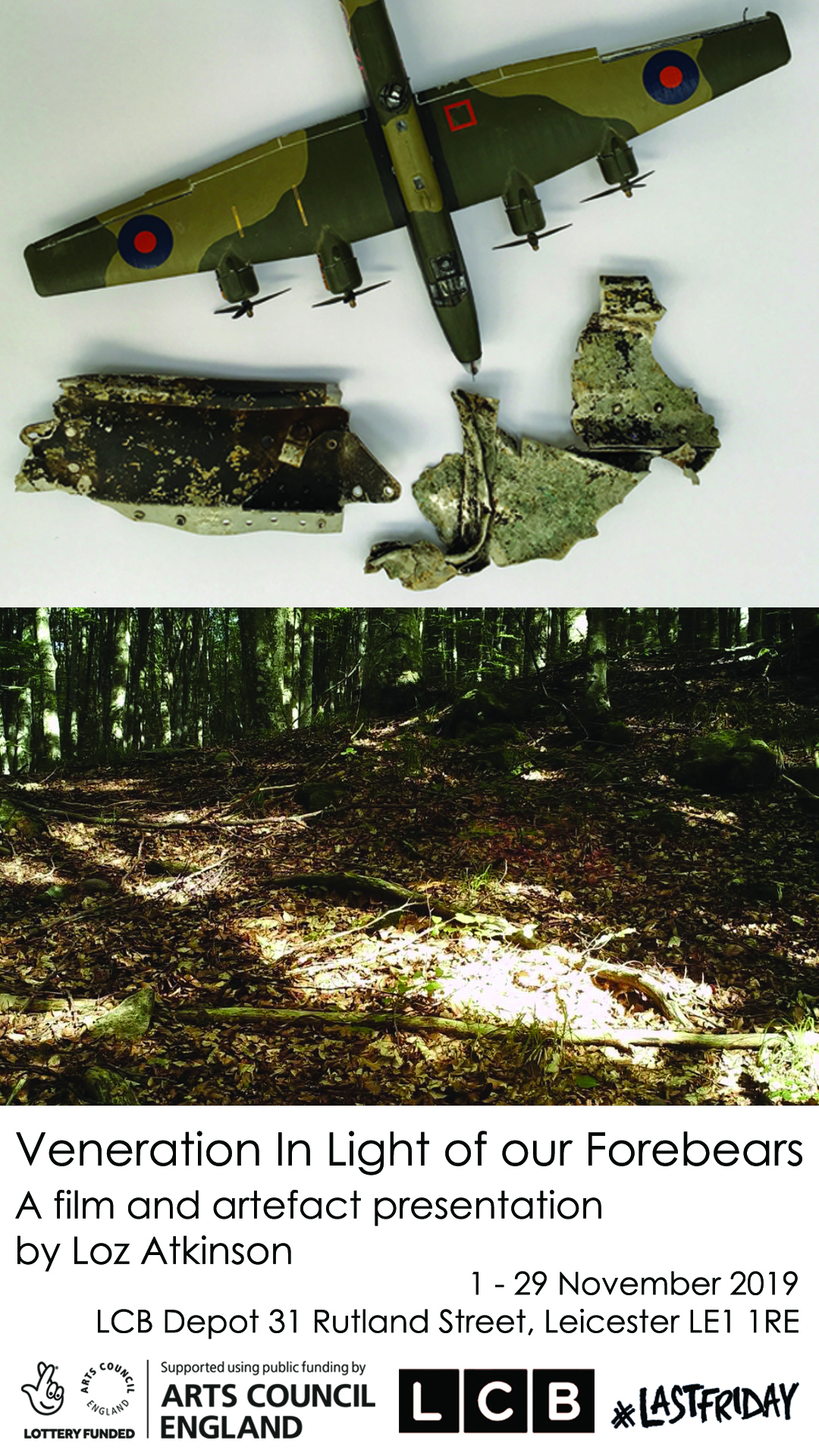 On display will be found artefacts from the 1944 crash and a looped stop motion film of over 3000+ images captured on the mountain. The radiant choreography captured within these images hold thoughts of apparitions of the past and how fleeting memories are and how they affect us. This display precedes a major exhibition on the entire project happening in May 2020. 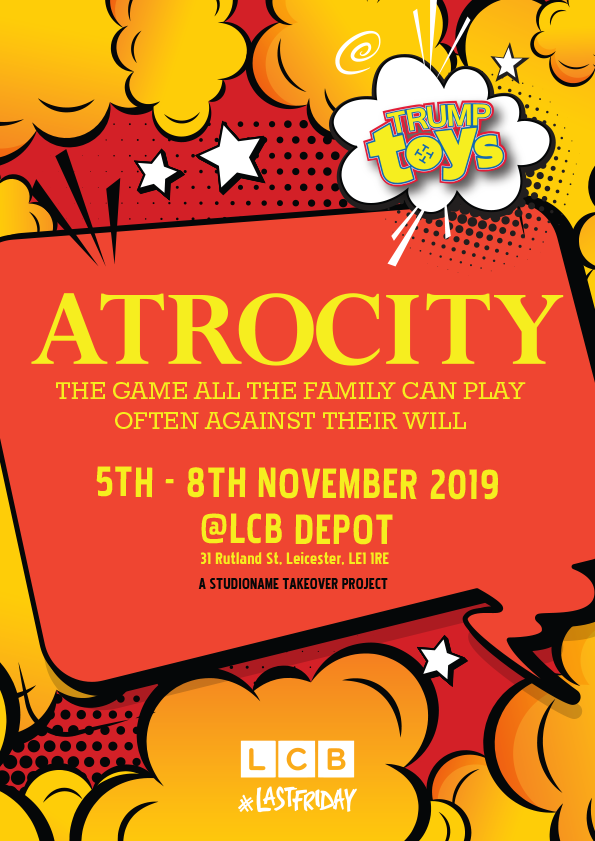 Posing as the marketeers for “Trumptoys.uk” they will be embedded at LCBs Lightbox and then LCB itself, throughout November. Persuading random strangers, to get involved in “Atrocity” – the new card game that’s about an old problem.

Statistics inform this new work and the makers are asking participants to ask themselves at what point does some one become the bad guy, who decides which numbers matter and as Stalin may or may not have once said, why is “one death a tradgedy but a million, just a statistic.”

Come and question your reality by playing “Atrocity” with Adam & Steve 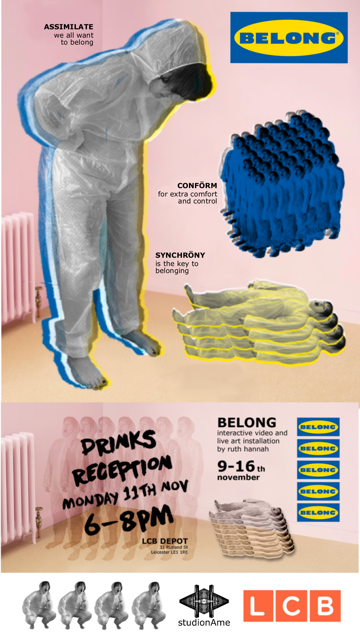 We all want to BELONG!

Are you tired of feeling alone?

Get stuck in the right echo chamber with BELONG!

We will help you to assimilate the right way.

Artist Ruth Hannah invites you to take part in an exclusive Yawnitiation ceremony to determine wether or not you BELONG.

Ruth’s debut show explores themes of identity, collective consciousness, cult brands, mob mentality and echo chambers; using video, sound and interactive live art to immerse you in a world that will make you question your own autonomy. Become one of us from 9th-16th November at the Lightbox gallery, LCB Depot in Leicester.

Be there to BELONG. 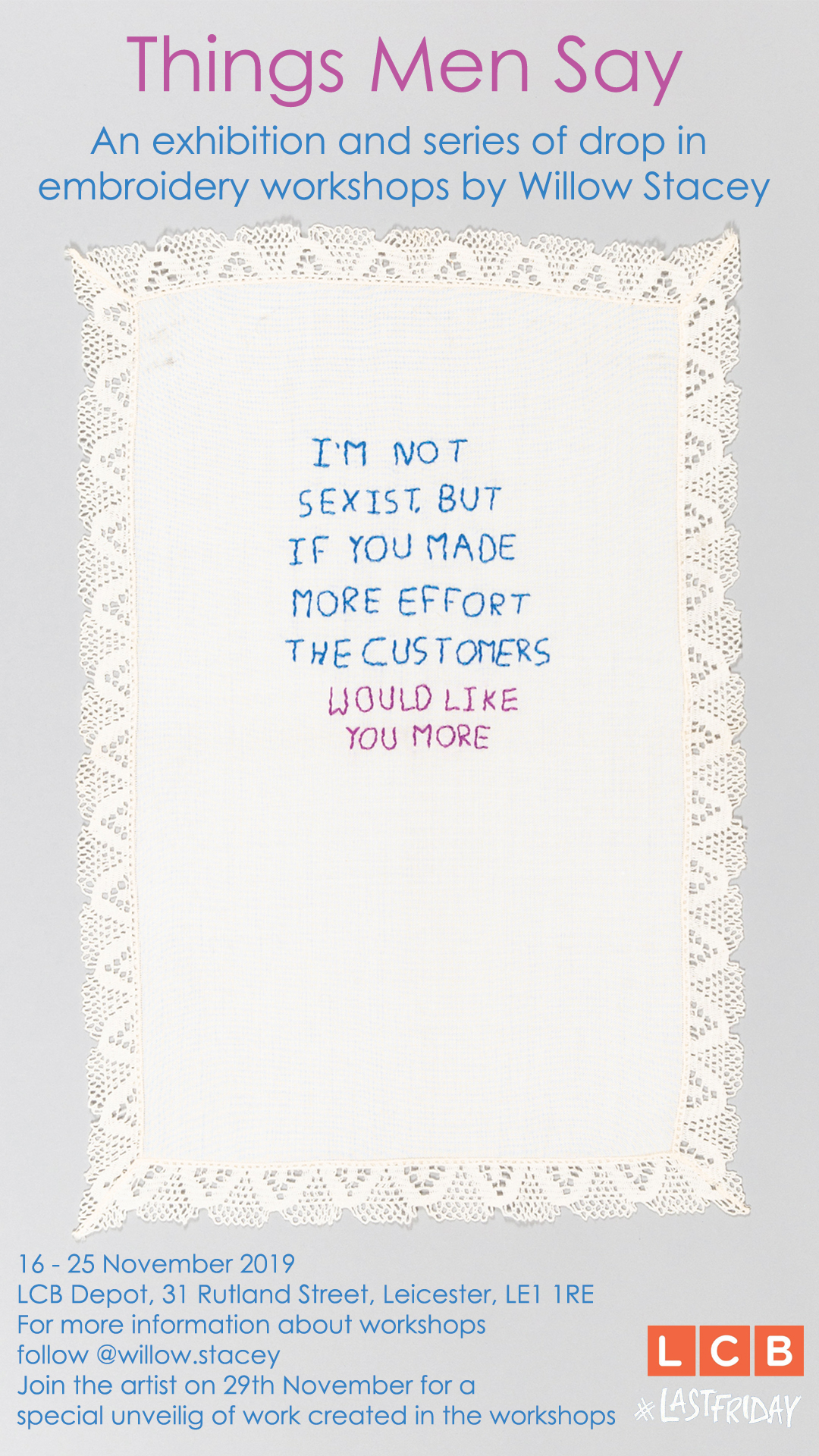 An exhibition and series of drop in embroidery workshops with the artist for more information on workshops follow willow on instagram @willow.stacey.

Willow explains what the work is about “When someone says something to you that sets you off on a whole new journey. For me it was when I was doing a shift as a waitress in the pub I have worked at on and off since I was 14. A customer said “if a woman is earning a lot of money she is doing a man’s job.” and I was left with that conflict of being at work and trying to stay professional and seething inside.

The family all know that I talk through my art, this work started as a way for me to portray what has been said to me, sometimes really pissing me off. I then became inspired to give other women a voice. I have been overwhelmed by the words sent to me and I see this exhibition as a work in progress as there is still so much to portray. The feedback already from some of those women has been the most important thing; one said it was cathartic and another said they had been carrying around the words for years without ever sharing them.

When I was deciding how to make this work I instantly knew I wanted to put the words on something inherently feminine and the act of embroidery creates a conversation between the brash sayings and the delicate, domestic textiles.

So that was what it took to start me off thinking about the things men say.” 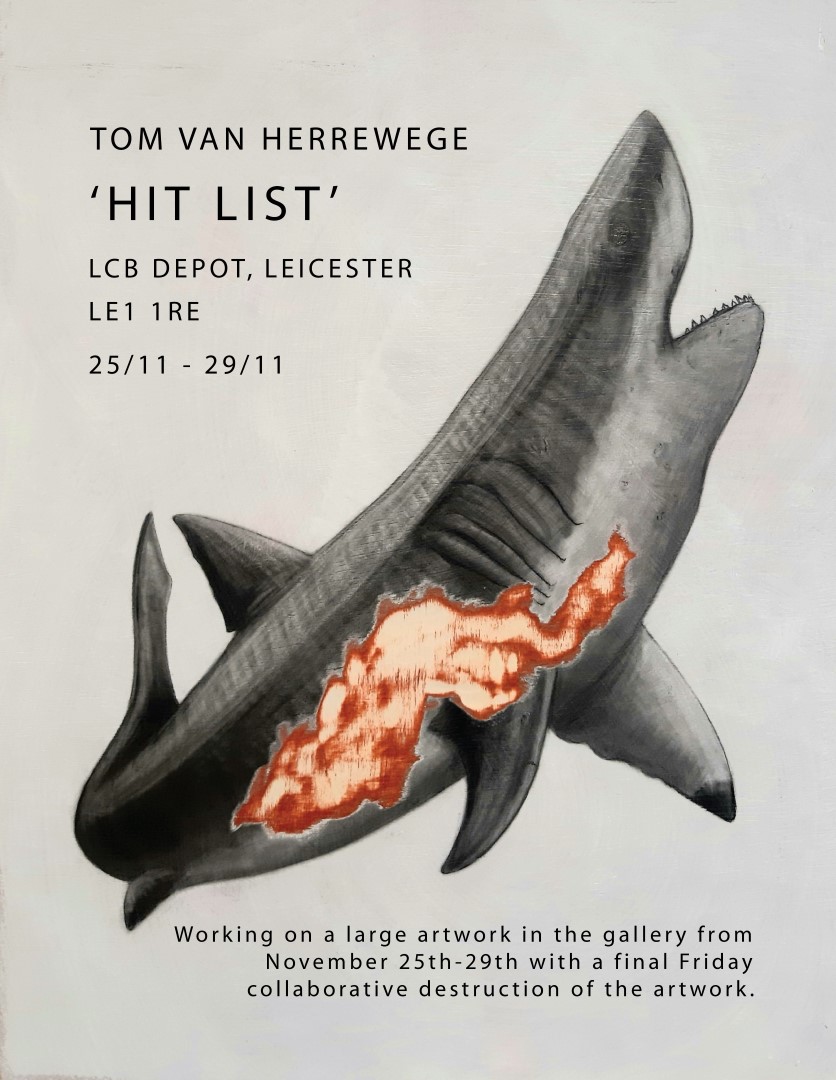 Hit List is an ongoing series of art works that highlight the extinction crisis within the animal kingdom. Tom sources antique materials such as bank notes, cigarette cards, prints and anything that has a sense of value and beauty that depicts an animal. He then researches the individual species and then he burns away some or even all of the image away to show how close that species is to extinction. So the more of the image that is erased- the closer the animal is to extinction in reality.

This visual survey of the state of the natural world is both impacting and very alarming when seen in a volume of erased images across the gallery walls!

Tom will be exhibiting these artworks in the Lightbox gallery space at LCB depot and also his recent, larger scale drawings. He will also be working all week in the Lightbox gallery on a huge drawing that will be completed by the closing event (Friday the 29th), where the visitors will be invited to erase the image away collaboratively with the artist.

The take over event will culminate on the 29th November to coincide with Last Friday, LCB Depot’s street food monthly event with many of the artists onsite holding special events.