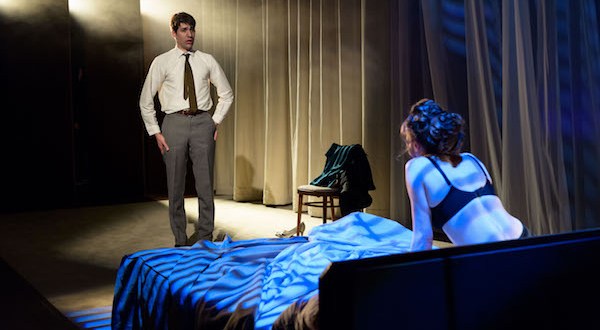 Terry Johnson’s stage adaptation of the ground-breaking film from the late 1960s, directed by Lucy Bailey combines Charles Webb’s original novel and the 1967 screenplay with its own free spirited scenes.

The audience is introduced to a young college graduate, Benjamin (Jack Monaghan), who returns to high expectations of a bright future from his upper-middle-class American family. The only trouble is, the thought of that future makes him sick to his stomach. He would like the chance to sit around and think about his future for several months but his family and their social circle demand that he perform in the role of Successful Young Upward-Venturing Clean-Cut All-American College Grad. At the end of two weeks Benjamin is driven to such a state of desperation that he succumbs to the seductions of a family friend’s wife, Mrs Robinson (Catherine McCormack). Their illicit relationship takes them on a thrillingly destructive course and leads Ben to find himself torn between his older lover and her daughter.

The clever use of minimal scenery and stage settings by Mike Britten, the lighting design by Chris Davey and visuals of palm trees and swimming pools by Ian Galloway,transform the audience back to the seductive mid 60s American home and hotel establishments. This is done particularly well during a time lapse sequence. The sexual nature of the performance is dealt with delicately and in a straight forward manner, leaving lots to the imagination. Catherine McCormack is magnificently sexy, shrewdish and self possessed as alcoholic Mrs Robinson, whilst Jack Monaghan plays his role as Ben with depth and honesty. Other roles worth mentioning are the interesting and innocent Elaine, the Robinson’s daughter, played by Emma Curtis, who conveys with ease the character’s contradictions. Her energy and passion for life offers a counter balance to Benjamin’s melancholy outlook. The supporting cast give noteable performances as the Braddocks, played by Tom Hodgkins and Rebecca Charles, showing the perfect example of well meaning parental concern. Richard Clothier’s portrayal of a moving Mr Robinson is best shown in an extremely well choreographed and directed fight scene. Elsewhere, Elsie Diamond and Daniel Crowder play a series of smaller characters each adding to the comedy of the play.

Terry Johnson’s adaptation of The Graduate captures some of the dreamy soul searching and black comedy of the original works whilst becoming its own entertaining and pacey piece. Well done to all involved! I left feeling the need to revisit both the film and read the book.

The Graduate is being performed at Curve until the 10th June 2017 and tickets are available from Curve’s website.