Review: Page One: Inside the New York Times 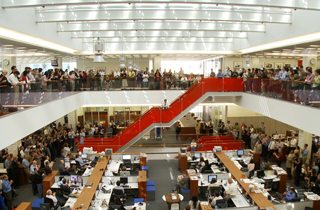 Page One: Inside the New York Times

By focusing on a year in the life of the New York Times, this documentary feature provides an illuminating insight into the current problems besetting American print journalism and by extension those affecting the newspaper industry in general.

As a documentary, Page One doesn’t have as cinematic a feel as a film like, for example, Julian Temple’s excellent Oil City Confidential of last year, but then it doesn’t have as hip or glamorous a subject, but it nevertheless should be a point of reference to anyone with an interest in the ways in which the media world is evolving.

The film tracks the newspaper through the events of 2010 by following several of its staff, especially media and culture columnist David Carr, one of life’s survivors, who despite his slightly android-like voice and initially stupendously abrasive manner, proves to be an entertaining guide. If one were to cast someone as a tough corporate boss in a Hollywood film on appearance alone, one would need to look no further than the editor of the time, Bill Keller.

The film describes that the pressures facing the New York Times and newspapers in general are primarily as a result of the ever expanding number of sources for news such as websites and blogs, which have drastically reduced readerships and the advertising revenues upon which the traditional newsprint market relies. This in turn has led to cuts to budgets and staffing which has in turn put in jeopardy the ability of newspapers to maintain high standards of rigorous journalism. Through the example of the New York Times the film makes the point that it is unclear whether newspapers that currently give away content for ‘free’ through their websites are going to be able to sustain this in future.

Interestingly, several years before the antics of the Independent’s Johann Hari became known to the wider public in the UK, the New York Times had its own reporter, a Jayson Blair, who went similarly ‘hog wild’ in inventing news stories, thus heaping much embarrassment on the paper.

In a debate featured in the film at which David Carr features as a panellist, the question is posed ‘would anyone care if the New York Times went out of business?’ and, in its way the film goes on to put forward a case as to why indeed it would be a tragic loss. The historical high standard of journalism upheld by the newspaper, backed up by the numbers of staff, for example foreign correspondents, simply can’t be rivalled by smaller news sources. Similarly the virtues of the strength of traditional newspapers are highlighted with reference to the case of the publication of classified U.S. State department diplomatic cables obtained by WikiLeaks by the New York Times in the US and the Guardian in the UK. Only the largest news organisations have the power not be cowed by threats of legal action and go ahead and print information in a way that would not be possible for smaller organisations.

As the film unfolds, the human drama of what it feels like for the staff facing up to the cuts being made to the paper’s staff comes to the fore. David Carr describes his history as a former crack addict and, on a return visit to his hometown to attend a conference, revisits the scene of his arrest years previously, in connection with drugs. On leaving the New York office of the paper to report from Bagdad, a young journalist is told “Don’t be too good. We want you back” and a touching moment comes when it is revealed later in the film that this person has in fact now been promoted in the Bagdad office. These more individual elements add to the appeal of the film.

All in all, it proves to be an enlightening and entertaining film and while it should come as no surprise that it comes down on the side of the journalism of the featured newspaper, it is not without its critique of it and its role.