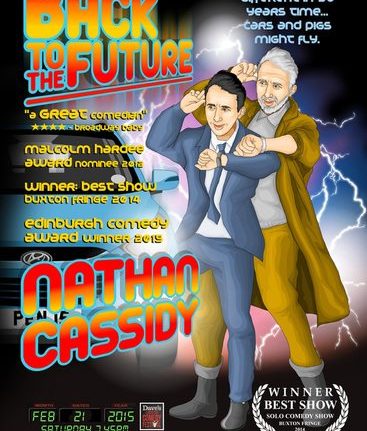 Cassidy creates great energy on the stage, using karaoke style public participation as a way of building an immediate rapport with the audience, which continues throughout his show.

If you’re a fan of Back to the Future, as I am, you will appreciate the fact that the future hasn’t quite panned out in the same way as originally envisioned in the movies! As further explained by Cassidy, flying cars were never on the cards due to a 1984 Road Traffic Act.

Cassidy goes on to explain the biggest changes in the last 30 years; with Ant and Dec taking over the world of TV; and mobile phones taking over our lives, how many of your Facebook friends do you actually converse with in person?

Cassidy hits it on the nose with his take on musical comedy, audience participation and his literal use of toilet humour. Overall a must see show