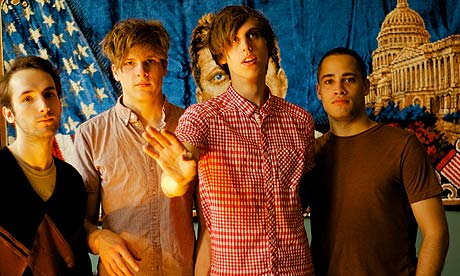 When NME declare you “Without question, one of the best new guitar bands on the planet“, you know you’re onto something special. This accolade was recently bestowed on Minnesota band Howler and next week they’re going to be tearing up The Soundhouse on Southampton Street.

The band’s debut album America Give Up was released at the start of the year to rave reviews from the likes of NME, Q and The Fly and their reputation has been growing since. With a likeness to The Strokes and hints of Jesus and the Mary Chain, Howler have been picking up new fans left, right and centre. Signed to Rough Trade, the band scored a legion of new fans after supporting indie starlets The Vaccines on tour last year and the effortlessly cool quintet continue to go from strength to strength.

The band play The Soundhouse on Thursday 10th May and advance tickets are just £8. Their January tour was a sell-out all over the country, so make sure you snap up your tickets whilst they’re still available and see this band playing intimate venues whilst you still can!

Tickets are available from HERE.

Check out the band’s debut single Back of Your Neck…