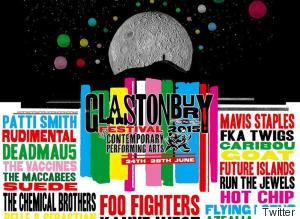 Glastonbury, the big one, the one that kicks off the summer, the only festival I firmly believe everyone has to go to at least once in their life, is back and coming up very soon indeed!

Don’t have a ticket? Fear not little ones as the resale is taking place on Sunday 19 April at 9am. Set your alarms early and get ready to scream at the internet… again!

As always the lineup has caused some debate. Kanye? Really? And are the Foo Fighters “Glasto” enough? (of course they are). But the thing is where Glastonbury differs to all other festivals is that once you’re there you won’t give a f*** who’s playing when and where because you’ll be too soaked up in the Glastonbury of it all. Ok we all love a good headliner, but there’s something unique about the festival that the best way to approach it is to just see where you end up.

There’s so much happening around the sprawling festival site that you won’t know where to start. So don’t even try to plan an itinerary, it won’t work. Or if it does you’ll be missing out on all of the extra brilliant things that this festival offers.

Take the Shangri La area, for example. An all night party with a full on American Diner open 24 hours/day serving food and drinks whilst the live acts carry on the performances. Or the infamous Rabbit Hole? Yes, look out for the Rabbit Hole and make sure you enter to uncover a world of mysteries. It’s a bit hidden and it’s not on the maps, so keep your eyes peeled. Just one of a number of “hidden” Glastonbury locations that you might stumble accross.

We could go on about it all day and not mention who’s playing on the lineup, bcause we don’t need to. That’s why it’s the one festival to sell out every year without any acts being announced.

It’s a special place which everyone should experience.

So set that alarm for Sunday!

All details about Glastonbury, tickets and performers can be found on the Glastonbury website.