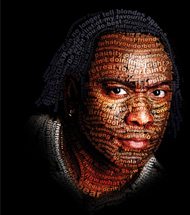 In just over a decade since he began performing, Reginald D Hunter has become one of the UK Comedy industry’s best-known and most distinctive performers.  His work is often brutally honest, frequently controversial but always meticulously measured and thought out. Now he’s bringing his Sometimes Even The Devil Tells The Truth tour to Leicester and will be at De Montfort Hall on Wednesday 16th November.

He is one of the few performers to have been nominated for the highly coveted main Perrier Award in three consecutive years and has become a well-known face on primetime television shows such as Live At The Apollo and QI and is a frequent guest on Have I Got News For You.

“His presence and intelligence make him one of the most brilliantly unpredictable comics in the country.” The Sunday Times

There are a few tickets left to see the tour when it hits Leicester next week, so make sure you don’t miss out! Tickets cost £20 and can be booked HERE.