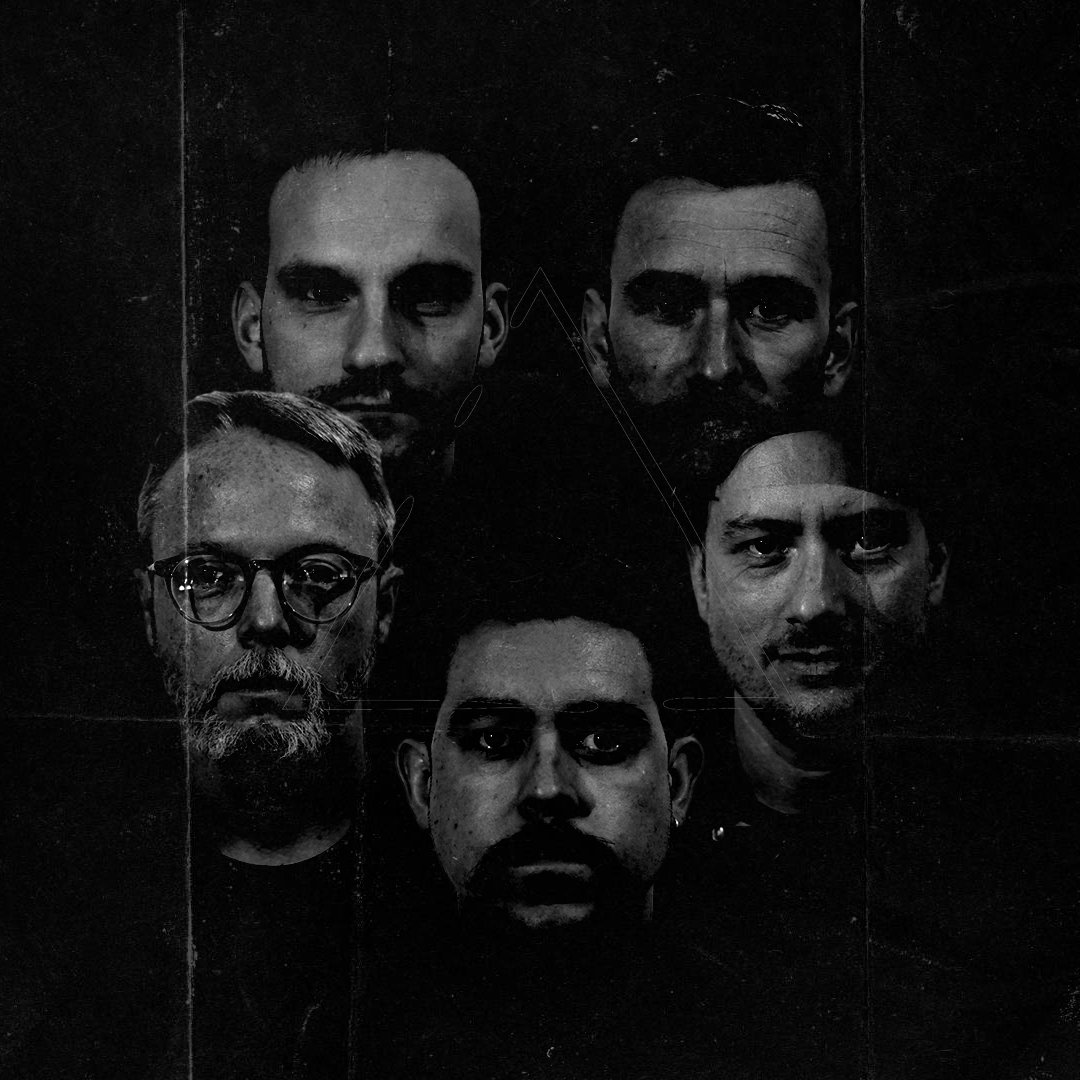 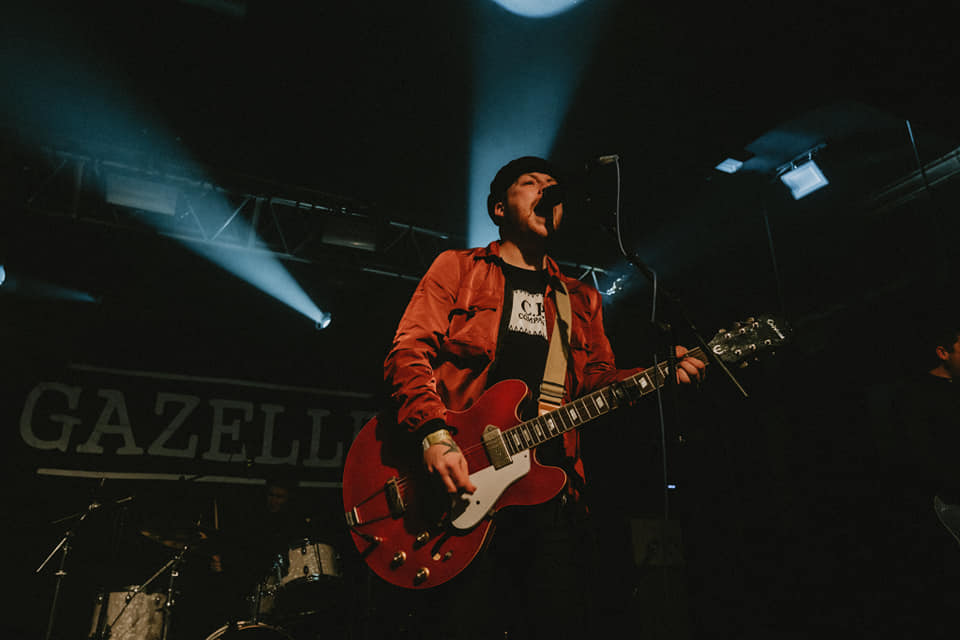 Leicester’s rock ‘n’ roll four-piece, Gazelle, are back with a headline gig at 2Funky Music Cafe. 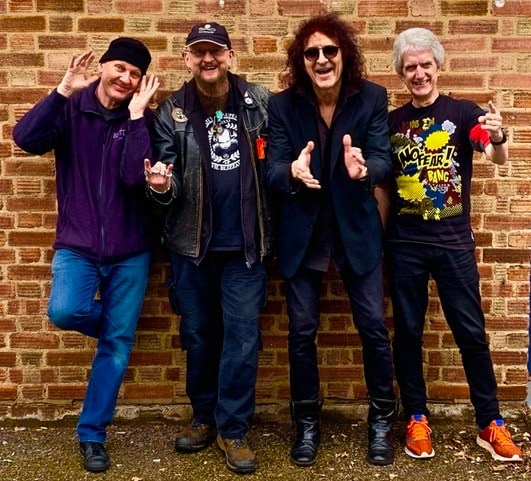 Born in 1978, out of the ashes of the Sonic Assassins, Hawklords was the brainchild of the late, great Robert Calvert, The Hawklords re-emerged in 2009 with a memorial concert in London for legendary British artist, the late Barney Bubbles, graphic designer for many of Hawkwind’s early 1970s albums. Since 2009 Hawklords have consistently toured Europe and the UK, released two official live concert performances on DVD and have produced seven albums of original music, the most recent being 2018’s ‘Brave New World’, which entered the UK Official Top 40 Rock and Metal Chart at number 12. 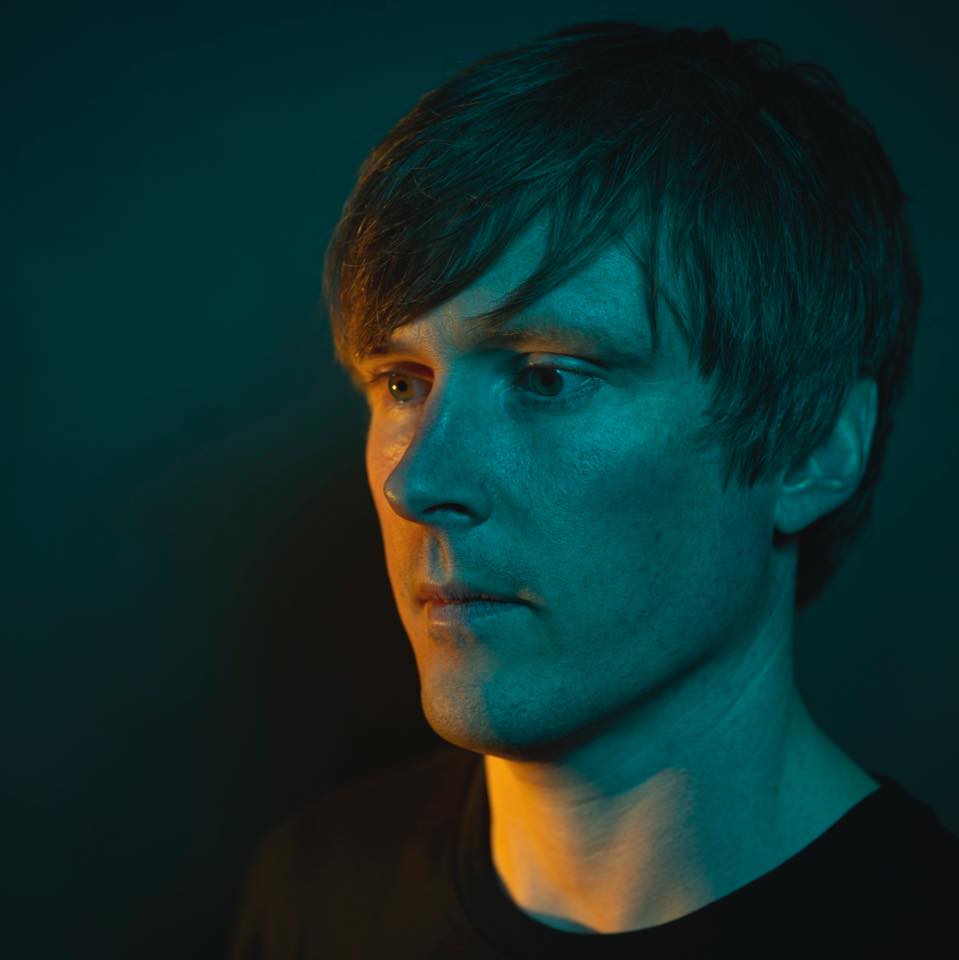 Moulding the classic song-writing sound of Paul Simon with the laid-back nature of Jack Johnson, Ben draws inspiration from the greats while injecting his own wit and imagination for lyrics which perfectly encapsulate relatable experiences to make you smile. As a guitarist, Ben has worked with Grammy award winning producers, appeared on BBC 1, ITV and Channel 5, and played concerts supporting major artists such as Nile Rodgers and Chic, Will Young, Mick Hucknall and Lisa Stansfield. He has supported artists on European tours and at festivals around the world including South By South West Festival in Texas. 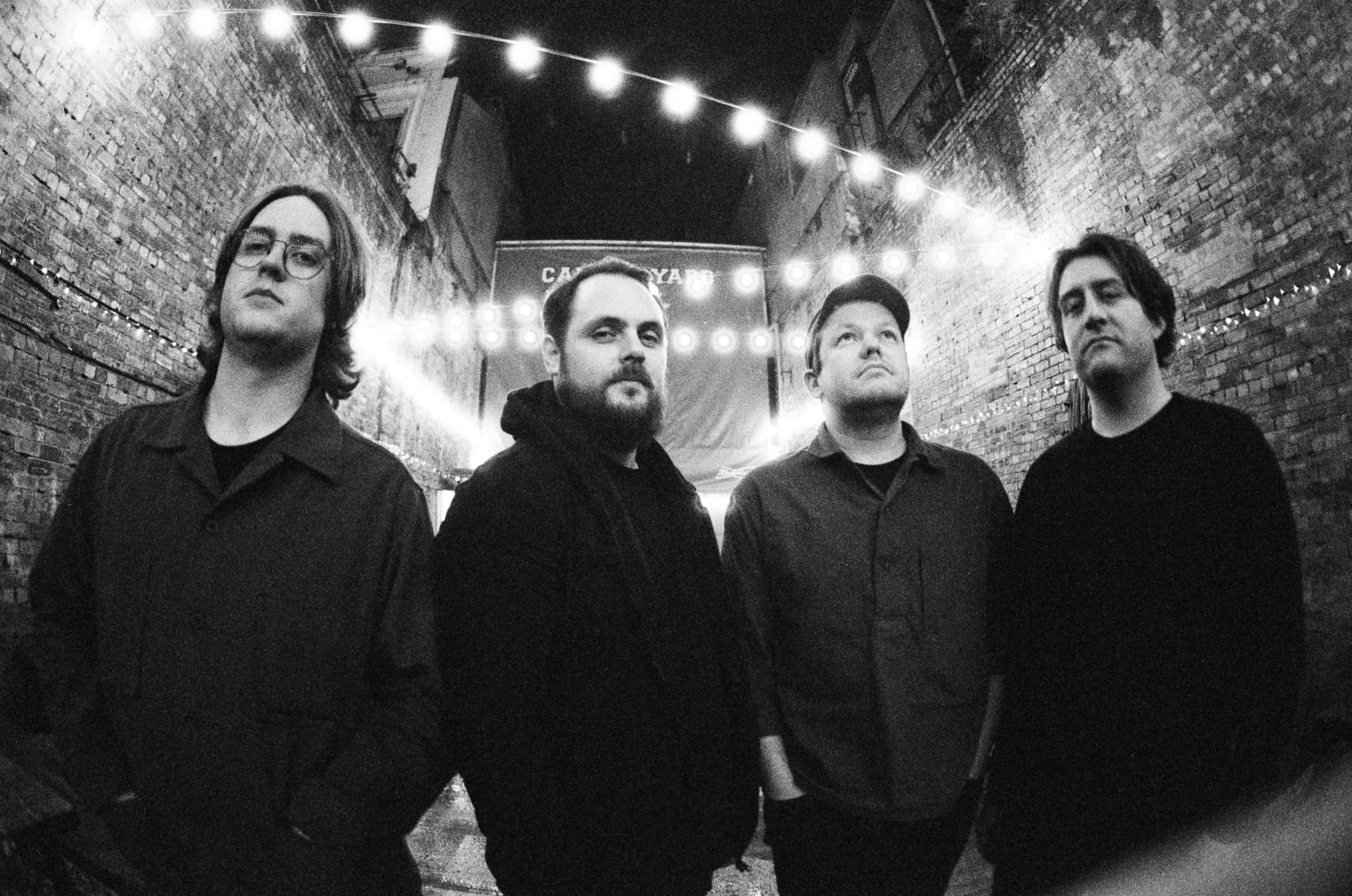 Established in late 2014, Ist Ist have forged a formidable reputation on the back of uncompromising, intense live shows at prestigious Manchester venues such as The Ritz, Gorilla and The Deaf Institute. Through word of mouth, they have grown organically in size without label or management support to the point where they are outselling established touring bands. Accompanying these live shows, the band have released a string of singles which received critical acclaim from independent publications and generated regular airplay from Steve Lamacq on BBC Radio 6. Regularly drawing comparisons to post-punk royalty Joy Division and Interpol whilst being condemned as too ‘out there’ to be successful; through sheer determination, hard work and a bulging catalogue of songs, Ist Ist continue to silence the doubters and move from strength to strength. Displaying an arrogance akin to the greatest Manchester bands, Ist Ist are constructing their own mould rather than attempting to fit into one. It’s time to listen. 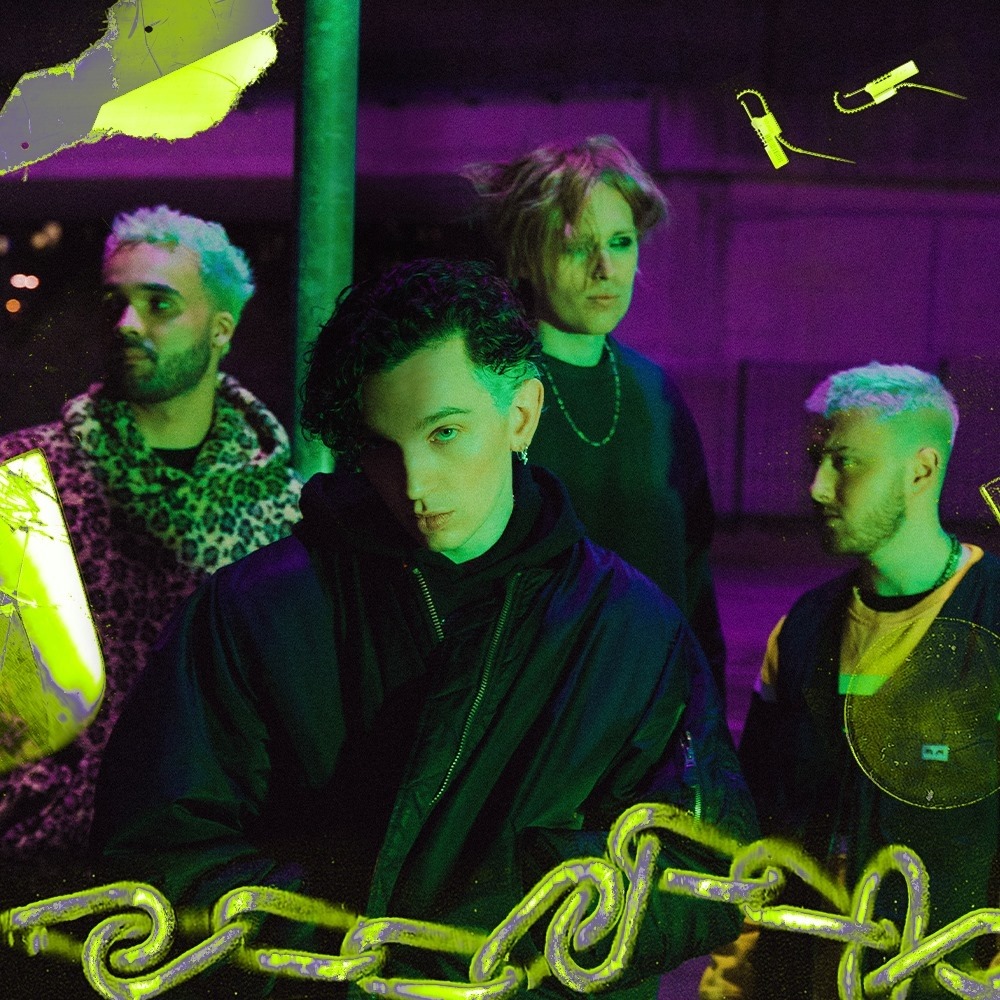 Born and raised in Glossop, Josh (vocals) and Dom (guitar and synths) began playing music together at school. The band started to blossom when they started studying at college together, sneaking into the college studio after hours to record what they had written in English class. Henry (bass and synths) and Joe (drums) later joined the band, bringing variety with their funk and rock influences and Larkins were finally able to create a sound that they had pictured in their heads.

The Brandy Thieves certainly know how to put on a show! With band members heading in different directions, their gig this weekend marks their last gig for the time being in Leicester. Having been together for 10 years and being a key member of the local music scene, we caught up with them to find out what’s next.

Tell us about The Brandy Thieves and everything you’ve done together as a band?

The Thieves formed almost a decade ago and I (Cain), Andrea, and our original drummer Bernardo all moved to Leicester around the same time. All of us had a similar idea, let’s start a band as that is a good way to meet people in a new city. Shortly afterwards, Joe joined on trumpet and vocals and the Brandy Thieves were born. Since then, we have played countless gigs and festivals across the UK, Ireland and Europe and built a good international fan base. We have shared stages with the likes of Therapy, Skinny Lister, The Dub Pistols and many more!

How special will this upcoming gig be for you??

Cain: This isn’t our final gig by any means. We have a lot of unfinished business to take care of so don’t worry, The Brandy Thieves will be back.
Andrea: This show has been a long time coming and I hope sometime in the future you will see us again in some form… keep your eyes peeled but we have all got other commitments currently so it may be a while!

What made you choose The Donkey as the venue for this?

The Donkey is an iconic Leicester venue that is very close to our hearts for so many reasons – we filmed the video for our track Bless me Father there and have performed sell-out shows there over the last 9 years. The Donkey and its crew past and present feel like family to us and they have also had their fair share of ups and downs through the pandemic, so it was an easy choice to do this big celebration to see my fellow founding member Brother Cain and his partner off in style. 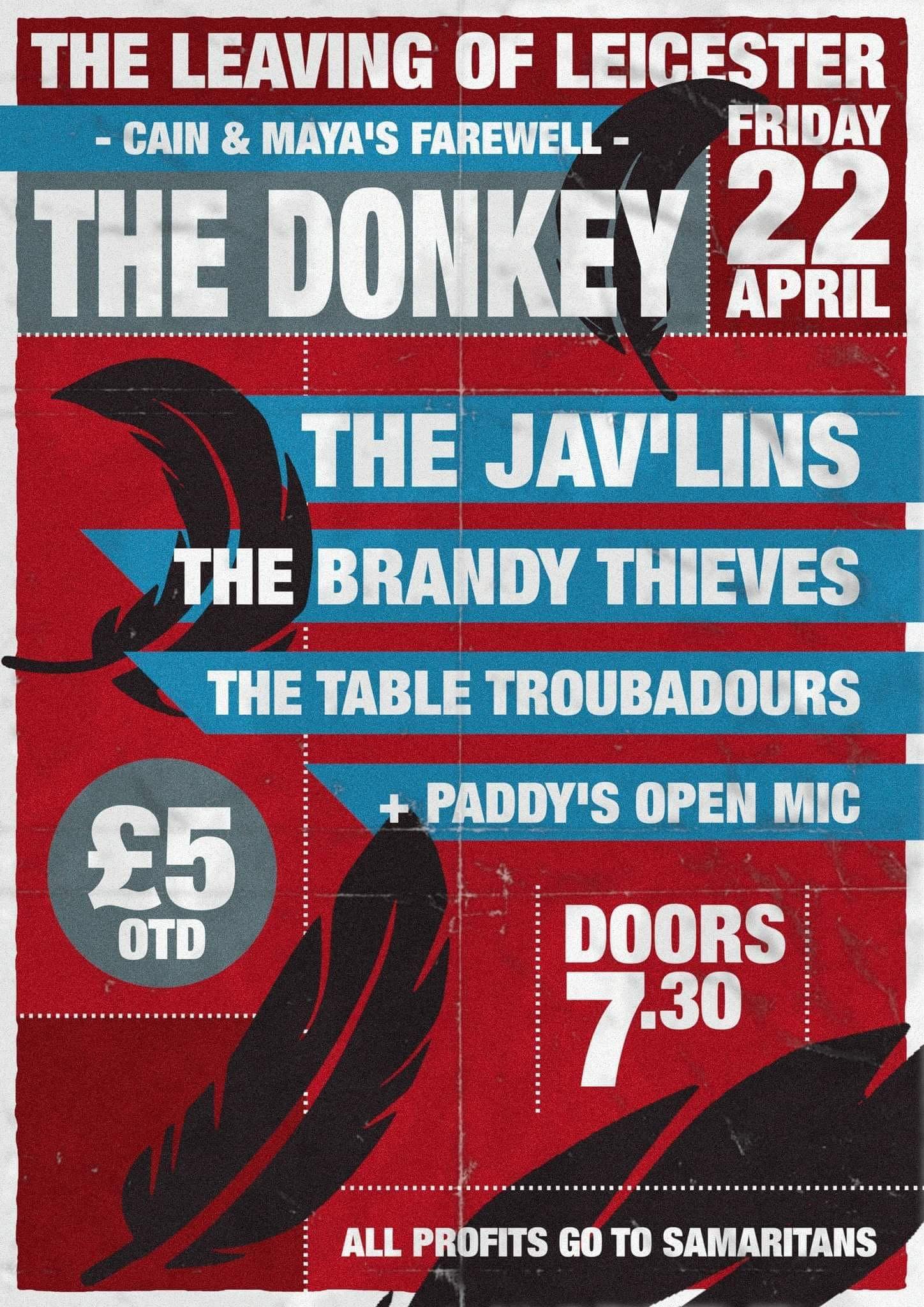 What can people expect from the gig?

Total Joyous Carnage!! We’re doing a short but sweet set of our personal favourite tracks to perform. So some people will be very familiar with, some less so. We promise you will be pleased though! Support comes from The Table Troubadours who are Cain’s (bass) and Joe’s (trumpet and vocals) project after The Brandy Thieves – expect some gorgeous Americana style country and harmonies. We chose one of our favourite Leicester bands to headline over us (mainly so we can get on with the important business of enjoying the music and getting pissed!) The Jav’lins. We have played with these guys countless times over the years and we just love their foot stomping sweaty energy. If you haven’t seen them yet, so will you! Expect some strong emotions also for sure. This may be the last time we all perform together as The Brandy Thieves, our lives are taking us all in different directions now but bloody hell its been a ride!!

What do each of the band members have in store after this?

Andrea: Cain is off back to his home country of Northern Ireland to be closer to friends and family. Joe is now fronting The Table Troubadours who have really exploded so that will keep him busy. I am starting a Music Therapy MA in September! Super excited. It’s a career I have wanted to do for many years! You can still catch me with my solo project and band Token Boy though. The rest of the boys have various life commitments including children and other musical projects. Keep your ear to the ground for it as we are all very supportive of each other so will be shouting it out when that happens

What do you think makes the Leicester music scene so special?

Andrea: Leicester has produced some hugely talented and well known names (Kasabian, Easy Life) but what really makes it special is how the grass roots underground scene all support each other. Musicians, bands, venues and our fans, we are all like a big sprawling family of connections all routing for each other and wanting each other to do well….THERE’S SO MUCH LOVE HERE! 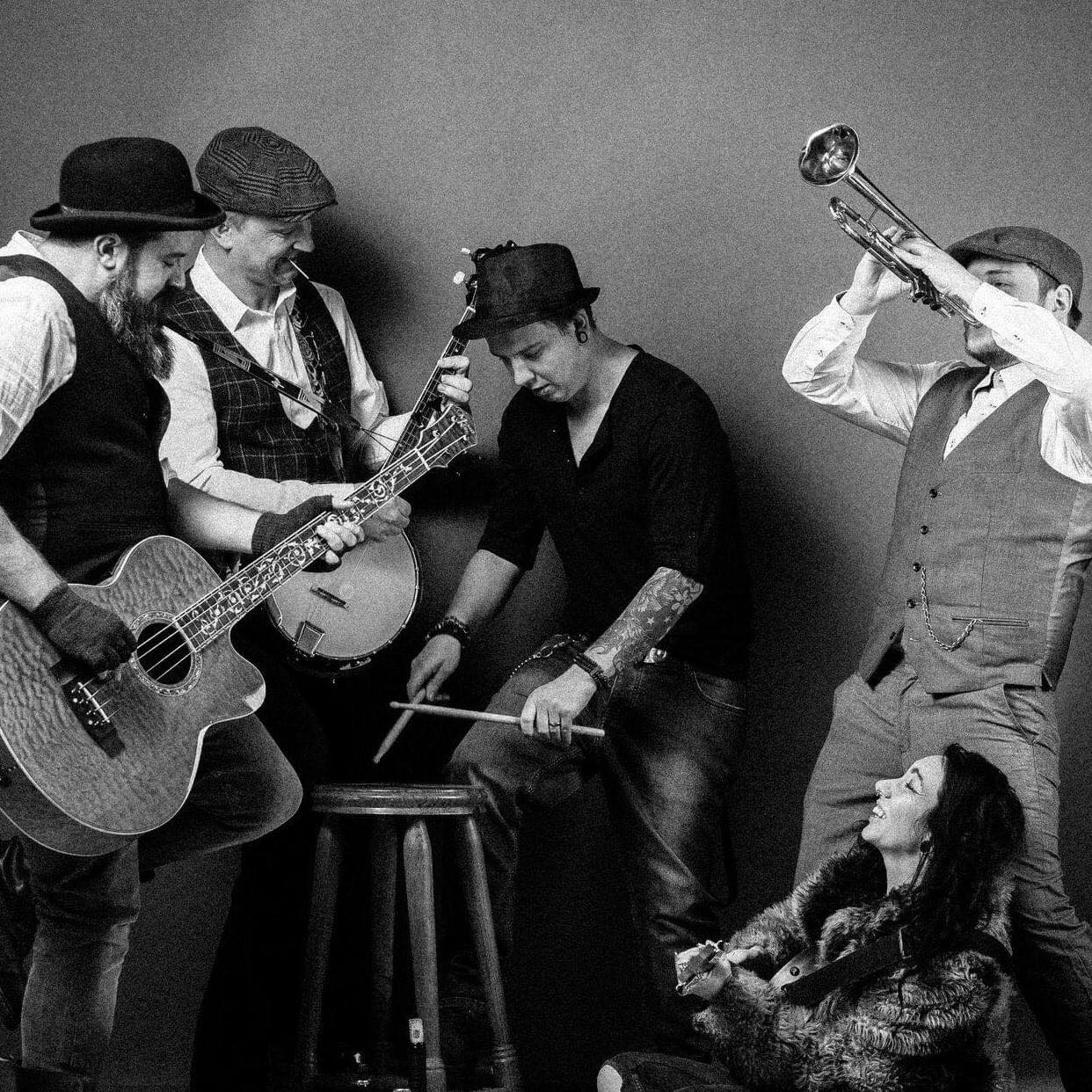 If you hadn’t been in The Brandy Thieves is there another band you’d have liked to be part of?

Cain: No chance! We are The Brandy Thieves!

Where can people hear more from you and the individual members’ solo projects?

Cain: The Table Troubadours are certainly a band on the rise. Featuring Joe from the Brandy Thieves on lead vocals, guitar, trumpets and whistles, Paddy our former roadie on mandolin, slide and guitar, and Ollie our former sound tech on percussion. Also in the line-up is Kenny Cassels on guitar and vocals and up to this point Cain on bass. They have already supported the likes of Hayseed Dixie, The Urban Voodoo Machine, and the Band from County Hell.  Tim our accordion player is currently touring Spain with his solo project TC Costello and Chris has got back together with his old band Neon Sarcastic who are due to be playing the Y Theatre soon. Seb has the surf garage band Mystery Action.

Andrea: My solo project (made up of Malcolm D’sa, Helen Collins and Natasha Patterson – all very well known Leicester musicians in their own right!) will be performing a few Leicester shows in the coming months and hitting some national festivals – you can follow us at andreakennymusic on fb and also insta).

Tickets to see The Brandy Thieves and Table Troubadours supporting The Jav’Lins at The Donkey on Friday 22 April will be £5 on the door.