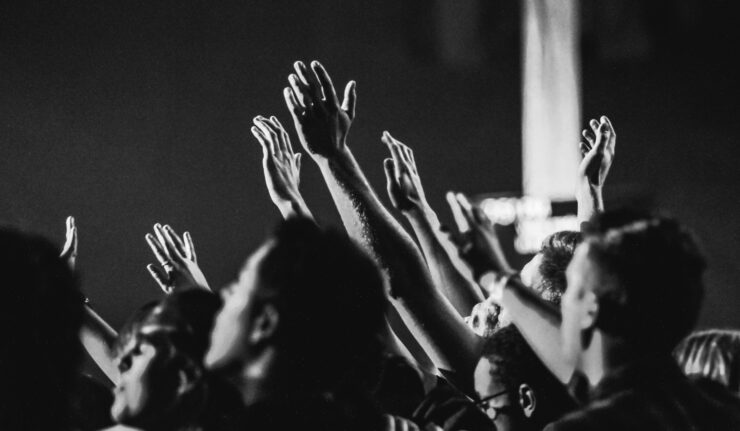 Described as “intensely original”, Dry Cleaning are a 4-piece from South London channeling post-punk and new wave pop with a side order of low slung Americana. The create mostly spoken lyrics to a bed of crunching guitars, sounding like a female-fronted version of The Fall and hints of the mid-90s band Linoleum. Tickets on sale on Friday.

In 2007, The Enemy emerged from their working class roots in Coventry to become one of the biggest new bands around. Their debut album ‘We’ll Live And Die In These Towns’ went straight to #1 and would later be certified Platinum in recognition of over 300,000 sales. Now for its 15th anniversary, they’re reuniting. Support comes from the brilliant Little Man Tate. Tickets on sale on Friday.

Pontefract four piece, Glass Caves, fuse agitated rhythms, yo-yoing guitars and dissonant keyboard sounds with vocals that splinter then soar through their songs. They come at you like a band channelling the spirit of American alternative bands, such as Local Natives and Fleet Foxes, through a very British filter to produce perfectly formed morsels of ballsy alt-rock.

Are you at the sold out Easy Life hometown gig on Friday? Keep the party going at the official after party with DJ sets by the Easy Life boys and their pals Murphy’s Law. At 2Funky Music Cafe from 11pm until late.

An American group who started out as an Appalachian style tribute to AC/DC, playing traditional instruments such as fiddle, mandolin and banjo. Following the release of 2001’s ‘A Hillbilly Tribute to AC/DC’ they branched out, playing songs by other rock luminaries, as well as a few original compositions. TICKETS

OMD’s (Orchestral Manoeuvres In The Dark) new tour will see the band perform songs from their iconic album ‘Architecture & Morality’, plus many more hits from their legendary back catalogue. TICKETS

Daytime TV (formerly called Hunter & The Bear), a band described by The Huffington Post as ‘the heroes British rock needs right now’, released their debut album in 2017 which entered the iTunes Rock Chart at number 5. They then signed with X-ray Touring and undertook two sell-out UK tours. As Daytime TV the band are collecting a new army of fans and their album, NOBEW, is out in February 2022. TICKETS

Glasgow three-piece Baby Strange are Johnny Madden, Connaire McCann and Aidan McCann, the newest evolution of punk rock’n’roll. They have toured tirelessly in recent years, building an enthusiastically rampant live audience and fully maintaining their DIY ethos by creating their own artwork and videos. ‘The Glasgow three piece are all leather jackets, spit and snarl. Rama lama guitar thrills set to fire up a new generation, this is snotty disobedience, outright deviance set to guitar, bass and drums” – Clash.

Sharing new work can seem daunting, but the team at Rough Draft have created a supportive community that comes together once a month so artists can share what they’re working on, find new collaborators and receive constructive feedback to help them move the project forward. From theatre to music to comedy to poetry, nothing is off limits. We caught up with them to find out about this month’s event.

How would you describe Rough Draft for anyone who isn’t familiar with it?

Rough Draft is a monthly night where creatives can come together and share what they’re working on. We book three acts and they can bring anything – a play, poetry, music, dance – anything they’re working on and want constructive feedback on.

How has the event transitioned from being online during lockdown to back in person?

Lockdown was difficult to keep the momentum going as Rough Draft is such a sociable event and not everyone has the resources at home to do online sharing. We focussed mostly on championing local creatives who were involved in streamed shows, such as 14/48 Theatre Festival, and arranged “watch-alongs” so you could still have that vibe of a collective experience that makes live work so brilliant.

What’s your favourite thing about your venue, The Y Theatre?

The Y Theatre has always believed in supporting local creatives which is quite a challenge for an independent, non-funded venue.  We host our nights in the bar which gives it a really informal feel, like you’ve just got together with a bunch of mates to have a fun evening. Plus, it’s Leicester’s oldest theatre so you can’t really beat that!

The event covers music, theatre, poetry and more, what have been some of your favourite works to have come out of it?

We had a piece called Life Drawing by Francine Gardner – it was just a few pages when it was brought to Rough Draft but from the feedback Francine received the piece grew and during lockdown premiered online as part of the Cockpit Theatre’s zoom play programme. I think something else that really stands out is some of the comedy we get – In January we’ll be running our Leicester Comedy Fest pre-show, where performers who have a show in the February festival can have a 10 minute slot and show off what they’ll be bringing to the comedy festival!

Who are some of your favourite musicians and performers in Leicester?

There’s too many!  We’ve had some of the more well-known names in their circles, like Jess Green for performance poetry, and Ki Shah with her solo improv, but we’ve had a lot of lesser-known gems as well – singer/songwriter Caroline Rowland and poet Charles Wheeler.  It’s lovely when you feel like you’ve been a part of someone’s journey as an artist.

What is it about Leicester’s arts community that makes it so special?

Leicester’s arts community is one of a kind. For such a big city it can really feel like sometimes you’re in a village. It’s a really supportive environment to be part of, there’s always someone to turn to for advice or talk an idea through with and people are always happy to recommend work for each other. We’re also such a melting-pot of cultures that we’ve got the experiences to create really fresh and exciting work.

How can people find out more or sign up to take part in the event?

How can people watch the event?

Come down to the monthly night at The Y Theatre – we’re the fourth Tuesday of every month so our next one is Tuesday 23rd November, 7.30pm.  The show is completely free and it’s a great place to see exciting new artists as well as find collaborators for your next project.  We’re not yet able to stream our nights, but if someone’s got the set-up and wants to get involved do shout!

Keep up to date with Rough Draft via Facebook.