We chat to Handmade Festival organisers about their award nomination 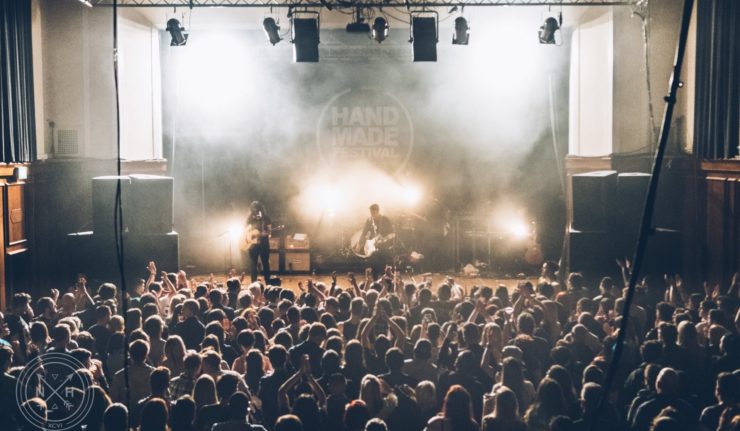 Big news for Leicester’s Handmade Festival, which has been nominated for the ‘Golden Welly’ Award for Best Independent Festival at the Association of Independent Music (AIM) Awards. The festival has been shortlisted alongside household names like Dorset’s End of the Road, London’s Lost Evenings and Cardiff’s Swn Festival.

The Festival, celebrating it’s 5th year this year, is a collaboration between local promoters and venue operators John Helps, Matthew Kirk and Nik Sharpe and focuses on new music and rising talent. As well as four stages of live music the festival also covers comedy, film, visual art and performance.

We caught up with 2 of the organisers, John and Nik, to find out what the nomination means and, more importantly, how you can vote for them!

Congratulations on your award nomination, how does it feel to know that you’ve been shortlisted for Best Independent Festival?
Nik: It’s great to be nominated amongst some other great events, it really makes the hard work worth it.
John: Yeah, any recognition is great, but to be counted alongside festivals you look up to is all the lovelier.

Was this something that was on your list of festival goals when you first started Handmade Festival?
Nik: Getting any recognition from the industry and your peers is always great but for me it’s always been about making sure the public are the one’s that are happy with what we do. So if we won this based on our festival goers voting for us it would make it even better!
John: It was definitely something I was aware of the festivals I liked being in the running for, so I think subconsciously it was.

Which other independent festivals are you a big fan of?
Nik: Dot to Dot in Nottingham is great as is Live at Leeds, Hit The North and 2Q. They’re all great multi venue events that are ran by great teams of promoters.
John: I’ve been going to 2000 Trees in Gloucestershire for about seven years and to ArcTanGent near Bristol since it started and I love them both dearly. Their organisers are incredibly supportive of Handmade. The gem of the idea for our festival actually came from talking to the organiser of a brilliant little festival in Birmingham called Off The Cuff that sadly doesn’t exist anymore, but that holds a special place in my heart too.
What were your highlights of Handmade 2017?
Nik: IDLES! They stole the show on Sunday afternoon with an incredible set. People haven’t stopped talking about them since the show.
John: Gallops and Pulled Apart By Horses for me. And seeing Leicester bands like Kermes and Ash Mammal getting the sort of reception they deserve on the main stage was hugely rewarding.

How has Handmade Festival changed since your very first event?
Nik: The festival has changed quite a bit since the first few years but most importantly it’s kept its core values and ethos.
John: On paper it’s almost unrecognisable from the first year. Every year it gets a little bit bigger, and necessitates certain changes, but it’s the same team and even many of the same volunteers as those early years, and like Nik says, we stick to what we were trying to achieve – just bigger and hopefully better.
Who’s been your very favourite act from all of the Handmade Festivals?
Nik: Again, i’m going to say IDLES. They were a pretty much an unknown band but they filled Academy1 and to still have people talking about the show 4 months later speaks volumes.
John: We’ve had Grace Petrie, Her Name Is Calla and Katie Malco almost every year, so that probably says something about those guys – but And So I Watch You From Afar in year two were a real special booking for me. So much energy.
What have you got in the pipeline for Handmade 2018?
Nik: 2018 is about growth and giving more opportunities for local emerging talent to play alongside even bigger headline names. We’re also looking to art side of the festival with some interesting production ideas to make Handmade a unique experience.
Which other festivals are you heading to this summer?
Nik: Not many for me this year. Just Kendall Calling this summer, it would be great to go to more events but the summer is a really busy time booking shows for this autumn and spring next year.
John: I just got back from 2000 Trees, and will be off to ArcTanGent in August and Tramlines in Sheffield later in the year. I’ll also be heading to some European festivals that I’ve not checked out before in the autumn.
Why should people be voting for you to win?
Nik: I think people should vote for Handmade because we support emerging talent and we have a positive social and economic affect on the city. Handmade is now part of Leicester’s cultural landscape and we want to keep building on that yer and year.
John: We try to be a festival that Leicester can be proud of, and voting for us would help us be a little better at that. It feels like we’re slowly becoming an important part of the festival season nationally, and that has implications in terms of bringing acts to the city through the rest of the year – so I feel like anything that helps do that is worth supporting.
How can people vote and what’s the deadline?
John: They can vote by visiting the site HERE and voting closes on Monday 24 July.
Next year’s Handmade takes place on the 5th & 6th May 2018. Early bird tickets are on sale now.
previous article
Enjoy Sunset Gin & Canapés Aboard Rutland Belle
next article
Exclusive Arctic Experiences To Take Off from Nearby East Midlands Airport