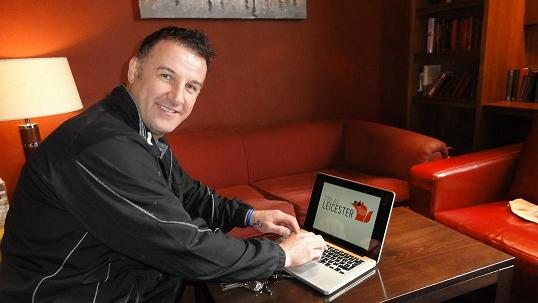 We’re delighted to announce that former Leicester City captain, Wembley goal-scorer and all round local legend, Steve Walsh, has signed for Cool As Leicester. This exciting addition to the website will see Walshy giving us an exclusive weekly blog and insight into the beautiful game. Every Friday you’ll be able to access the latest news, views, events and competitions direct from Walshy. For every Leicester City fan, every Friday, this is the place to be! Cool As Leicester – Cool As Walshy.

As we’re heading towards this season’s Play Offs it’s a great time for me to be signing with Cool As Leicester. The Play Offs will always hold a special place in my heart and I suppose it’s those Wembley finals that cemented my place in Leicester’s history.

This season I predicted Birmingham all along to come good and win the Play Offs. Chris Hughton has done a great job at the club and they’ve produced some fantastic results this season, like the recent 2-0 win over Reading. Unfortunately, they couldn’t quite overcome Blackpool, but we all know how the second leg of the Play Off semi-final is a nerve wracking game. I’d always rather be at home for the 2nd game, you know what to do and can try to lead the situation. Although having said that, we at Leicester have done it the hard way on a fair few occasions! For Blackpool it was always going to be a big ask to get past Birmingham, so massive congratulations to them! Steve Thompson, assistant manager at Blackpool, is a good friend of mine and played for, in fact even scored for, City in the unlucky 1992 Play Off Final defeat to Swindon! Scoring that equaliser at Wembley is one of the greatest feelings of ecstacy that a player can get! He’ll know first hand from then just how important these occasions are!

The Play Offs are a special competition and it’s safe to say that runs of form can count for nothing when it comes down to the individual games. Everything, especially the pressure you face is immense, but the potential reward is immeasurable. It takes big players with big personalities to show the strength to combat the inevitable nerves. Playing at Wembley is always a massive occasion! I was lucky enough to play there 8 times, 7 times with Leicester and once with Wigan, and the glamour of the occasion is second to none! When you look back on the 1992 final against Blackburn, it was a boiling hot day and hell for those playing, but things like that only serve to make it more memorable. We lost in both 1992 and 1993 by arguably dodgy penalty decisions, but scoring the winning goal against Derby in 1994 and captaining the team against Crystal Palace in 1996 have firmly cemented the Play Off Final as one of my favourite matches of the season.

Unfortunately Leicester aren’t up there this season and I’ll be honest, I really thought we would be! From the start of the season I expected Blackpool, Birmingham and Cardiff to be challenging, but my other prediction was always Leicester. It will be an interesting summer for Nigel, with big teams like Blackburn coming down and challenging in the Championship. Clubs like Sheffield Wednesday and Charlton will be looking to do well and expecting big things next season. It’s becoming a very difficult league to get out of. At the other end of the scale I predicted Coventry to go down after the first game of the season against them. Looking to Doncaster as well, they’ve spent a lot of money but it proved that that isn’t always enough. When Leicester went down to League 1 we bounced straight back, but I think the likes of Coventry and Doncaster are going to find that a big ask next season.

It’s been a frustrating season but I’m a big believer in Pearson and always have been. There are key players like Schmeichel and Nugent, who they need to be very careful to hold on to, but then others like Mills and Beckford who seem to have fallen out of favour. Can they still play a part? It will be interesting to see what happens but any transfer talk at the moment is pure speculation, so we’ll have to wait and see. There have been definite plus points that we can take from the season, especially the FA Cup run and the win against Norwich. That proved that we can challenge those teams and we’re not too far off where we need to be. With a bit of extra added steel next season can hopefully be our time. The most important thing is that the players and fans get behind the manager and get the club back to where they belong.

Win! Win! Win!
To celebrate the launch of my new blog with Cool As Leicester I’ve got a great prize to give away to one lucky winner! In celebration of the Play Offs I’ve got a copy of the shot of Martin O’Neill and myself celebrating the final whistle against Crystal Palace in 1996 and I’ll sign it for you too. To be in with a chance of winning just answer the following simple question:

How many Play Off Finals did I play in for Leicester City?

Email your answers to [email protected] before midday on Friday 18th May to enter. Don’t forget to include your address incase you win.

Before I go let me just tell you about some of the upcoming events that I’m working on at the moment.

At the end of July I’ll be hosting a Legends 5-a-side tournament with the likes of Muzzy Izzet, Matt Elliott, Gerry Taggart, Serge Pizzorno and many more. Enter a team, photo opportunities, family fun and a great day out. More info HERE.

If golf is more your sort of thing then we’ll be hosting a charity golf day on Friday 29th June at Glen Corse Golf Club. Myself, Muzzy Izzet and Matt Elliott will all be playing, as well as Gerry Taggart, Steve Guppy, Ian Marshall and cricket legend Paul Nixon. Refreshments, prizes, memorabilia, raffles and much more, you can find out further info HERE.

Thanks to everyone for reading and I’ll see you back here next week! In the meantime you can follow me on Twitter @SteveWalsh5.