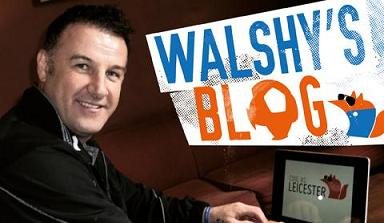 I know you’ll all be reading this a few days late but today’s a special day for me as I write this – 30th May, does the date ring any bells? Yep, that’s the day we beat Derby in the Play Off Final and finally made it into the Premiership. Geoff Peters was presenting on BBC Radio Leicester that day so we had a bit of banter with the Derby fans on Twitter last night! 18 years, how time flies!

It was an odd one preparation wise on the day because I didn’t even know if I was going to be playing! I’d had a bad knee injury and had only played once in 7 months. I remember the sea of blue at Wembley and the fantastic support we had on the day. Pulling up to the gates at Wembley is one of the most emotional experience you get as a player. Grayson was captain that day and coming out to the ovation we did was something I’ll never forget. In all honesty we didn’t play as well as Derby but for me to get 2 goals, especially with the injury, made it even more special. Plus it was against Derby, so that’s always going to make it sweeter for the fans and players!

However, away from past glories we’ve got the launch of the fixture list to look forward to! There are certain fixtures you always look to as a player – Christmas, birthdays, special family days and obviously the first and last days of the season. It’s always nice to have a home game to kick off the season, and just as importantly a game that you think you’ll be able to win! As for the last game, well that’s always a nice one to have at home with the hope that you’ll be having something to celebrate! Fingers crossed for next season!

Euro 2012 is only just around the corner now and it’s fantastic that we’ll have some LCFC representation in the tournament. Both Kasper Schmeichel and Sean St Ledger will be playing and we wish them all the best. I spoke to Sean at the end of the season and said to have a good holiday but he kindly reminded me that hopefully he’ll be over at the Euros! He and Kasper have a great opportunity for experience this summer but fingers crossed we won’t be getting any injuries!

The other big news this week is the event we’re organising with Mike Tyson. This special “Evening with” event will take place later in the year at a city centre location. We first thought of the event in March but we weren’t able to tie him down, however we’ve now been in full planning mode for the last 3-4 weeks. I’m co-ordinating the event with Shane Whitfield and Stephen Geeson of JSS Drinks and it’s all set to be a fantastic evening. Tickets are already selling fast with 35 out of 50 tables already snapped up! On the evening More Restaurant will be providing the food (which we’ve already sampled so I can promise it’s going to be amazing!) and Lakhani Interiors will be decking out the hall for us! Tickets for this event aren’t going to be around for long so make sure you grab yours now by contacting Sira on mailto:[email protected]or 07511959279.

Other upcoming events include the Golf Day on Friday 29th June at Glen Gorse, which is a fantastic course in great condition. There are still team available so make sure you book now. Myself and Matt Elliott will even be captaining teams! If golf isn’t your game then why not enter a team for the 5-a-side footy at the end of July? We’ve already got 35 teams but there’s still a bit of space. Don’t miss the chance to play against the legends!