The festive season is well and truly upon us. You’re finishing work, you’re wrapping presents, you’re meeting friends for drinks and food. Lots of drinks and food. Want to know the Christmas delights you mustn’t miss out on this year? Read on.

Chocolatesphere cocktails are The Turkey Cafe

The Turkey Cafe has teamed up with Cocoa Amore to come up with some festive cocktails that look and sound and taste too good to be true! Within a chocolate sphere from master chocolatiers Cocoa Amore you can enjoy an After Eight or Milk Chocolate Orange cocktail.

Festive treats at The Criterion

Now, it’s no secret that we think The Criterion do the best pizza in Leicester, but now they’re pulling warming Christmas treats out the bag too. Ever sit in a pub and just want to eat no fuss festive fayre? Yeh, us too! With all of the overpriced Christmas menus doing the rounds it’s great to know that we can just go to the pub, have a beer and enjoy Christmas cobs (with turkey, sausage, stuffing, roast potato and thick gravy in a bap), cheese and port, mince pies, Christmas pud or even warm cinnamon dough balls without having to move and without breaking the bank either!

Meatcure have pulled 2 festive specials out the bag this Christmas with Bad Santa and The Piggyback. If we had to pick between the 2 The Piggyback has just edged it for us. This one was actually designed by one of Meatcure’s regulars and contains Beef patty, melted cheese, pork belly, pork crackling and smoked bacon. Available until the end of December to pig out.

Yeh, we know, everywhere does Christmas themed drinks now, but they’re not all as good as this! Forget your Costa and Starbucks and support one of Leicester’s best independent coffee shops, St Martin’s Coffee. This year they’ve got the Snowball Hot Chocolate, Spiced Pumpkin Latte and the Chocolate Orange.

You can’t beat Leicester Market for picking up some fantastic foodie treats for Christmas and our highlight this year has to be the Shorrocks Cheese Bombs from Sherwins. Whether you’re a bit of a cheese fiend yourself or you want to give the gift of cheese to a loved one (who wouldn’t appreciate that?) then you can’t beat these bombs. In a variety of flavours and matured to a creamy and full flavoured taste, the only question is which flavour do you go for? 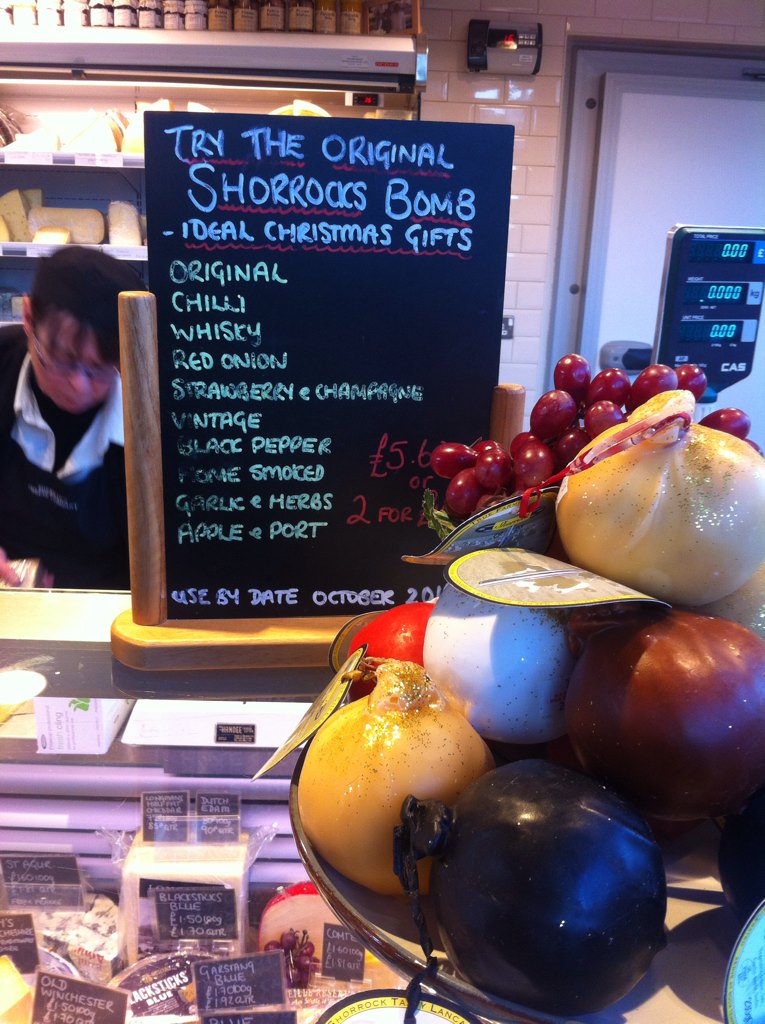