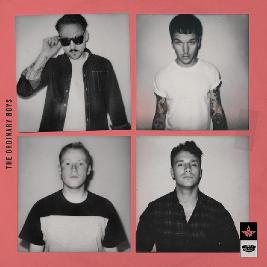 Remember these guys? Well after a break of nearly 10 years, The Ordinary Boys are back with their most definitive album to date and a date in Leicester at The Soundhouse on Wednesday 4 November.  Now you can check out their new single and also win 2 tickets to see them live!

With their new self titled album, a return to their former sound is no surprise, since the reformed line-up consists of the original trio – Preston, James Gregory (bass) and Charlie ‘Chuck’ Stanley (drums) – plus new member Louis Jones from celebrated power-pop band Spectrals on guitar. Preston met Louis stage-diving at a Cribs gig and, “knew immediately that I wanted him to be my new best friend/collaborator.”

Over the last year they have been busy writing and recording their new album and have enlisted Rory Atwell (the Vaccines, Veronica Falls) and MJ (of Hookworms) on production duties and Dan Lancaster (Bring Me The Horizon, Lower Than Atlantis) for mixing.

After a brief stint in the limelight following his appearance on Celebrity Big Brother in 2006, Preston has spent the last 8 years building a solid reputation as a successful songwriter, having written hits for John Newman, Nas, Example and a Number One for Olly Murs with ‘Heart Skips A Beat’.

However, as fulfilling as his “day job” is, Preston says, “hanging out with Louis, all we wanted to talk about were the punk and hardcore bands that had made us pick up guitars and form bands in the first place. I made Spinal Tap-esque phone calls to James and Chuck. After promising several times that it wouldn’t sound anything like the questionable third album, we met for some beers and started rehearsing. We were 15 again.” That ‘questionable’ third album ‘How To Get Everything You Ever Wanted In Ten Easy Steps’ scored the band three Top 10 hits in 2006. Its predecessor, 2005’s ‘Brassbound’, was also a Top 20 hit, as was its lead single ‘Boys Will Be Boys’, which was re-issued in 2006 and went to No.1 in the UK charts.

“We think we have made a really special, exciting record,” Preston says. “One that has been fuelled by reunited childhood friendships, new friendships, rediscovery of the records that shaped us, and the drive to create something undeniably great. I’ve had the best year of my life making this album and we are so excited to finally be able to share it!”

New single Four Letter Word is out now and you can enjoy the video below. The self titled album is released on Friday 2 October.

The band have just announced a 27-date UK tour for this October and November, and they’ll be hitting Leicester on Wednesday 4 November at The Soundhouse. Tickets cost just £10 and are available from HERE or in person from The Soundhouse.

WIN
We love a giveaway and so we’ve gone and grabbed you 2 tickets to see The Ordinary Boys in an intimate show at The Soundhouse in November. To enter all you need to do is answer this easy peasy question and fill in the form below:

Which reality TV show was Preston on?