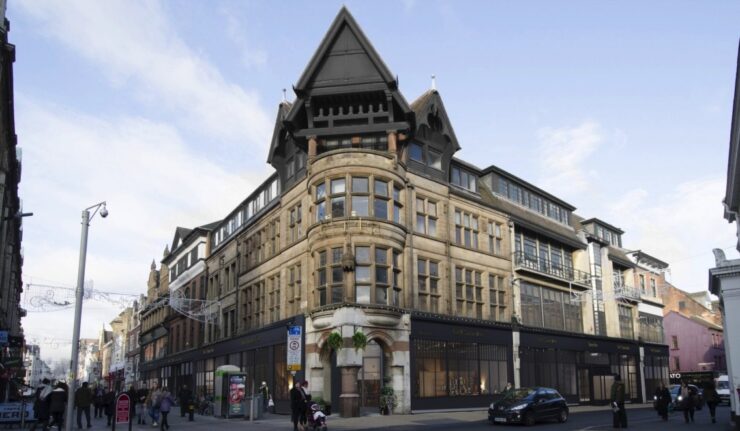 Work is going full steam ahead on the former Fenwicks site in Leicester.

The iconic, Grade II listed building at the corner of Belvoir Street and Market Street has now been rebranded ‘The Gresham’, which came from its original name when it was first built in the 1800s.

The new owners, Aimrok Holdings, are spending £17 million transforming the former department store into a stunning, high-end 133-bed aparthotel (made up of 1 and 2 bed serviced apartments) with lobby bar/restaurant and top-of-the-range fitness suite, as well as four prime commercial units and 12,000 square feet of state-of-the-art Grade A office accommodation and flexible meeting space (which has already been leased by Leicester City Council.)

The new-look, reimagined building is already taking great shape. Most of the inner structural construction is now complete and the interior furnishing is due to commence in the coming weeks.

With its prime position, The Gresham is being hailed as a catalyst for regeneration of the once thriving Market Street, and the surrounding area, which has seen a downward turn in recent years.

Director of Aimrock, Mark Copson, commented, “The Gresham now has six ‘level’ floors – including a top deck which houses four units with spectacular, unparalleled views over the city, and we have added a light well from the roof to the first floor, allowing natural light to flow into the heart of the building.

“We purposely set out to make The Gresham different from anything else in Leicester. It is an iconic and loved building and it deserves a superior look and feel throughout, to match – one I hope its original designer, Isaac Barradale, would have been proud of.”

previous article
Interview: Take your dishes to the next level with Dig In condiments
next article
Weekly Music Guide – 24.02.2021