Leicester Comedy Festival is one of our favourite times of year in the city, with so much going on across multiple venues we’re utterly spoilt for choice every night for a whole 2 weeks. If you’ve picked up one of the festival brochures then you’ll already know just how much there is to choose from, but where on earth are you meant to start in deciding which shows to go and see? Of course, there’s no denying that some of our best times at Leicester Comedy Festival have come from the nights with no plans, the ones where we stumble into town with a brochure in hand and just decide where to go as we pass through the city. However, sometimes it’s good to be organised so we’ve put together some of our top tips for you right here.

Quite unbelievably this year there are a whopping 63 venues involved in the festival, stretching across Leicestershire to Loughborough and Melton Mowbray, so if you’re out in the county there’s still plenty to enjoy. In fact one of our favourite comedians here at Cool As, Seann Walsh, is taking his comedy festival show over to Loughborough Town Hall on Friday 10 February. His One For The Road show sees Seann experience what it’s like to be a grown up now that he’s turned 30, moved in with his girlfriend and is expected to hang out with her friends and eat quinoa. We saw the work in progress of this show last year and Seann’s stage pacing, ranting and anecdotes are sure to have you in hysterics.

Back into town and some familiar festival faces will be back including Paul Foot with his surreal show ‘Tis a Pity She’s a Piglet at The Cookie on 22 and 23 February and Jarred Christmas, who’s now in his 16th consecutive year at the festival, with 3 shows at Peter Pizzeria, including his own hosted game show with plenty of laughs and prizes to win. 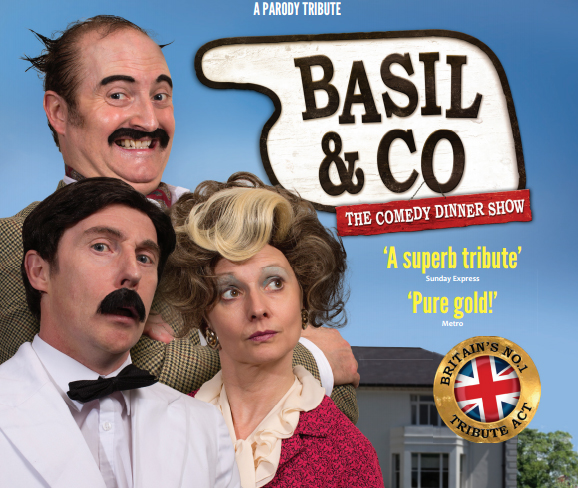 Over at Curve, The Sitcom Experience is here for 2 fantastic comedy dinner shows as you immerse yourself into either Fawlty Towers or Blackadder, enjoy a 3 course meal and sit back as the sitcoms unfold around you. With Basil yelling at Manuel or experiencing Baldrick’s useless plans first hand, both of these shows are sure to be a fantastic night out. If you enjoy the immersive experience then get down to Firebug on 15 February for their latest Midlands Movies event presenting Spinal Tap complete with live band. See Firebug transformed into the set of the movie, dress up and enjoy the experience as secret cinema comes to Leicester.

Of course, some shows have already sold out and if you weren’t quick off the mark then you’ve already missed out on shows including Joe Lycett and Jungle star, Joel Dommett, at The Cookie (although if you’re quick you can still grab tickets for Joe Lycett’s appearance at The Y for Bottle Rocket Comedy), but with so many alternatives there’s no need to be upset. Some of the shows taking place are even FREE. Yep, one of our picks of the free shows is Jo D’Arcy with her first one woman show, D’Arcehole at Exchange Bar on 14 February. Dubbed a “female Rik Mayall“, in her own words, the show’s about Jo teaching herself “not to be such a f**king dickhead“. For a fantastic selection of other free shows be sure to check out the listings from Jokes on Us who are bringing a fantastic range of free shows to Manhattan34, The Exchange and The Soundhouse. Among those shows is comedy musician Jon Long on Sunday 19 February with his show that earned him the Winner of the Comedy Store King Gong, and the Musical Comedy Awards Audience Favourite 2016.

Other shows we’re going to be checking out include star of ITV’s Bad Bridesmaid and BBC1’s Outnumbered Anna Morris, in her award-wining, smash-hit, sell-out comedy wedding show, It’s Got To Be Perfect, at Firebug on Sunday 12 February. A complete sell out in Edinburgh, audiences queued for hours to get a chance to become a guest at the improvised wedding rehearsal of Morris’s hilarious alter ego, dubbed as Britain’s biggest bridezilla. Morris lets the audience become the wedding planners: from choosing the walk-in music, to shouting objections and writing the vows – they take control of every aspect of the wedding rehearsal, sending Georgina into a free-fall, and making each show unique, hilarious and memorable. If you’re recently married, currently planning a wedding, have a friend planning a wedding, or just like a good immersive comedy show, don’t miss this!

Portraying the funny side of issues like mental illness, domestic violence and drug addiction takes a special kind of skill, but Katharine Ferns manages to do just that with her brutally funny storytelling show Katharine Ferns is in Stitches. The comedic journey about learning to laugh about the visible and invisible scars of surviving torid life events will be at Regent Sports and Social Club on 10 and 16 February and has been dubbed “The most incredible comedy performance I’ve ever seen” and “An incredible story that will make you laugh when you probably want to cry! This woman is amazing!”.

Another comedian we’ve seen in Leicester over the years but not one for the easily offended, Andrew Lawrence will be back for this year’s festival as he arrives at The Cookie on 21 February with his Hate Speech tour. Pretty much morally repugnant, come and have a hilarious night with “the comedy scene’s most bigoted scumbag“.

If you’re looking for faces you might know off the telly then you’re in luck with Johnny Vegas bringing his Unprepared but Ready show to Just The Tonic at Hansom Hall on 25 February, which is sure to sell out so be sure to book in advance. You can also see An Interview with Romesh Ranganathan at Curve, head down to The Cookie and catch Paul McCaffrey (BBC3 Impractical Jokers, Russell Howard’s Good News) on 24 and 25 February, or get out to Melton Mowbray and catch Jon Richardson at Melton Theatre on 16 February. Regular Mock the Week star, Gary Delaney, widely regarded as one of the most quotable one-liner comics in the country, will be at The Little Theatre on 17 February, or head over to Firebug on 11 February to see none other than Sarah Millican leading a lineup of female panelists chatting feminism and funnies for Standard Issue in Conversation. One for with the parents, if you’re a fan of Great British Bake Off don’t miss Sue Perkins at De Montfort Hall on 18 February with her show full of wit, tell tales and plenty of stories about Mary Berry.

Football fans might recognise Lloyd Griffith who’ll be at The Cookie on 18 February, fresh from his Taxi to Training vodcast with Christian Fuchs. It’s not all about football though as Lloyd discusses how he travelled the world, met Messi and fell in love, you can expect plenty of jokes and songs. Lloyd recently performed at the Comedy Festival Preview Show and wowed the crowd with his very surprising second career (you’ll have to go and see him to find out).

Also performing at the Preview Show was Carly Smallman, who’s the composer of this year’s official Comedy Festival song. Now, at the Preview Show Carly did sing a pretty weird song about fancying her brother, but we can put that aside for her show at Peter Pizzeria on 26 February where she’ll be performing alongside her dog. Go on, it’s worth a punt to see the dog.

There’s so much more to the festival, we’ve literally just scratched the surface. We haven’t even had a chance to mention the UK Pun Championships, the Comedian of the Year show or the brilliant stuff coming up for the kids during half term, including Patrick Monahan hosting the Pub Quiz for Kids at Peter Pizzeria. You’ll just have to grab a brochure for yourself, have a read and make sure you enjoy the festival!

Leicester Comedy Festival kicks off on 8 February and runs until 26 February.