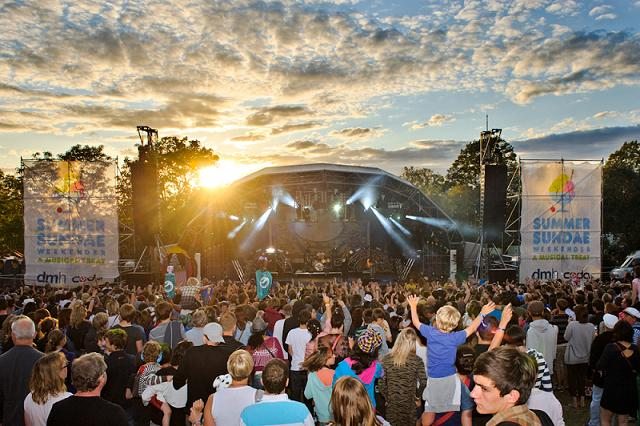 Summer Sundae, Leicester’s very own city-based festival, has been going for 11 years now so we sent along our little spies to see what all the fuss is about!

We all know the festival climate is up and down at the moment, but Summer Sundae has always managed to stay strong and despite some varying opinions on this year’s line-up we were still really looking forward to it! Firstly, what’s not to love about a festival which doesn’t require you to buy a tent (we live too nearby to possibly think about camping), which you don’t need to arrange travel plans for, which allows you to take your own drink into, which has indoor toilets (yes, indoor, proper functioning and flushing toilets), and which has a mobile Wagamamas on site? Even before looking at the music it’s already sold to me!

There’s a little bit of rain on Friday but we’re hardened festival goers, we can cope (what we actually mean is that we’re going home to our beds and able to shower at the end of the day so we care far less). Plus who cares about a little bit of rain when you’ve got the delightful De Montfort Hall to put a roof over your head? We nip inside to hear the soothing tones of Admiral Fallow and they don’t disappoint, just as they’ve busted out Squealing Pigs to the audience’s delight we head back outside and the sun’s shining again! As much as we were looking forward to Graham Coxon later on the undeniable hit of the day was Leicester band By The Rivers. If you haven’t these boys yet then put it at the top of your to do list for the rest of 2011! After some umming and ahhing about whether to watch The Maccabees we spotted a familiar face off the telly, it was only Mathew Horne! “Oh yeh he’s mates with The Maccabees”, we’re easily swayed so off to watch them we did. It was their first festival headline slot, a risky move, but it seemed to pay off, even if they did play too much new material for our liking.

We don’t have any children so the family areas of festivals are normally avoided, but we thought we’d take a quick look around for research purposes. Great facilities, great activities, you can make things, learn things and even decorate biscuits, which most importantly you then get to eat. Now then, the Showaddywaddy debate, to watch them or not to watch them? We’re generally lacking in taste and morals so we went to see what they had in store. What can we say? I think you had to be there to believe it. I didn’t hate it and the outfits were the brightest you’d see all weekend, but I wouldn’t urge you to spend your last pennies on a concert ticket to see them. However Saturday provided a feast of indie goodness as northerners The Heartbreaks played a fantastic set to a pretty busy lunchtime crowd on the indoor stage. After touring with Morrissey these boys look set to go far! For Saturday evening we drifted over to the Village and Rising Stage and enjoyed everything from Dionne Bromfield to Little Comets and Pete and The Pirates. We contemplated walked 5 minutes to the main stage for Newton Faulkner but the Wagamama Lounge and Orange Tree bar were more appealing. My mate said he seemed a nice guy though.

Sunday rolled around with a joyous hangover but that wasn’t going to put a downer on our day! The sun was shining and if there was still cider to be served then we’d be there to drink it. The lineup on Sunday looked great with Drowned in Sound curating the indoor stage and picking bands like Warpaint, Everything Everything and Blood Red Shoes. We started the day over at the Vintage Fair, which was a lovely addition to the festival. Bargains galore! Then we headed over to the main stage to see Leicestershire’s own Young Knives perform a crowd pleasing set. Naming their album after the Silver Arcade surely has to get them some bonus points! With a lineup including Dutch Uncles, Dry The River, The Antlers and Warpaint we were rushing all over the site, stopping only briefly to get falafel (there’s always time for falafel). As we were on our way back to the Indoor Stage we were struck by something on the main stage. That something being The Cuban Brothers. The perfect Sunday afternoon entertainment (well maybe not perfect for families, but for cider drink twenty-somethings it was perfect), they got the main stage crowd into a frenzy and was the perfect warm-up for recently chart-topping Example. With the uber-commercial headliners of Example and Mcfly outside many people had wondered what would become of the festival, and whilst there was undeniably a far higher percentage of teenage girls in the audience they all stayed glued to the barrier at the front of the stage so the festival continued just fine. With Example tearing through his radio friendly hits to the crowds delight there was only one thing left to decide… Blood Red Shoes or Mcfly? Or put another way, head or heart? We couldn’t decide. We split up. I hear Blood Red Shoes were fantastic, but clearly I opted for Mcfly. With a set mixing old and new tracks, hit after hit (yes I said “hit”, come on, we all know All About You), they’re clearly accomplished performers. Maybe they are a boy band but I was undeniably entertained as was the rest of the crowd. They’re never going to be on the cover of NME, but is that really a bad thing?

So the crowds dispersed, The Orange Tree bar closed and the gates shut on another Summer Sundae. For festival newbies who don’t want to camp or be stranded in a field, and for festival goers wanting a laid back atmosphere, great food and drink, friendly banter and an excitingly eclectic line-up, this really is as far as you need to look. Not many cities have a festival taking place in the middle of it, it’s something to be proud of. Here’s to 2012.

previous article
Leicester Gets Exclusive
next article
Friends With Benefits