I bet Stewart Lee has a thing or 2 to say about the Coronavirus pandemic. Now you’ll be able to hear it from the man himself as he sits down and chats to Leicester Comedy Festival’s Geoff Rowe in new additions to the Happy Hour Q&As.

The producers of Leicester Comedy Festival and The UK Kids’ Comedy Festival have announced more comedians who are providing support for the events due to take place in February 2021. The latest comedians to take part are Shappi Khorsandi, Stewart Lee and Iain Stirling.  They follow Paul Sinha, Lucy Beaumont, Al Murray and more, with the Happy Hour Q&A interviews available each Thursday. All ticket money will go towards supporting the festivals.

Stewart Lee is cited as the 41st best standup comedian ever, and has been gigging up and down the UK since he started performing comedy in the late 1980s.  He is an acclaimed writer, including reviews for The Sunday Times as well as a series of books, and has had his own series of TV show ‘Comedy Vehicle’.  As well as being a comedian in huge demand, Shappi Khorsandi is also an acclaimed writer and broadcaster and has been seen on Mock The Week, 8 Out Of 10 Cats, Have I Got News For You, QI and heard on BBC Radio 4’s Just a Minute.  Iain Stirling is perhaps best known as being the “voice” of ITV’s Love Island but his comedy career goes back some years and includes appearances on BBC Radio 4, Taskmaster, The Russell Howard Hour, Celebrity Juice as well as live shows across the UK, including at Leicester Comedy Festival. 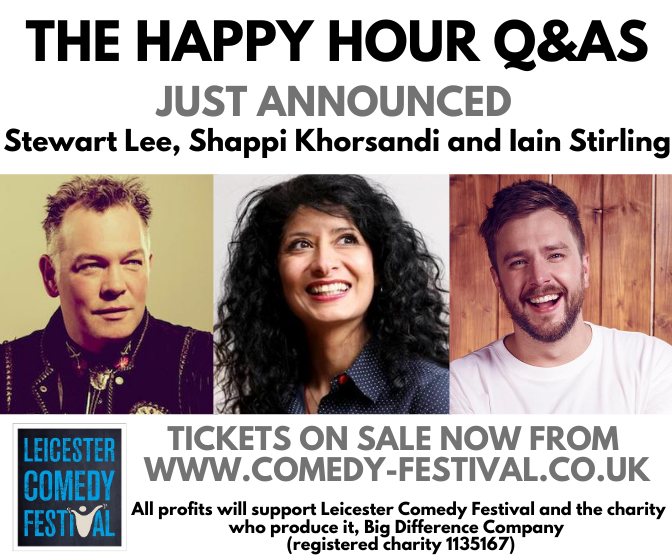 Leicester Comedy Festival Founding Director, Geoff Rowe, said: “to continue to receive support from so many amazing comedians is fantastic.  They give up their time to chat about their careers and we raise money from people buying tickets to watch them online.  Tickets cost just £5, and we are really grateful to everyone who is tuning in to watch these exclusive interviews.  All the money raised from The Happy Hour Q&As will help us continue the work we do, supporting British comedy and communities who take part in our projects.”

To buy tickets to the Q&A events visit the Comedy Festival website. Tickets start from just £5.