The 2020/21 season marked the 20th anniversary of Leicester Tigers’ 34-30 victory over Stade Français at the Parc des Princes in Paris to lift the Heineken Cup as European champions. Now fans can look forward to players past and present coming together at a special event to celebrate 20 years since the club’s first European Cup Final victory.

Following the celebrations marking 125 years at Welford Road in 2017, Tigers are hosting a special evening on Wednesday 29 September in the Premiership Suite of Mattioli Woods Welford Road to give supporters the chance to join some European rugby legends.

Back in 2000/01, the route to the final featured pool-stage games against Pau, Glasgow Calendonians and Pontypridd before a convincing 41-10 home win over Swansea in the quarter-finals and victory over Gloucester in the semi-final.

Leon Lloyd played a starring role in the final against a Stade Français team which included France international Christophe Dominici who has sadly passed away aged just 48 – as his second try of the game in the 78th minute put Tigers in a position to win the game, with Tim Stimpson adding a touchline conversion to provide the extra breathing space on the scoreboard. 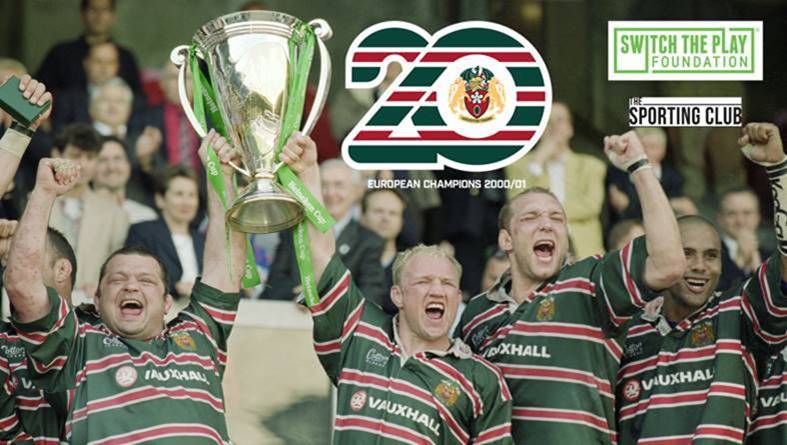 The 2021 celebration event is hosted in partnership with Switch the Play Foundation, a charity co-founded by Lloyd and the UK’s only charity dedicated to supporting all sportspeople to successfully transition into life outside of sport.

Guests will be treated to a three-course meal and refreshments with tables of up to 10 available. Players from the 2000/01 squad and current Tigers will take part in Q&A sessions on stage and look back at footage from the successful European campaign.

Tickets for the evening are priced at £120 + VAT and tables of 10 start from £1200 + VAT. Supporters can also choose to secure their individual places or tables with a 20% deposit and the pay the rest at a later date.

Organised in partnership with The Sporting Club, if this event be postponed or cancelled for any Covid-19 restrictions, guests will have the option to have their places credited across to the new date or can be refunded.

Places are available to book online via The Sporting Club online. You can also secure your individual places or tables with a 20% deposit and then pay the rest at a later date, please contact [email protected]