Looking for something to do with the little ones? Illustrator Nick Butterworth will be visiting the National Space Centre on Friday 28 November with his creation Q Pootle 5, a friendly little alien from the hit CBeebies series of the same name. 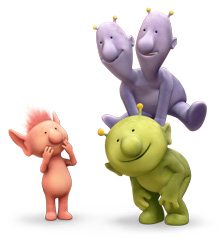 They will be taking part in the centre’s Space Days programme, which will offer young visitors the chance to meet Nick and Q Pootle 5 in person and watch some of the best episodes, including the brand new Christmas special. Visitors will also have the opportunity to take part in a number of exciting and engaging activities including: ‘Groobie’ junk modelling, Q Pootle 5 colour in sessions, the Under 5 Alien Trail and the Costume Trail. In addition to this Nick will be presenting a live show all about the adventures of Q Pootle 5 and how the books and show were created.

We caught up with Nick to chat about the creation of Q Pootle 5 and he admitted he’d actually set out to draw a Giraffe. “I drew a pair of horns too wide apart and what appeared took over. This friendly alien popped out almost ready made and he deserved a story. So I sketched a spaceship which defined his world and I wanted it to be very homemade, not hi tech. I guess it demonstrates the way that children can use their imagination to take things around the house and transform them into something wonderful, like a box or a hairdryer.”

Nick commented on the Space Days programme, “I’ll be talking to groups of children about where my ideas came from, drawing demonstrations, talking about aliens and also inviting children to join in the drawing too. There’ll be a chance for children to do junk modelling and come up with their own ideas and, of course, there’ll be a special Screening of the Christmas episode on planetarium screen. It’s going to be a hugely fun filled day with costume characters, an alien trail and just lots of different activities and screenings!”

Nick’s other books include Percy The Park Keeper series, Q Pootle 5, Tiger, Albert Le Blanc and The Whisperer. He has sold over 15 million copies around the world in more than 30 foreign languages and won several prestigious awards, including The Nestle Gold Award for The Whisperer. His Percy the Park Keeper series has been made into a series of animated films for television.