All the way from Detroit, influential hip hop act Slum Village will play a set at The Music Café, Leicester, on Friday 7 August 2015. This will be the act’s only UK date outside of London so don’t miss out on the dynamic duo who will be supported by DJ Yess with Da Jazz, Wavey & AK Dope with DJ sets by Simon Schoolboy Phillips and Jon 1st (world online DMC champion).

Slum Village was formed by three members; rappers Baatin (deceased 31 July 2009) and T3, plus rapper and producer J Dilla (deceased 10 February 2006). J Dilla left the group in 2002 with Elzhi joining in his absence.

At present, the evolution of Slum Village continues with a reinvigorated energy, with founding member T3 holding down the legacy alongside Grammy nominated producer Young RJ.

Tickets are priced at £15 in advance. More on the door. Available from Rockaboom & 2Funky Tickets. 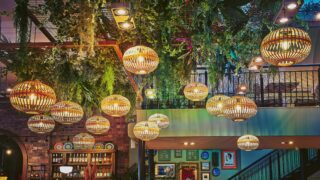 Sonrisa to open with 50% off dining offer