From Alfie to Archie, Shane Richie is set to star as Archie Rice in a brand-new production of John Osborne’s The Entertainer, which will begin its UK tour at Curve this summer.

The Entertainer was chosen as one of the greatest plays of the 20th century by Michael Billington and the new productions, directed by Sean O’Connor, will open at Curve on 27 August 2019 and then tour the UK until November. For the first time since its premiere in 1957, this classic play will be given a vibrant new setting.

The Story
1982: Archie Rice is a washed-up entertainer playing a summer season. As his soldier son sails with the Task Force to liberate the Falklands, his daughter Jean returns from campaigning against the war, and Archie’s professional and personal lives collide with devastating consequences.

Of course we all know Shane Richie from years of various tv appearances. His forty year career has been split between theatre, film & TV; with him being a regular fixture on prime time television hosting such shows as Lucky Numbers (ITV), The Shane Richie Experience (ITV), Win, Lose or Draw (ITV), Don’t Forget the Lyrics! (SKY1), Reflex (BBC) and Win Your Wish List (BBC) to name but a few, as well as major theatre productions such as Grease in the West End. Now we perhaps all know him best for playing lovable Alfie Moon in Eastenders, the role which went on to earn Shane several industry awards and many accolades including Best Actor at the Rose d’Or Television Festival. 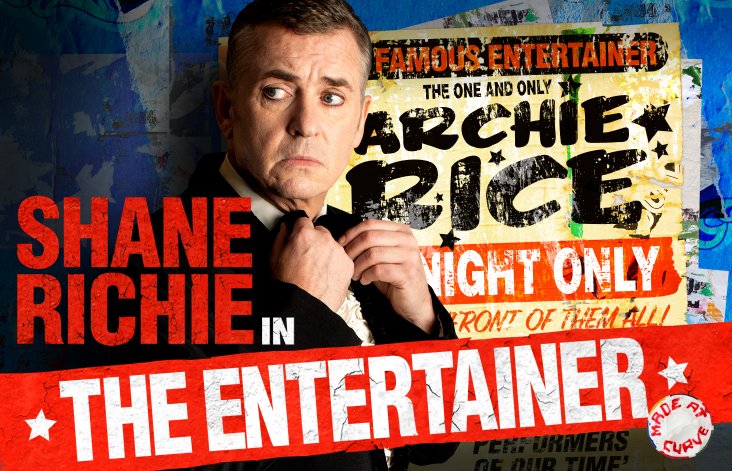 Curve’s Chief Executive Chris Stafford and Artistic Director Nikolai Foster said: “Osborne’s masterpiece was first presented in 1957 and alongside Archie Rice’s failing career, invited the audience to consider its own culture and what it meant to be English at a time of huge shifts within British society. Times have clearly changed, but as our country faces one of the most tumultuous periods since the end of the Second World War, the play once again captures the zeitgeist and is tantalisingly ripe for revival.

“It’s a thrilling play – epic and filled with humanity – and provides Shane Richie with a role he was born to play; we know it will be an hilarious and heartbreaking performance. We are also thrilled to welcome director Sean O’Connor to Curve, whose compelling vision for the play will reveal it afresh to an entirely new generation.”

Shane Richie added, “Following in the black patent shoes of Olivier, Gambon, Lindsay & Branagh, it’s an incredible honour to be asked to play one of literatures greatest fictional characters, Archie Rice. In the words of the great man himself “you’re a long time dead, let’s just whoop it up!“

The Entertainer is a co-production between Curve, Anthology Theatre, and Simon Friend Entertainment. Further casting and creative team will be announced soon.

Tickets go on general sale on Monday 25 February via www.curveonline.co.uk.