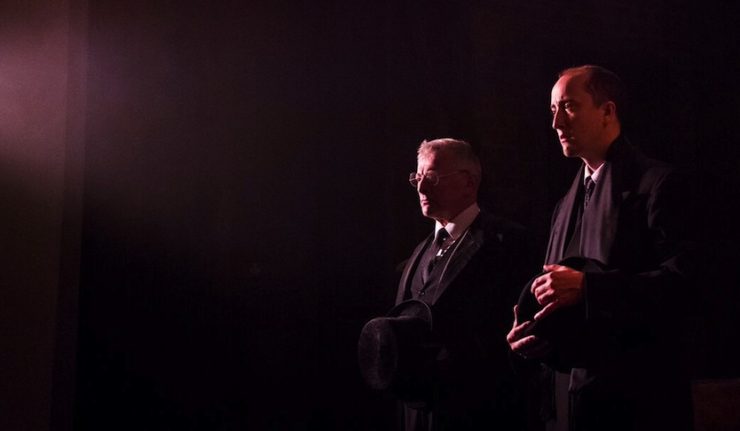 The Woman in Black – Curve from 30 January – 4 February

Susan Hill’s The Woman in Black is a story that’s been told for over 27 years in the West End and is making a short trip up to Curve this week.

The premise of the play is a lawyer who is obsessed with a curse that he believes has been cast over him and his family and the ghost of a woman in black that seeks the help of a sceptical young actor to help him tell his story to his family with the hope that it will rid him of the fear he feels many years on. The play begins innocently at the start of the tale but quickly escalates as the memories go on into something but darker.

The play is minimal with two actors and very few props, but their ability to capture your imagination was exceptional. The chemistry between the actors was brilliant and the need to entertain the audience was evidently high on their agenda throughout. The set design was simple and complimented by the lights and sound which further captivated the audience.

If you aren’t able to allow yourself to be fully immersed without the use of many props and sets, this might not be the play for you. However, the play is so iconic and I would encourage anyone, especially those with teenagers, to go and experience it. If you’ve seen the film production, the play is much better, much more engaging and much more emotional and even though you think you might know the story, you’ll still be leaving with a chill down your spine.

The Woman in Black is on at Curve until Saturday 4 February. Limited tickets are on sale from Curve Box Office.

Performance in the Pub