Review: The Play That Goes Wrong 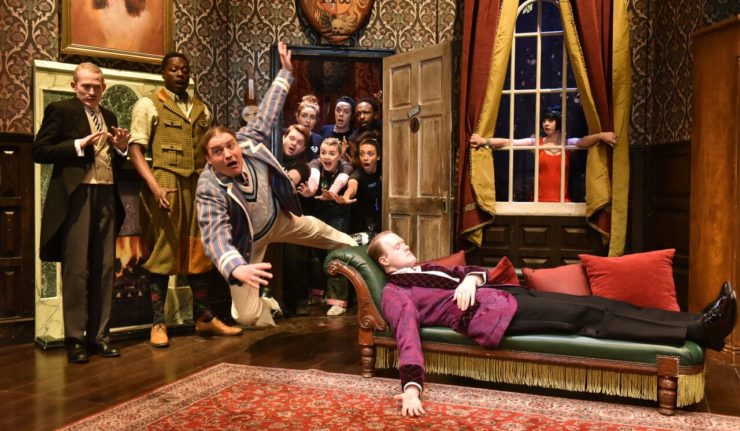 The Play That Goes Wrong is on at the Curve until Saturday 8th September. The show won the 2015 Olivier Award for Best New Comedy, and it’s easy to see why.

Whatever can go wrong, will go wrong

The Mischief Theatre Company’s production is a masterpiece of slapstick comedy. The Cornley Polytechnic Drama Society proudly present their staging of a 1920s murder mystery. However, the gods of theatre are not on their side. Sets collapse, overzealous understudies try to take over and props mysteriously disappear.

The hilarious script is beautifully written. The cast have taken this witty dialogue and blended it impeccably with laser sharp comedic timing. Honed to perfection, the show has been on the road around the UK since January. Practice has made perfect. The unrelenting physical comedy creates a fast-paced play with belly laughs galore. It is the first time I have seen an entire audience in such stitches.

A lot of the physical humour comes across as deeply Pythonesque. You only have to close half an eye to imagine the Upper Class Twit of the Year joining the on-stage fray. Parallels with John Cleese’s Basil Fawlty are inescapable.

Kudos must be given to the set designer Nigel Hook, who has clearly mastered his art. The intricacies of the set and the sheer volume of visual jokes it creates makes the staging feel like an extra cast member. In The Play That Goes Wrong, the fourth wall is not just broken. It is set on fire, stamped on and accidentally kicked behind the chaise longue.

The thing that makes this play so memorable is the jibing but ultimately tender treatment of amateur dramatics. The visible terror of amateur actors when something goes wrong is always funny. And behind that hilarity there is an obvious affection for the subject.

The show must go on at all costs!
And why not? The consequences are truly hysterical.

The Play That Goes Wrong couldn’t have got it more right for me. The synergy of the cast in delivering such technically brilliant comedy is a joy to watch. It will make you laugh and groan in equal measure. Simple but seemingly endless slapstick punchlines have a broad appeal. The interweaving of accidental disasters with the script of a murder mystery is simply masterful.

It felt like the Leicester audience received this play in the best possible way. Not quite a full standing ovation in not quite every section. I can’t imagine any better way to end a play that goes wrong so very beautifully.

The Play That Goes Wrong runs at Curve until Saturday 8 September. Last remaining tickets are on sale via the Curve website.