Review: The Ides of March 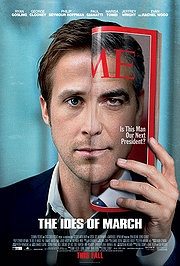 Review: The Ides of March

Take one Hollywood heartthrob (George Clooney), mix that with the most up and coming actor in the business right now (Ryan Gosling), add in a very well cast female lead (Evan Rachel Wood) and throw in two of Hollywood’s most under rated actors (Phillip Seymour Hoffman and Paul Giamatti).  What you get is a compelling political thriller with many outstanding performances. Quite a few people have commented that this could be the passing of the torch from one heartthrob to another. Looking at it, I would have to say good old George has quite a few years left in him.

The film, itself directed by Clooney, is a look at the dirty side of politics, and is a slick compelling piece of work.  Gosling is again the stand out performer of this movie, with another mesmerising performance as Stephen Meyers.  Meyers who works for Mike Morris (Clooney), a governor running to be the Democratic Presidential.  Meyers with his idealistic views and believing in everything Morris says.  Morris at the same time, the perfect person to be behind these views. What can go wrong here?  Well this is Hollywood and this is politics.

Ryan Gosling stars as Steven Meyers, a top aide to Governor Mike Morris (George Clooney), who is running for president; currently at stake is the battleground state of Ohio. If Morris can gain Ohio’s delegates, he’s pretty much assured to get the Democratic nomination, and in the film it’s noted that the Republicans have a weak field themselves (at best). All of this means, of course, that as Ohio goes, so goes the Presidency, so there’s plenty riding on this one primary.

Even though Meyers is not a Mr Perfect, a self-righteous do-gooder, he’s savvy; he knows which buttons to push. He learns, though, that his chief obstacle to success is in recognizing whom is trustworthy, and just because one is friends with another doesn’t mean that either owes the other much when it comes to the game of politics. For example, simply feeding the press (in the person of Marisa Tomei) the occasional tidbit doesn’t mean that the media will be an extended PR arm for Morris.

Its around this point that Meyers makes the bad decission of meeting up with with his rivals and then has to act against the results of his actions, and decide what is right.

Without giving away any of the story, what follows is a quick trial into the crossing and double crossing that take place in the world of politics, with great performances by both Hoffman and Giamatti.

Clooney, with only his 4th film in as a director, it looks like the day those looks do go (God help us men and hurry up), he is going to be a big hit in the direction world, catching the mood perfectly throughout the whole movie.

I would certainly say that whilst this film may not appeal to everyone’s taste buds, it’s a film you have to try.