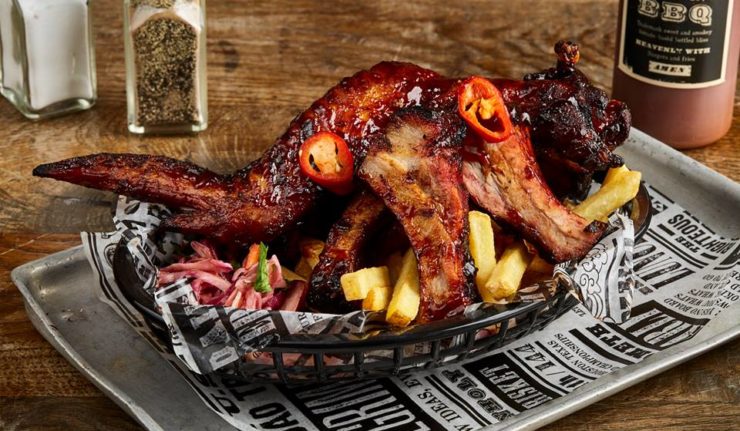 The news that Red’s True BBQ were taking over the kitchen at BrewDog came as big news to the Leicester food scene. Red’s have been a huge hit with their restaurants in the north of the country in Leeds and Manchester, among others, with Leicester their first kitchen takeover venture. So is the fuss all justified? Or is it simply a replacement for the now closed Grillstock in St Martin’s Square? Possibly, but a much better alternative in our opinion.

The menu at BrewDog is a cut down version of their main restaurant menu, but still provides a great selection for lunch or dinner. Of course, with it being BrewDog the menu also comes with suggested beer pairings for each dish, which could certainly turn the meal into an even more exciting affair!

The other good thing about it being housed within BrewDog? Grab yourself one of the booths and you even get your own private PlayStation or Xbox with a massive pile of games to choose from at the table. They’ve got games suitable for kids too and the little ones are allowed in until 8pm.

Back to the food! The main premise, obviously, is BBQ. From burgers to brisket, ribs to pulled pork, or all of it together on a big Pit Tray. You can eat from the main menu at both lunch and dinner, however they do also offer a cheaper lunchtime option with a choice of 4 mains priced at £7.50.

For vegetarians there’s jackfruit, something that somehow had managed to escape me until now! We opted for the Jackfruit Popcorn to start with, which comes with a Louisiana Sauce dip. A good size portion of nuggets in a crisp coating, which for my first experience certainly didn’t disappoint. I’m not ready to jack the meat in for it yet, but it’s a great vegetarian starter option, alongside their Mac n Cheese balls (which come as a massive portion with BrewDog Punk IPA dip), so non-meat eaters need not be put off by the BBQ tag.

But onto the main event. Having read about the Pit Burger online there was only one way to go with the main course, so we sat back and waited in anticipation for both the burger and Pork & Slaw tray.

The Pit Burger is built with a beef patty, Unholy BBQ sauce, smoked brisket, pulled pork, smoked bacon, burger cheese, tomato, lettuce, onion, pickled gherkins and Dirty Sauce. On top of that there’s a giant onion ring on top. If that isn’t enough, you can double up on your burger for another £2. The star of the burger was the pulled pork and the brisket, both of which were so well flavoured and falling apart to eat. The beef patty itself isn’t going to set the world on fire, and nowadays the burger competition is tough, but to be honest, if the burger came without the actual patty it would still be a brilliant dish with the brisket, pork and bacon piled with the cheese and sauce together.

And what of the Pork & Slaw. Well, as we said, the pulled pork was one of the standout items on the Pit Burger and with it cooked low & slow, with a tangy & sweet sauce, it was perfectly complemented by the crackling and apple sauce that accompanies it. The only slight complaint, would be that if you’re really darn hungry when you go then the Pork & Slaw is one of the lighter mains on the menu. That means you can save room for dessert though… (Which is hot chocolate brownie and ice cream, by the way!)

On the subject of the pork too, they also do a side of Hog Fries, which is their skin-on-fries loaded with chipotle sour cream and pulled pork and I’ve been dreaming about trying them ever since we went. If anyone has them please do tag us in your Instagram snap so we can drool over them before our next visit!

What’s it going to cost you? Well, the menu isn’t cheap as such, there are cheaper places you can eat in the city, but it depends on what you order and certainly for a lot of the menu it seems worth it. The Pork & Slaw main is £9.95, which for a main course anywhere is reasonable, whilst the Pit Burger is £14.95. The prices go up to £18.95 for the Pit Tray, but promoted as the BBQ Tray of Champions, you’re going to get a lot of meat for your money.

If you’re looking to sample it before fully committing then head down for the lunchtime deal when you can enjoy a Pulled Pork Sandwich & fries, a BBQ Basket, Bacon Cheeseburger or Jackfruit & Slaw for just £7.50 each.

Would we go back? I don’t doubt the Pit Burger will feature again in my dining plans, and those Hog Fries and a lunchtime BBQ Basket are right on our return visit radar.

Extra shout out to Grace from the BrewDog Leicester team, who served us and was super lovely!

If you want a booth with PlayStation or Xbox you might be lucky enough to grab one, but to make sure you can also pre-book in advance. For full details on drinks, food, bookings and more head over to the BrewDog Leicester website.

We were invited to review Red’s True BBQ at BrewDog Leicester and received our meal free of charge. There was no obligation to give a positive review and all opinions are our own.