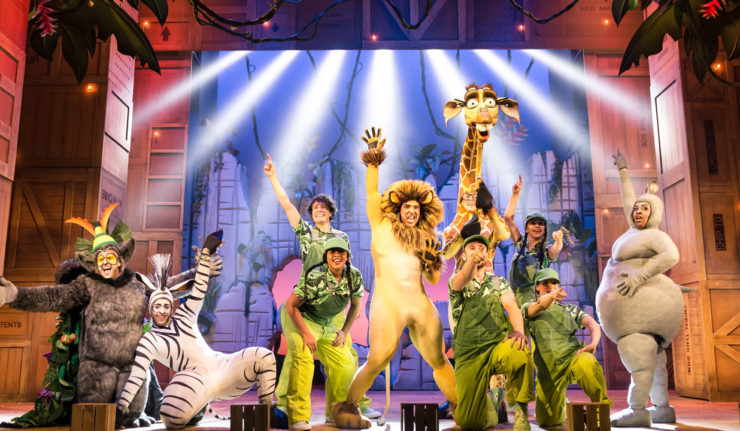 Never before have I been given a pre-show warning about turning off my mobile phone by a chimp threatening me that if I don’t he’ll “throw poo at me”. Well last night at the Newly refurbished Haymarket Theatre, that is exactly how my night began when Mason, the well cultured Chimpanzee, appeared from a shipping container to kick off proceedings. And as any parent knows a poo joke is always a good way to get the kids on side and engaged in any scenario.

The 2005 Dreamworks animation starring a bevy of characters comes to life in this colourful musical, that sticks to the formula of the much loved film but with a few added musical numbers, some more memorable than others. “Raspberry Clouds” a very tongue-in-cheek play on The Beatle’s Strawberry Fields was wonderfully entertaining and raised a wry smile as it explored the results of one of the lead characters being shot with a tranquilliser.

For those not up to speed with the plot of Madagascar, the story follows four New York City Zoo animals, Alex lion and self-proclaimed “King of New York City”. Marty the Zebra who dreams of freedom beyond the zoo walls, Gloria the feisty and sassy hippo and Melman, the hypochondriac giraffe and their adventures from the streets of the big apple to the beautiful beaches of the titular island of Madagascar.

Recent X-Factor winner Matt Terry (no me neither) gives a solid performance in his professional stage debut showing his vocal range with a number of early musical numbers including a duet ‘Bestest Friend’ with Antoine Murray-Straughan’s Marty, a song that makes several returns throughout the show.

But it’s the second half of the show and the introduction of Jo Parsons’ King Julien and his party-loving Lemurs that it really gets going. Parsons, who is also the resident director steals the show as the madcap monarch, from his performance of ‘Move it, Move it‘ to his laugh a minute interaction with his furry puppet friends that really gets the audience to their feet.

Tom Rogers’s design is colourful, bright and matches perfectly with Fabian Aloise’s marvellous choreography and putting this all together results in enthralling show for kids of all ages.

‘Smile and wave boys’ may be the catchy line delivered by the leader of the penguins, Skipper, but it also represents what me and the majority of the fathers in the crowd ended up doing last night, whether we liked it or not.