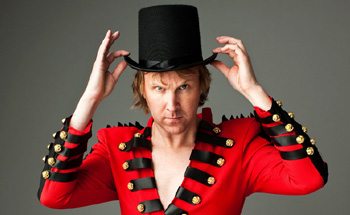 You’re standing in front of hundreds of people, trying to spin plates while a manic Irishman with a special eye repeatedly pokes you in the testicles with a pair of drumsticks. Amazingly enough, this is not a dream brought on by a late night cheese feast (I think even Sigmund Freud himself might struggle to interpret a dream like that). This is what happens when you go to see Jason Byrne at De Montfort Hall and sit in the front row.

The testicle drumming is just one example of the extensive audience participation encouraged by Jason in his role as ringmaster of the Cirque du Byrne. From getting a latecomer to accompany him in an Irish jig to leading a pair of “volunteers” in a step aerobic/skipping class, Jason likes to share the limelight. It’s a tactic that goes down well with the enthusiastic crowd – with no shortage of willing butts for his jokes. There’s a constant feeling of anarchy, that even Jason doesn’t really know how the show is going to pan out. There are a few more conventional anecdotes – mostly on his childhood, the origin of that special eye and the realities of married life, but it is the unscripted interactions with members of the audience that go down best.  It’s a high energy and presumably exhausting show for Jason – one that frequently sees him collapse to the floor in exasperation at the apparent idiocy of his victims.

Cirque du Byrne is great entertainment, and a show well worth seeing – just be careful where you choose to sit!