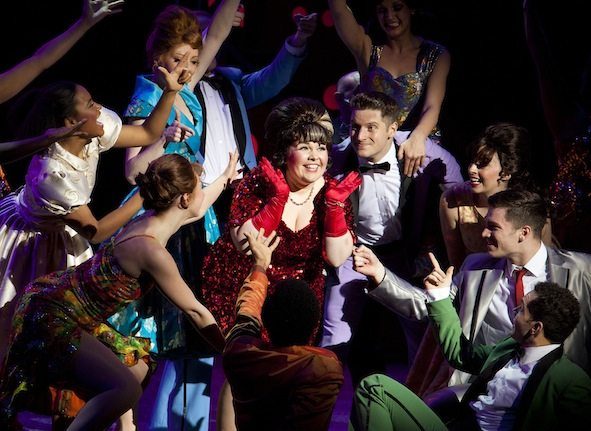 I’d heard a bit of a buzz going around Leicester about the opening of Hairspray. Fans of the original, eager to see Curve’s adaptation and musical theatre fans just keen to see the next top notch production in the city. Myself, I knew nothing about Hairspray. Nothing at all, other than there was once a film, it had been in the West End and, I assumed, had something to do with big hair. So I entered the theatre with a very open mind.

The story follows Tracy Turnblad in her quest to be a dancer on the Corny Collins show and the love story between her and teen hottie Link Larkin. “Oh another boring love story” I can already hear you groan. Not at all. Firstly, Link’s current girlfriend is so awful you’ll be willing him to get with Tracy, secondly, the love story comes only second in line to the important issues of racial integration that the show raises, and thirdly Link is played by David Witts, otherwise known as Eastenders’  Joey Branning, and there’s no chance of boring with a face like that.

One thing’s for certain, if you know nothing of the story you won’t find it difficult to get involved with the show and you’ll soon be up dancing with everyone else. With tune after tune of catchy, punchy sing-alongs you’ll be transported back to the 60s and wish you had the chance to dance on the Corny Collins show too!

Rebecca Craven (Waterloo Road) is an instant hit as Tracy Turnblad and has the audience in the palm of her hand as she dances around the stage. Her natural charisma shines through as she guides you through the story. There’s no doubting that a few of the girls in the audience are there to see David Witts as Link Larkin and he does a solid job in his stage role. Other notable cast mentions must go to Damian Williams playing the hilarious Edna Turnblad and also Tyrone Huntley who shone as Tracy’s detention mate, Seaweed.

All in all this is a guaranteed fun night out and a show not to be missed. I may have even uttered the words “That’s the best show I’ve seen in years” as I left the auditorium. Book now!

previous article
Exclusive 20% off at BangLads
next article
Review: Pre-theatre dining at Curveside