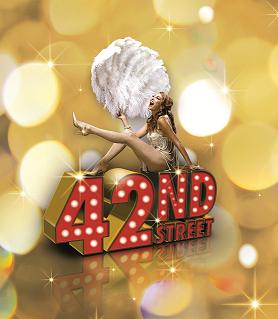 I tend to approach a musical with the same methodology I would a zombie apocalypse. Get through it without being bitten. So when asked to provide a few words for Curve’s latest melodious production, 42nd Street, I stocked up on tinned goods and with trepidation, I made my way to the theatre.

42nd Street conveys the story of plucky young Peggy Sawyer and her dream of landing a part in hotshot director, Julian Marsh’s, latest stage show, Pretty Lady.  A tragic ankle shattering ‘accident’ befalls the show’s lead (in honesty she did go down a little easy, akin to a certain penalty seeking Portuguese winger), and, quicker than you can say “montage“ our pint sized Peggy goes from understudy chorine to Broadway superstar. This is all set against the backdrop of 1930s Depression era America.

The show is your classic Broadway musical; a threadbare story linked together by stunning dance numbers and powerful vocals. In delivering this, the performance certainly doesn’t disappoint. Many simple thoughts and conversations quickly evolve into a song and party (if this happened to me I’d never make it to the supermarket). Well known ditties, I was assured I should know, such as Lullaby on Broadway, Shuffle Off to Buffalo and We’re in the Money are brilliantly choreographed by the wonderful and varied cast. All of which get involved on vocal duties. To my bitter, anti-musical annoyance, 42nd Street really possesses a genuine feel good factor and is a model antidote to staying in chowing down on cold turkey leftovers with Grandma and co during the holiday period.

By the end of the final number I found myself in possession of a strange feeling. I was clapping along, even standing up along with the rest of the audience, cheering as the final number closed and the curtain fell down. I may have been bitten… so much for survival.

42nd Street is at Curve until 21st January.

Tags:ArtsTheatre
previous article
ABC is Back For Christmas
next article
Don’t Panic!