Perrier Best Newcomer Nominated, Multi-Award Winning comedian Tim Fitzhigham is coming to Leicester on Friday 14 October with his show to commemorate the 400th anniversary of the death of Shakespeare. 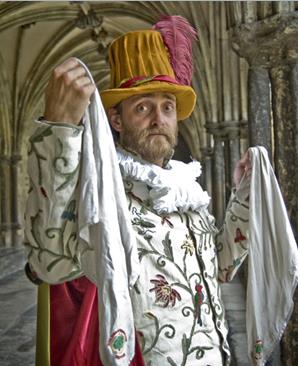 Will Kempe the comedian and William Shakespeare the writer fell out over Kempe’s ideas for a comedy part in Hamlet. To show Shakespeare the true nature of comedy Kempe walked out of his office in the Globe and Morris danced from London to Norwich in nine days! Some 400 years later multi-award winning comedian Tim Fitzhigham read about this argument in the footnote of a long forgotten book and decided to bring the story back to the stage.

To commemorate the 400th anniversary of the death of Shakespeare join Tim for wild Morris dancing, near death, arrest and injury as he takes on the challenge of the greatest stand up the world ever saw – Will Kempe. Bound up with this story is the discovery that Shakespeare and Tim may have a lot more in common as Tim stumbles on some forgotten paperwork and the secret of a catholic saint.

Tim brings the show to Leicester’s Y Theatre on Friday 14 October and tickets are priced at £14/£12 concessions. Tickets are available to purchase from the Y Theatre website.

WIN
We’ve got a pair of tickets to Tim’s show to give away to one lucky Cool As reader. Just answer the question below before the closing date of Sunday 2 October and the winner will be contacted shortly after the closing date.

The show commemorates how many years since Shakespeare’s death?