Have you started planning what you’ll be going to see at Leicester Comedy Festival yet? How about… a funeral? Yep, An Improvised Funeral will be taking place at Leicester Cathedral and here’s what you can expect.

Imagine organising a funeral where everything has been booked, the flowers, the food, the priest, but nobody is sure who is in the coffin… so you have to just make it all up. From improvised poetry readings, to hymns, eulogies and stories from their life all completely made up. That is the essence of the show. Taking audience suggestions for the name of the deceased, their occupation and an object they are buried with we present their life story. Complete with flowers, urn, and their very own coffin.

The show’s creator, Harry Househam, came up with the show idea whilst attending the funeral of his great aunt and his grandmother. “I found it interesting to recognise the same hesitance to sit on the front row at the funeral as with a comedy night, nobody wants to be the focus of attention or in the spotlight. It’s also amazing how much tension around death makes people quite giggly, from stifled laughter when somebody almost trips over or imagining all the things that could go wrong. It just seemed like funerals and death were a subject that we all take far too seriously, and there is joy to be found in peoples lives.” 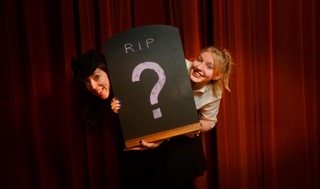 “Having to improvise the funeral and make someone up also takes the edge off as well, it’s hard to be offended when our dead person isn’t real! Death and dying are things we don’t often talk about, one of the greatest taboos, and as such a really great thing for comedy to bring from the dark places of our mind to the forefront to shine a light and to have a good old laugh at our fears. We’ll urn your applause or die trying, whilst putting the fun into funeral!”

“A great success: genuinely funny, talented improvisers came together around a thoroughly amusing theme to astound the audience.” The Cherwell

“Bringing mirth to that most solemn of occasions: a funeral.” Daily Info