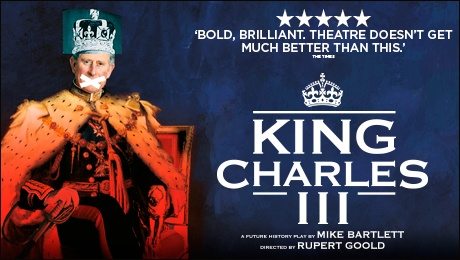 The programming at Curve just gets better and better and we’re especially looking forward to the opening of King Charles III on 26 January. Following a sold-out run at the Almeida Theatre and a critically acclaimed West End season, the multi award-winning new play from Mike Bartlett comes to Leicester.

The Queen is dead. After a lifetime of waiting, Prince Charles ascends the throne with Camilla by his side. As William, Kate and Harry look on, Charles prepares for the future of power that lies before him…but how to rule?

Directed by the Almeida Theatre’s artistic director Rupert Goold, this ‘bracingly provocative and outrageously entertaining new play’ (The Independent) explores the people underneath the crowns, the unwritten rules of our democracy, and the conscience of Britain’s most famous family.

King Charles III runs at Curve from Tuesday 26 to Saturday 30 January 2016 and tickets are available from the Curve website.