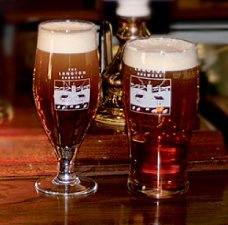 There has long been many a campaign to persuade consumers, where possible, to buy British. To protect British industry and producers. And long may that continue. But local communities are now beginning to focus their loyalty further by looking to support a “Buy Local” movement.

There are few places where this is more evident than in Market Harborough, where local businesses proudly display “Buy Local” slogans, in support of local producers and businesses. In some areas, this might mean to sacrifice quality for community support, but with the quality of producers and businesses for food and drink in Harborough, buying local is to discover some remarkable quality produced on your doorstep. In particular, there is a whole world of outstanding alcoholic drinks to be discovered.

Duncan Murray Wines on Adam and Eve Street is a fine starting point on your Harborough drink education. The shop is packed full of fine wines hand selected for sale, alongside local and international beers and spirits. Owner Duncan Murray is a keen supporter both of local producers and businesses, and acts as supplier for several restaurants in the area. In addition, his shop also serves to encourage an appreciation of good drinks. Each Saturday lunchtime, a number of different bottles of wine are opened on the shop’s tasting barrels, often alongside some carefully selected beers and spirits. He also hosts a number of themed tasting events in a variety of Harborough venues throughout the year to introduce residents to new tastes and flavours.

It is Duncan and his staff’s friendly and approachable attitude and their extensive knowledge and enthusiasm for the products they sell that makes the shop not just one of the finest off licences you will find for miles around, but also makes it a community hub for learning to appreciate your drink. Duncan feels that people’s expectations from what they drink is now higher than it’s ever been. “People have never been more interested in discovering quality, and now expect the best” he states.

“We taste almost everything we sell and will not sell anything that isn’t of the highest quality. In an increasingly competitive market, the standard has been raised even for packaging and labelling, since this is often people’s first impressions of the product.”

With competition this fierce, the stakes have never been higher for local producers. Here is just a selection of some of the local quality available.

Spirits: Harrington producers Warner Edwards have a growing reputation for their crisp aromatic gin. Their venture began having met at agricultural college, and finding gin distilling a more exciting option to regular farming. Their production scale remains small, right down to the metallic coil on each button being individually hand wound.

Their signature Harrington Dry Gin, along with their Sloe Gin and Elderflower Gin have all won double gold in the San Francisco International Wine and Spirits Competition. High quality ingredients is the name of the game, right down to the natural spring in Harrington being used to produce the gin. Other ingredients are taken from each others’ farms.Their latest release of rhubarb gin, made from the same strain of rhubarb as grown for Queen Victoria at Buckingham Palace ought to set taste buds tingling this autumn too.

Even closer to home is Market Harborough producer Two Birds. Remarkably for the range of products produced, this remains a side project for owner Mark Gamble, who by trade is an engineer. The scale of production started out as very small, with the distillery being confined to a home utility room. The business has now outgrown this and has moved to a 3000 sq ft distillery near to the centre of town and are now making up to 15,000 bottles per month.

Two Birds’ style is slightly more strongly juniper based in flavour. They produce a classic London style dry gin, alongside a cocktail gin, more heavily flavoured for cocktail mixing which like Warner Edwards has won double gold in the San Francisco International Wines and Spirits Competition. Whilst gin remains their flagship product, Two Birds have also found success with vodka production. Their classic English Vodka is produced and sold alongside a Raspberry Vodka recipe, and a successful summer seller Passion Fruit recipe. In addition, they have also released a remarkably flavoursome and warming absinthe which is a far cry from the stereotypical thoughts of absinthe as a 2am drink to be given to punish the groom on a stag event.

Beer: Harborough and the surrounding area is also treated to a number of impressive breweries. There is much excitement amongst local beer aficionados at the proposed Beerhouse micropub that will showcase many a beer from the local area and beyond. Watch this space!

Perhaps the best known of the local breweries is The Langton Brewery, buoyed by their recent bronze medal for Best Bitter in the National Beer Festival in London for their Inclined Plane, a pleasant hoppy drink with a refreshing smooth finish. They have an impressive range or real ales readily available locally by the bottle or on cask in pubs such as The Angel Hotel, notably the Hop On with a flavour that measures up to it’s name, and the long lasting flavour of the Bullseye Stout. From the humble beginnings of a joint venture between a pub landlord and a bank manager, the Langton Brewery has developed into a fine brewery of some repute.

Other nearby breweries include micro and craft brewer Latimer Ale from Oakley Hay, who have a fine range of pale ales, bitters and European style beer; and the Wellingborough based Hart Family Brewery with their striking 1833 branded bottles of what they describe as pure beer, using only natural ingredients for the highest quality.

Whilst the finest wines from all corners of the globe can be purchased from Duncan Murray Wines, you may be surprised to learn that the area also has a wine producer. Welland Valley Vineyard is one of several English vineyards that look to prove that quality wine can also be produced in England, and indeed are a popular present for people to take to friends and family abroad to prove that such a thing is possible. Their vineyard is worth a visit, particularly during English Wine Week, usually during the last week in May. Their Steeplechase Sparkling is their most popular drop, providing the ideal accompaniment to a local celebration.

Just down the road in Hallaton is The Bottle Kicking Cider Company, named in tribute to the traditional annual competition between Medbourne and Hallaton. Whilst their production now focuses on cask conditioned cider, their Scrambler, Rambler and Scrummage ciders remain popular in many a local pub.

So there we have it. No matter what your poison is of an evening, it is possible to find a locally produced version from a surprisingly small radius from Market Harborough.

All words by Iain Morton