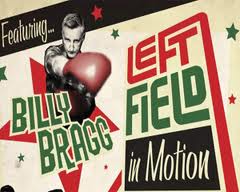 Since taking over the running of the Left Field at Glastonbury Festival in 2010, Billy Bragg has made an effort to showcase young artists who are mixing pop and politics. Now he’s bringing his new Left Field in Motion Tour to Leicester, with a show at O2 Academy on Thursday 24th November. The ticket price is even pegged lower than usual in an attempt to connect a new generation to the power of music with something to say.

Writing in the NME recently, Bragg recognised that the English riots had created a unique moment for young artists to step up and offer their perspective:

“The disturbances of the past weeks have stirred up a shit storm of opinion in the mainstream media, much of it from people who have no real experience of the pressures faced by this generation, the first in a century that are likely to grow up worse off than their parents. Though this situation has been building for some years, the disturbances have created an opportunity for young people to provide an alternative commentary.”

In recognition of what is currently the most political music scene in the UK, MOBO Award winning hip hop artist and founder of The Hip Hop Shakespeare Company Akala will also be joining Bragg for the show. Support also comes from the astounding genre defying hip hop poetry of Sound of Rum.
Bragg says “Music helped me to make connections when I was growing up – between the situation I found myself in and the powerful people who put me there. Artists need to start engaging in this debate again and Akala and Sound of Rum are inspiring examples of those prepared to push against the power.”

Tickets for the gig are on sale now for just £13 and you can get yours HERE.