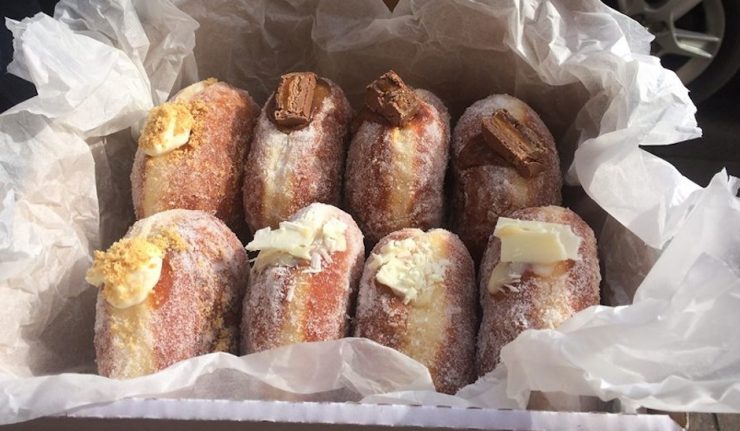 Not that an excuse is ever needed for doughnuts, but this week it’s National Doughnut Week and one upcoming Leicester based baker has been causing quite a stir with her doughnuts recently. Nelly’s Doughnuts is the brainchild of Jodie Coleman, and if you haven’t tried them yet then you’re missing an absolute treat. Krispy Kreme, who?

Having sampled a range of Jodie’s finest filled doughnut creations, including Strawberry Cheesecake, Caramac Cream, Kinder Bueno surprise and Millionaire’s Shortbread (tough job!), we caught up with her to find out a little more about the growing business.

Read on for all the inside doughnut info and more importantly where you can buy them!

When did you start Nelly’s Doughnuts? We officially launched at the end of February this year so we’re still really new!

What was the inspiration behind Nelly’s Doughnuts? I began trying to make some really good home made doughnuts which friends and family then started to order, my brother thought I was onto something so brought me some insurance and a gazebo and gave me a shove!

How many different flavours of doughnuts do you make? Probably about 15 currently. I love experimenting with the fillings though so it’s growing all the time and will change with the seasons.

What’s been your favourite doughnut flavour creation? Being a child of the 80s I was pretty pleased with the Caramac. The strawberry cheesecake filling finally persuaded my husband there are other flavours beside his beloved strawberry jam!!!

Besides your own, which are the best doughnuts you’ve ever tasted? I went to New York  a few years ago and ate some amazing doughnuts there.

What’s the secret to making a good doughnut? Time, our dough is proved for 18 hours which lets the tasty yeasty flavours develop.

How are you celebrating National Doughnut Week? By making lots of doughnuts, experimenting with some new flavours and hopefully we’ll have some exciting news regarding a new colabaration.

What’s your favourite music to listen to whilst baking? I get up at 4am to make doughnuts so mostly bird song!

Where are your favourite cake/dessert places to visit in Leicester? For dessert I like Madisons or Heavenly Desserts on London Road and we’re spoilt for choice with amazing cake shops and bakeries. I love Skylark bakery, or the Tiny Bakery in Clarendon Park or the Cake Club in the city.

What’s your favourite hidden gem in Leicestershire? I love cream teas on the lawn at the Botanic Gardens in the summer or the Garden Barn in Cotesbach. Kings Lock tea room at Aylestone Meadows is lovely to!

What’s next for Nelly’s Doughnuts? Hopefully  you’ll see us popping up at a few other locations in the next few weeks and we’re looking forward to attending some festivals and events in the summer.

Tell us how our readers can get their mitts on your doughnuts? Doughnuts are available from The Cake Club in Leicester on Fridays and Mint & Ginger at The Manor Tur Langton on Fridays and Saturdays.  On the 13th May I’ll be at the LCB Depot as well. You can also order doughnuts directly and have them delivered to you!

Doughnuts cost from just £1.50 and you can keep up to date with upcoming events, flavour creations and how to order through Nelly’s Doughnuts Facebook and Instagram.