Following the 20th anniversary of their number 1 album, 1977, last year, one of our old favourites, Ash, return with a must-see headline show this summer at Leicester’s O2 Academy.

With our school days filled with the likes of Girl From Mars, Oh Yeah, Shining Light, Burn Baby Burn and so many more, so caught up with the band to find out what we can expect from the upcoming tour, how their new material is sounding and just how much they’ve packed into the last 20 years.

What can fans expect from the upcoming tour?

Expect us to come out and blaze through all the hits and more. We’ve been locked up in the studio for a long time and are ready to cause a ruckus!

You’ve been working on new material, how does the new Ash sound?

We’re pretty pleased with how the new album’s sounding, it feels like a natural successor to our last album Kablammo!. We’ve been working on it for over a year at our studio in New York and we’re putting the finishing touches on it now. Most of it is mixed and we’re excited to get people to hear it soon and get out on the road in 2018 to promote it.

When you see a crowd erupt in a frenzy to a song like Burn Baby Burn it’s very hard not to get carried away with them. That kind of adrenaline rush can’t be bought and is why we love doing what we do.

You recently did a run of 1977 shows, playing the album in its entirety, what was the audience reaction like?

The crowd reaction at the Roundhouse was arguably one of the best shows and reactions we’ve had in our entire career. We were blown away. We had it recorded in 3D video so it’s been captured, now we just gotta work out what to do with it!

Do you find that you’ve kept many of the same fans since the beginning?

Of course, and you continue to make new fans throughout your career, some fans you get to know well and maybe don’t see for a few years, and then when you bump into them again it’s great to catch up. We usually hangout in the towns after shows if we can and make the most of it before getting told to get on the bus!

Ween at Terminal 5 in NYC. We’re massive fans and they can play any style / genre and make it work. They’re geniuses and still killin’ it.

Are there any venues or festivals that Ash haven’t played that are still on your to do list?

Electric Picnic in Ireland is one festival that’s eluded us so far. This year will also be our 10th Reading Festival, which we’re told is a record. We’ve played over all the stages but who knows, maybe someday we’ll headline the whole shebang!

What do to next 12 months hold for Ash?

Lots of touring and hopefully the new album will put us back on the radar. We’re also determined to get a second new album released ‘quickly’ after the first one, and not had a long 3 year gap between releases. We wanna ride the momentum of one release into the next and hopefully we can turn on a new generation of ASH fans in the process. 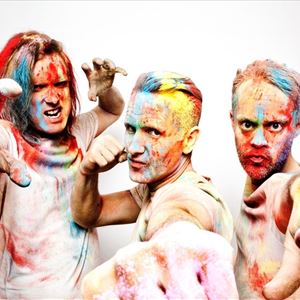