Music has been one of the worst hit sectors of this year’s pandemic, but what effect has it really had for those working locally in the industry?

The struggle for venues has been well documented, but let’s not forget the artists, technical crew, tour managers, promoters and everyone in between. We caught up with Robot Needs Home’s John Helps, a musician, tour manager and music promoter from Leicester, to find out what the impact has been for him and others in the industry, both here in Leicester and further afield.

I’m a musician, tour manager and live music promoter so basically every aspect of what I do for work and pleasure has been completely halted since March. As a musician I’ve had to postpone shows by a full year. As a tour manager working for artists largely based in the US, all my work has been cancelled until at least 2021, possibly much later. As a promoter almost everything I’m involved with has now been postponed multiple times and we’re looking at the second quarter of 2021 for any shows there at the earliest.

What do you think of the government support offered so far in terms of arts rescue packages and the self employed support scheme for those working in the sector?

I’ve been largely looked after so far, but I’m extremely lucky because of how I’ve chosen to set my business up. I feel very negatively about the way many freelancers I work with have come out of this with no support at all, being forced on to inadequate universal credit, and in some cases not even that. I know one sound engineer who doesn’t qualify for any support at all, so has really fallen through the cracks of the system.

Now furlough and SEISS have ended I think we’re going to see a real disaster in the arts world as creative people and the enormous network of freelance professionals who support them are being told to vacate the industry entirely.

From an insider perspective what is the real impact of this on a local level here in Leicester?

Thanks to the ACE Funding announcement, at least some local venues have been given a lifeline, which is positive. Sadly I’m sure we’ll see high profile local arts venues go to the wall in the coming months, but less visible will be the bar staff, freelancers and creative people who just simply won’t be able to work in the industry anymore. That will be hundreds of people.

When do you realistically hope to be able to resume work?

Fingers crossed for March / April 2021. I suspect it will be a lot later than that.

Rishi Sunak backtracked on his statement about people in the music industry re-training, but how much of a shockwave did this send through those working in a similar capacity to yourself?

I mean, he hasn’t shown a way to support much of the industry through the crisis, so he hasn’t *really* backtracked on it – he’s just no longer explicitly saying that the sector is unviable. It IS unviable, because venues can’t operate at profitable capacities and landlords aren’t waiving rents for venues who won’t be able to pay it.

The thing that really gets me is that it takes months if not years to retrain for a different career? How are we supposed to support ourselves through that time when we’ve already run our savings (if we had any) down to nothing in the last six months. Assuming we CAN retrain, we should all emerge with our lovely new qualifications just as a vaccine is available and we can go back to our old jobs. Which is pointless.

The reality is that a lot of people who work in the arts are extremely qualified and already working two or three different jobs to support that career choice that they love, so it’s in many cases a pointless exercise.

How can people support venues and artists during these times?

The big one is to buy music and merchandise from local acts. Now and forever.

Many venues are running crowd funders or selling merchandise or other bits and pieces, so look out for that. Some venues in Leicester have started putting on shows, which I know is a contentious issue in terms of controlling the spread of a second wave, but they’re committed to operating responsibly and the numbers show that these things can be done with a minimal risk – so if you feel comfortable doing so and they’re putting on an act you love, I think you could do worse than support those efforts.

More generally you can donate to charities like Help Musicians UK, who do great things, and check out some of the initiatives being lead by The Music Venues Trust, who have really successfully lobbied the government over the last 6 months and are promoting a number of other campaigns to support grassroots music venues.

The music and arts scene in Leicester rarely receives the credit it should, what are some of your highlights over the years that demonstrate the importance and value of this sector locally?

God, so much. I’m completely biased as I’m involved, but Handmade Festival was a really great event that I hope to see back in the future. Before that Summer Sundae was always incredible. Just generally the work that all the small venues in the city do week in week out from Firebug to The Donkey to The Soundhouse – each serving their own little niche of music fans with consistently high quality acts both locally and beyond.

The best thing about Leicester has always been the willingness of everyone to collaborate and work together on things for the benefit of the city. You see that in Leicester Fringe, Handmade and countless other projects over the years. It’s really lovely.

Who are some artists locally that people should look out for?

Grace Petrie has done so much over the last six months raising money for at risk venues and charities, and she is a really important voice as a musician both locally and nationally.

Adam Weikert has about nine different projects under various pseudonyms, but he continues to be one of the most unusual and consistently interesting musicians in the city.

I’ve been really enjoying a band called Beef D’Reef if you’re in to much heavier and weirder stuff.

Rich List are absolutely brilliant if you like danceable electronica that has more than a whiff of The Pet Shop Boys to it.

People Need Goals has been relentlessly releasing great little electronic EPs through lockdown and you can support through a Patreon subscription.

Courtney Askey is an incredible songwriter who I hear rumours of new material from, which is really exciting.

Where do you see the industry in 12 months from now?

Hopefully back to strength and subtly changed for the better by the whole experience, but I think that’s wishful thinking. I hope just that people can find a way through this honestly. 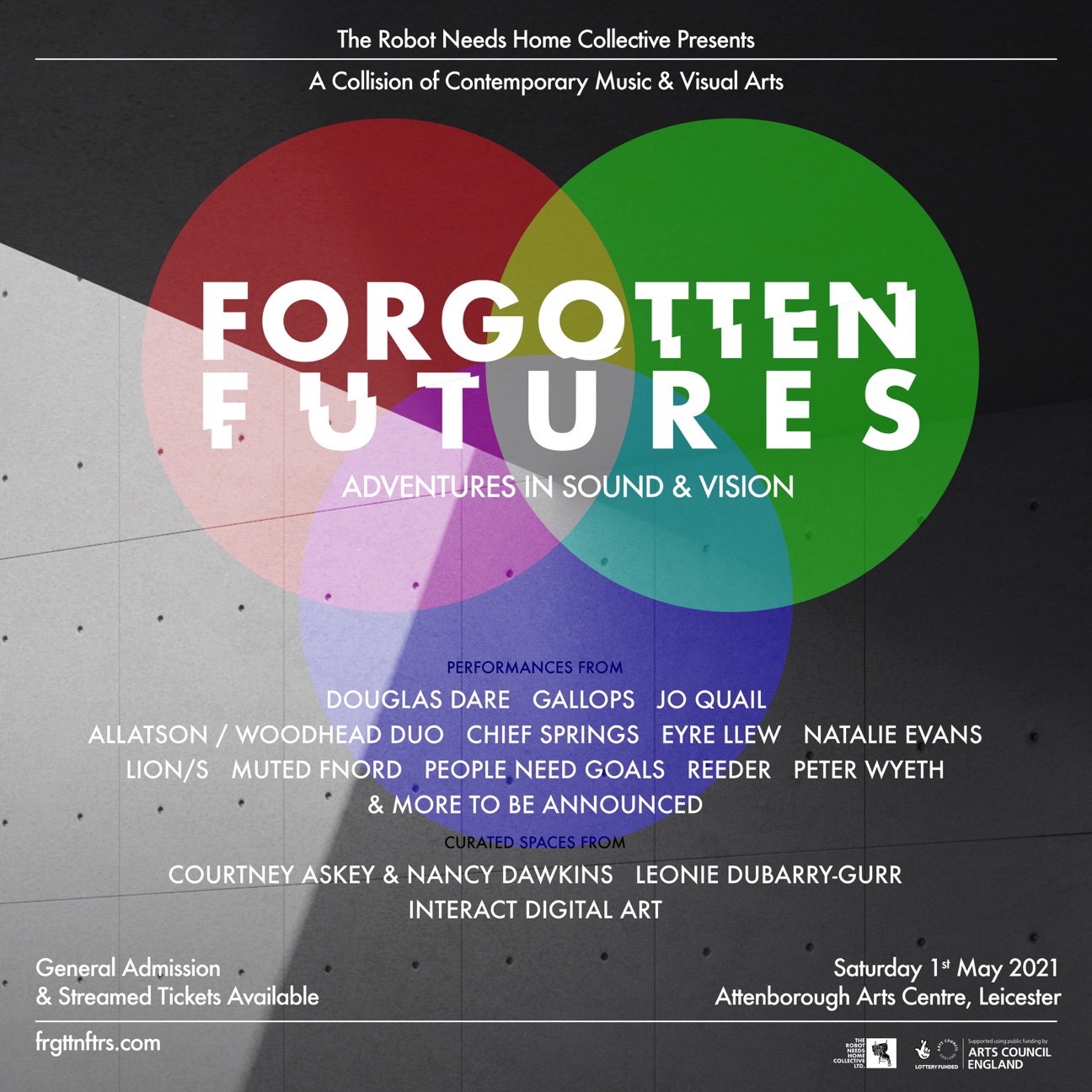 How can people keep up to date on your upcoming news/projects?

Almost everything I do can be found at robotneedshome.com or on The Robot Needs Home Collective social media. The main thing I’m working towards at the moment is Forgotten Futures – an audio-visual music event that I have PROMISED will happen in one form or another on 1st May. Stay tuned to see how I carry through on that promise I guess.

You can find out more about and donate to Help Musicians UK (as mentioned in John’s interview) via www.helpmusicians.org.uk.