Villages sure have their quirks but did you know there’s a new podcast sitcom out that’s based here in Leicestershire? Village is available to download now and we caught up with the man behind it Joe Johnson to find out more.

Tell us a little about Village and how it all began
It probably began 25 years ago or more. I’ve always passed the time ad libbing conversations with my mates where I’d play the role of a disgruntled local farm labourer or someone from Blaby calling up the Leicester City Football Forum with a point to make about the players commitment levels.

Village came to a head when I realised I had the technology and I suppose the confidence to actually bring the characters to life. I made my first podcast, This Rural Life, last year. It was an interview-based format designed to be a bit of an alternative to twee offerings like Countryfile. This got me used to hearing my own voice, which can’t be underestimated in terms of fuelling the ego.

I remember walking through a field one day having recorded an intro with the dictaphone and I just started trying to mimic the gamekeeper at my Dad’s farm. He has a unique rhythm to his speech. I played it back and was a bit annoyed with myself because it sounded too similar to Ian Cockerill, the guy on the Tigers Rugby Show on Radio Leicester. Even though I knew I had my work cut out to create distinguishable characters, it was so much fun to flesh them out, come up with backstories and play with the voices.

Beyond the individual characters in Village there is a central concept that sits behind it. Villages are totally unique social environments. It’s not like a city where if you don’t like your neighbour you ignore them, or rent somewhere else. In villages the vast majority of people are there to stay. People are actually more tolerant of each other, there is a politeness, a ‘mucking in’ mentality. Whether it’s a trendy young family that sold their flat in Balham and bought the Old Rectory with a view to ‘Charles’ commuting to London from Market Harborough, or someone like the Village character Gilly Taplin, a more simple man, born on the kitchen floor of the house he still lives in. These characters come together in villages and they make it work. This project pays homage to that, set against a backdrop of a failing village cricket team, a failing church fete, a failing pub, and a love of pork pie. 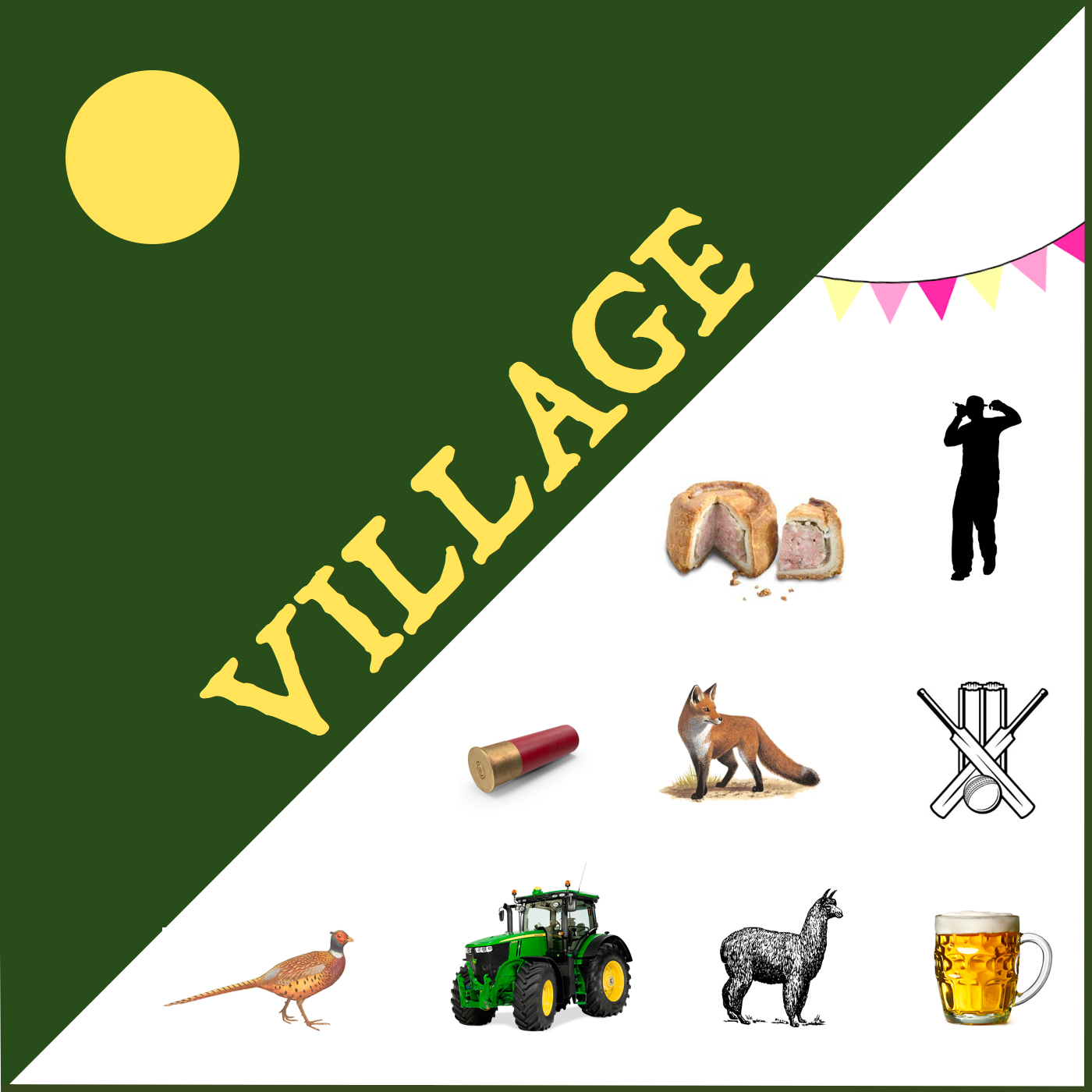 How did you come up with the characters for the sitcom?

They are all amalgamations of real people and to be honest they spilled out on to the page pretty quickly. I had originally thought about basing the whole thing around the village cricket side and so I needed a captain. That quickly gave rise to Gerry Aspinall, a posh retired army colonel with two kids at independent school in Rutland.

Then it was a case of nailing down other key characters that would resonate, while not overloading the cast. So I have a couple of gamekeepers (Gilly Taplin who is just exploring the internet dating scene and Ron Gosbit who is firmly focused on ferreting), a hardworking dairy farming family that don’t get out much, Ian Bird (a sarcastic, dry-witted Tigers fan with a bit of rage lurking in the deep), Carl and Christine (originally from Leicester but moved out to the countreh) and a handful more.

It’s described as a Leicester-centric sitcom, can listeners expect to hear a lot of local references?

It’s loaded with them, although perhaps more Leicestershire than Leicester. Some of the references are stupidly niche and designed to make one person I know laugh. Which I realise now may not be the recipe for success! That said, sport features in a big way. Episode 1 ends with a massive rant from a disgruntled Leics CC fan: “Absolute crap up there. Shit stadium, shit players. Any young lad with promise transfers to Notts as soon as they’ve got their maiden 1st class 5-for. Sack the board thats what I say.” alongside similar themes for rugby and football… “You just can’t look past Muzzy, he had it all!”.

Food comes up a hell of a lot. Pork pie, stilton cheese, Wok this Way. And one of the things I really appreciate is that I wrote to Dave Bartram from Showaddywaddy and he agreed to let me use a track in the last episode of the series in which Christine celebrates her 50th at the village hall. I tried to contact Mark Morrison with a similar request but he didn’t get back to me.

What well known sitcoms have you taken inspiration from?

I get as much inspiration for comedy from the village noticeboard as I do from TV or radio. I actually don’t find many things funny, most sitcoms are total crap, but there are some real gems out there.

Of course Alan Partridge is sublime but I would definitely single out Saxondale by Steve Coogan, not least because the character was a dour East Midlander. I also adore Curb Your Enthusiasm by Larry David and I recently re-watched the entirety of The Office, which is pretty much perfect in every way. People have been trying to mimic that cringe comedy ever since and no one has got close. I certainly clung onto a bit of advice from an interview I saw with Ricky Gervais. He always says ’write about what you know’ and, for good or bad, thats what I’ve done in Village.

Podcasting has really grown in popularity, what made you choose that as the platform to launch the sitcom?

Intimacy. The majority of podcasts are listened to on headphones, you’re right in people’s lugholes so you can load the script with tiny little flourishes, things people mutter in the background. That stuff doesn’t work on radio, which is why Radio 4 comedies are always over-acted plays where punchlines are rammed down your throat. Most people that have been kind enough to give feedback on Village talk about those glib little comments in the background like “I thought them ham cobs with the mustard were lovely at last year’s fete”. It takes ages to edit it all in but its well worth it.

All that said, yes the podcast medium is great but its also a cess pool of crap. Like anything with a low barrier to entry everyone piles in and you can’t tell the wheat from the chaff. A bit like Zanzibar back in the day. It’s extraordinarily hard to be heard, especially with the dominance and resource of e.g. BBC Sounds or Gimlet Media. Almost all podcasts are free to download, so I literally have to be more appealing to listen to than any other podcast anywhere in the world. That’s the downside.

Tell us a little more about you and what other projects you’re working on?

I made Village in my spare time, it was a labour of love but my work is a little different. I work for an innovation consultancy in Nottingham called G2. My time is spent between that and my wonderful little family.

In terms of podcasting, well Village is newly released and I’m proud of it. I took a punt and made Season 1 without approaching any sponsors or supporters. I just wanted to get it out there. If it is well received then the temptation to try to speak with potential sponsors will be there. I have been approached by a sponsor about making Season 2 of This Rural Life which might well happen. That would be fun. For now though I just hope that I can get Village into as many ears as possible. We’ll see where that leads.

Where can people listen to the series?

It’s on Apple podcasts, Spotify and Stitcher (search ‘Village Joe Johnson’). On twitter I am at @thisrurallife.