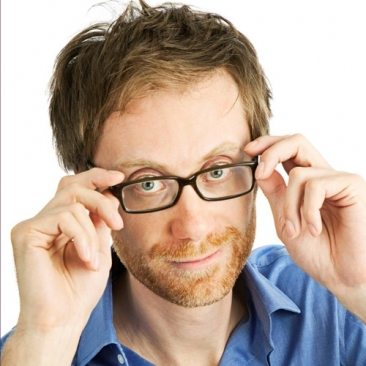 Stephen Merchant has been responsible for some of the most groundbreaking and brilliant TV shows of the last decade. With his collaborator Ricky Gervais, he has created two landmark television comedies, the immensely popular The Office and Extras. He, Ricky and their friend Karl Pilkington have also entered the Guinness Book of World Records for having the most downloaded podcast of all time, notching up an eye-watering 280,000,000 downloads. Their conversations have since been animated and turned into a highly successful cartoon, The Ricky Gervais Show, which has run for two acclaimed seasons on HBO and C4.

But now Stephen reveals another string to his bow, one that not everyone knew he had. He is embarking on his first ever stand-up comedy tour entitled, “Stephen Merchant Live: Hello Ladies …” which is coming to De Montfort Hall in Leicester on Monday 14th November.

The ostensible aim of the show is to help the lovelorn Stephen find a companion. He jokes that, “Life can be lonely as a TV writer, so this tour is a great opportunity for me to get out there and meet my fans. And make at least one of them my wife.” But the real objective of the tour is to make you laugh your socks off.

Chatting in the run-up to the tour, in person, he can be summed up by all those adjectives beginning with C: charming, charismatic, compelling and completely hilarious.

He starts by pointing out that this is not a new venture – he was a stand-up before he was anything else. In fact, Stephen, Ricky, Jimmy Carr and Robin Ince shared a bill in a show called “Rubbernecker” at the Edinburgh Festival in 2001.

“Most people don’t know it, but I started doing stand-up after I left university,” discloses the genial Stephen, whose latest TV show, An Idiot Abroad, co-starring Ricky and Karl, has been the highest-rated Sky One programme for three years.

“A lot of my heroes, like Woody Allen, were stand-up comedians and I always felt I should do it. I was good enough to get paid, I was a finalist in some comedy competitions, but somewhere along the way I lost interest. And once The Office took off, it just seemed easier not do it.

“I never got enough of a kick from performing to warrant driving up and down the motorway eating Ginsters in service stations at midnight. I used to look at Ricky doing stand-up and think. ‘Why’s he bothering? It’s so much effort.’”

But then, all of a sudden, Stephen had a change of heart. “I just woke up one day and I had the itch again. I felt I’d never really nailed stand-up.  So I started doing five or ten minute slots here and there and I’ve been pottering around the circuit for a few years now. This tour is the result of that itch.”

“Stephen Merchant Live: Hello Ladies …”, which is being filmed during the tour and released on DVD and Blu Ray by Universal Pictures UK on 14 November, centres on the subject of the comic’s, er, chequered romantic history.

Stephen thinks the hunt for a mate is ideal material for stand-up. “I talk about various aspects of my search for romance since the age of 16. For me, there’s nothing funnier than sexual misfortune as a subject for comedy.

“Everyone understands what’s at stake and the jeopardy involved. There’s a weight to it. If you say to friends, ‘I went on a date last night and it didn’t go well,’ they’ll immediately lean forward. There’s no way they’re not intrigued.”

Stephen, who last year co-directed with Ricky his first feature film, the well-regarded coming of age story, Cemetery Junction, continues that in the show, “I talk about the difficulties of meeting women and the sheer logistics of pulling someone.

“For instance, one story I tell is about how I got thrown out of a wedding. I was promised I’d be on a table full of single ladies. When I found I wasn’t, I got so angry, I offended the people on the table and was asked to leave!”

The comic will also be addressing exactly what he’s looking for in a wife. “On a date, I’d expect her to contribute financially. I’m not a gravy train – she should not expect a starter and a pudding. Yes, I’ve made some money but I don’t see anything wrong with still going to Pizza Hut with a two-for-one voucher.

“What’s wrong with that? Any right-minded woman should think to herself, ‘This is the man I should raise a family with because he’s sensible with his money’. Think about it, ladies. It’s Darwinian. You shouldn’t mate with the guy who splashes his cash at The Ivy, you should mate with the man who cuts out discount vouchers from the paper. ”

In the show, Stephen also tackles the subject of his own fame. “You have to acknowledge celebrity – it’s the elephant in the room – but it’s the least interesting thing about me. The interesting thing is how fame is not what you think it is.

“Some people seem to think I must be living it up in a mansion somewhere like Hugh Hefner. Believe me, I’m not! If I was living like Hugh Hefner, I’d be in a hot tub with two Playboy bunnies, not on stage in Leeds or wherever. I like to remind an audience ‘If my life was better than yours, then I promise you I wouldn’t be here tonight.’”

Stephen adds that fame hasn’t helped his romantic prospects. “I thought that dating would be much easier after I became well-known and had my picture in the paper, but actually that just brings a lot of other complications.”

One of the reasons “Stephen Merchant Live: Hello Ladies …” works so well is that the comic ensures he is on the receiving end of all the jokes.

According to Stephen, “My favourite comedians are always the butt of their own jokes. You appear to have a natural superiority when you’re on stage, because you’re the centre of attention, so I want to remind the audience that in my eyes they’re superior. I want them to be thinking, ‘I’m here with my girlfriend – he’s the one going home alone!’

The comic carries on that, “Of course, if you don’t do it right, people just feel sorry for you and can’t laugh. They think, ‘His life is so grim’. I don’t want them to come to a comedy show and leave depressed and maybe hit the bottle…on my behalf.”

The comedian, who has starred in movies such as Tooth Fairy and Hall Pass, is hopeful that “Stephen Merchant Live: Hello Ladies …” will show a whole new side to him.

He says, “To a lot of people, I’m just Ricky Gervais’ sidekick, but I’ve been doing stand-up since long before I met him.

“I’m aware that for most people this is the first time they’ve seen me do stand-up so they won’t know exactly what to expect. It’s their first taste. That’s what this show is, it’s a taster, like those samples of cheese they hand out in supermarkets. I hope people say, ‘Hmm, I enjoyed that, I’d like much more of Steve’s cheese!’”

He pauses, then adds : “That’s not going to look good in print, is it? ‘I’d like much more of Steve’s cheese.'” If that’s the headline, I’m going to be disappointed!”

Ticket information can be found HERE  .