There’s a whole celebration of gelato coming to Leicester this month as Gelato in the Square lands on Friday 27 until Sunday 29 October. The first event of its kind in the UK will see our finest independent gelateria, Gelato Village, help us all to get to know gelato by tasting the very best and bringing ten of the world’s top Maestro Gelatieri to Leicester.

They’ll be welcoming ten esteemed guests, including Paolo Brunelli, who is the number of gelatiere in Italy for a fantastic programme of tasting and demonstrations across the 3 day event. Leicester’s finest bartenders will also be livening things up with a daily aperitivo hour matching Italian cocktails to festival gelato.

The gelatieri will make their product fresh each day at the in-house Gelato Laboratory. The basis for the dairy-based gelato will be milk and cream from the single herd of rare breed Red Poll cows at Belvoir Ridge Creamery in Leicestershire. Some gelatieri will also be bringing the taste of home with them, to showcase the typical flavours of their region. For example, Raffaella Garavelli from Lombardy, will present a Happy Apple sorbetto, made with apples and quince as well as Franciacorta- a typical sparkling wine of the city of Brescia.

All events during the festival are free and held at Gelato Village in St Martin’s Square. So which events can you look forward to? Scroll down to view the full line-up of festival events but first – meet the gelatieri!

Daniele Taverna and Antonio De Vecchi – Gelato Village, Leicester
UK Winners of Best Gelateria in England at the Italian Awards 2016 and Dessert Parlour of the Year at the Food Awards 2016.

Paolo Brunelli of the Gelateria Cioccolateria “Paolo Brunelli” in Agugliano and Senigallia.
The celebrated top gelatieri in Italy.

Matteo Carloni of Gambrinus Gelateria in Perugia, central Italy.
Recently celebrated regionally for his placing in the top 100 gelatieri in Italy.

Vera Castrovilli & Alessia Torselli of Nevedarance Gelato Naturale, Caluso in Turin.
Like many of gelatieri on this list, they are members of Agrimontana’s Artisti del Gelato association due to their commitment to high quality, local ingredients.

Simone De Feo of Cremeria Capolinea in central Italy.
Simone has been featured in his regional press for attracting international crowds to his gelateria.

Antonio Luzi from Gelateria Artigianale Makì in Fano.
Placed sixth in the top 100 gelatieri in Italy.

Andrea Soban of Gelaterie Soban – two gelaterias situated in the north-east and in the north-west of Italy.
Andrea was recently featured in the Italian Vanity Fair.

Mirko Tognetti of Cremeria Opera Naturali per Gusto in Lucca, near Florence.
Celebrated regionally for his innovative collaborations

Raffaele Del Verme of Gelateria Di Matteo in Torchiara on the south east coast of Italy.
Another top 10 entrant in the Top 100 Gelatieri

THE PROGRAMME OF EVENTS 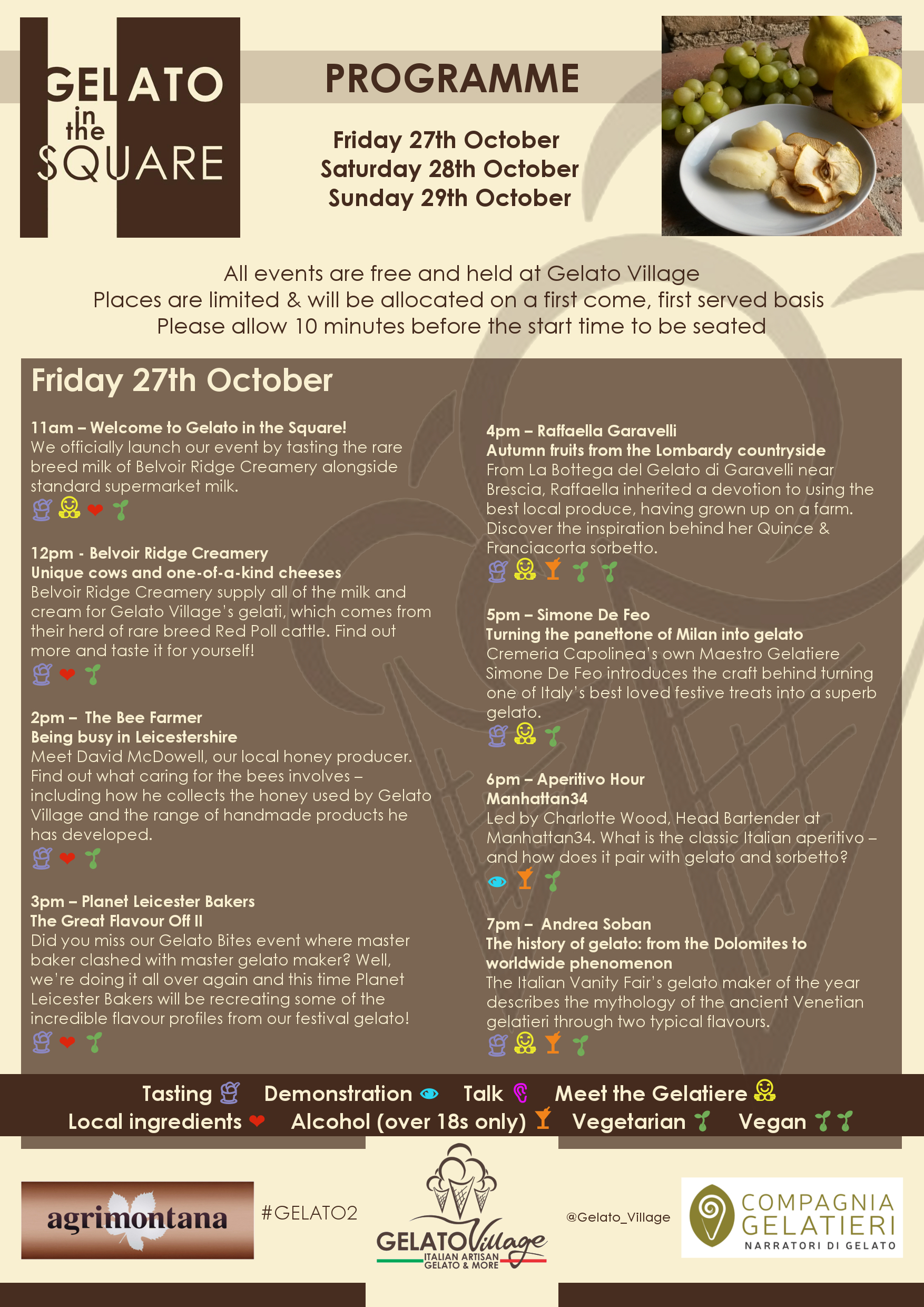 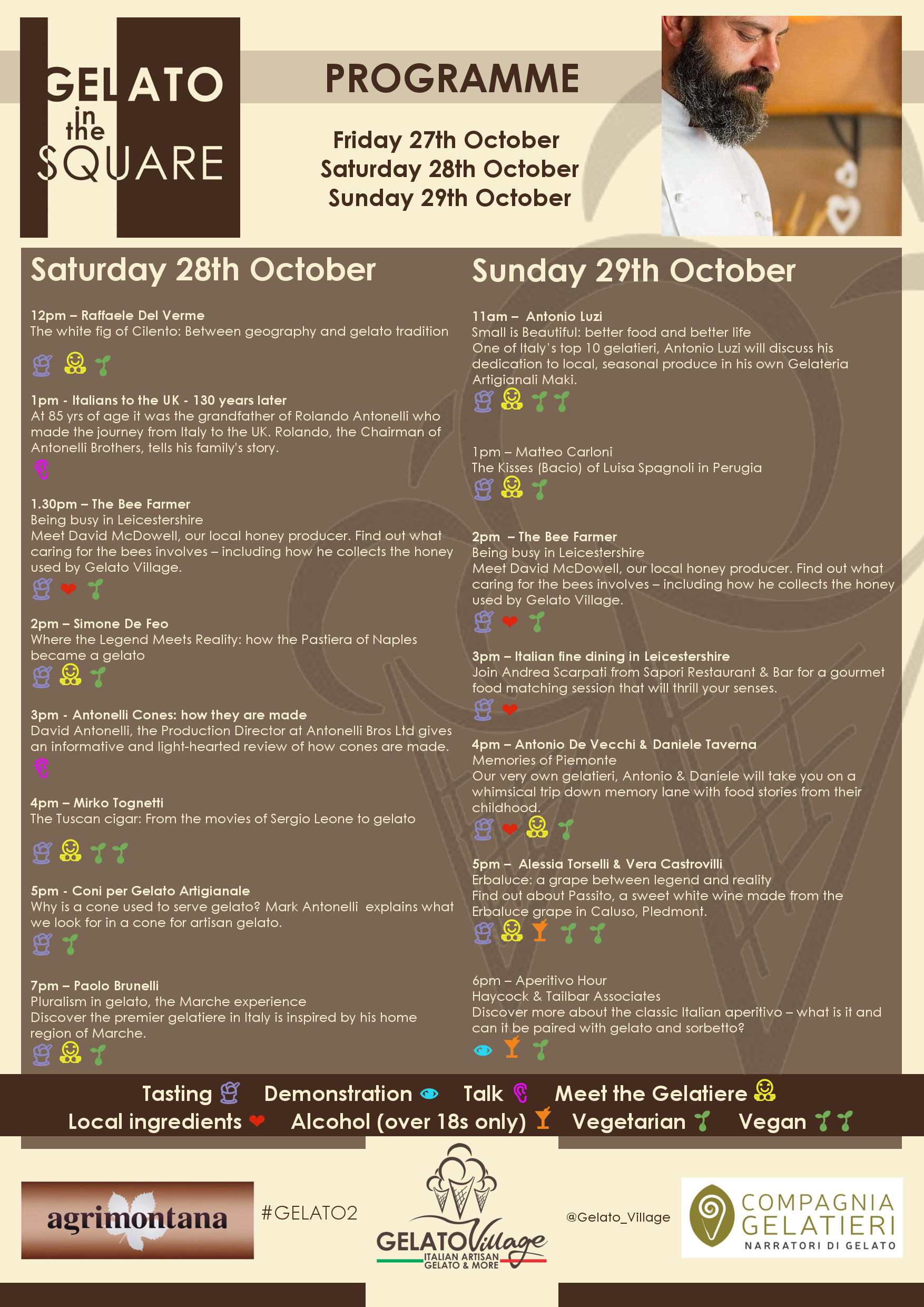 Places are limited and will be allocated on a first come, first served basis so please allow 10 minutes before the start time to be seated.

What are you most looking forward to? I’m off in search of the best Coffee Gelato! Let us know which events you enjoy over at @coolasleicester.