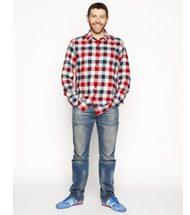 He of Googlewhack fame, Dave Gorman is taking his latest show on tour and stopping in Leicester on Tuesday 22nd November. This time he is part of a double act… with a projector screen. And they’d like to show you their Powerpoint presentation.

Cast your powerpoint prejudice aside, it’s not just for business meetings… A hugely successful live career has seen Dave sell out multiple tours of the UK, have two six-week runs off Broadway in New York extended to three months, complete a successful four-month tour of the USA and become responsible for the fastest selling show in the history of the Studio Theatre at The Sydney Opera House. Live performances have also earned him the title of Best One Person Show at the HBO US Comedy Arts Festival (twice), as well as nominations for the Perrier Award, the Barry Award American Drama Desk Award, which he was up against – among others – the legend, BILLY CRYSTAL.
﻿A busy 2011 has seen DAVE release his fourth book, ﻿Dave Gorman Vs the Rest of the World﻿, host his monthly comedy night, Dave Gorman’s Screen Guild at the Hoxton Hall, London and headline Dave’s One Night Stand for channel Dave. DAVE also recently became the Curator on the popular Museum of Curiosity for Radio 4, a role previously held by BILL BAILEY and SEAN LOCK, which is on air now.

﻿
“If it were possible to fall in love – platonically – with the execution of ideas, Dave Gorman would own me, heart and soul. I emerged from his Powerpoint Presentation at The Assembly Rooms feeling fabulous. If you want to laugh in a way that you’ll rarely find with straight stand-up, Dave is your man.” Tommy Holgate, The Sun

Dave Gorman’s Powerpoint Presentation will be at De Montfort Hall on Tuesday 22nd November and tickets can be purchased from HERE.