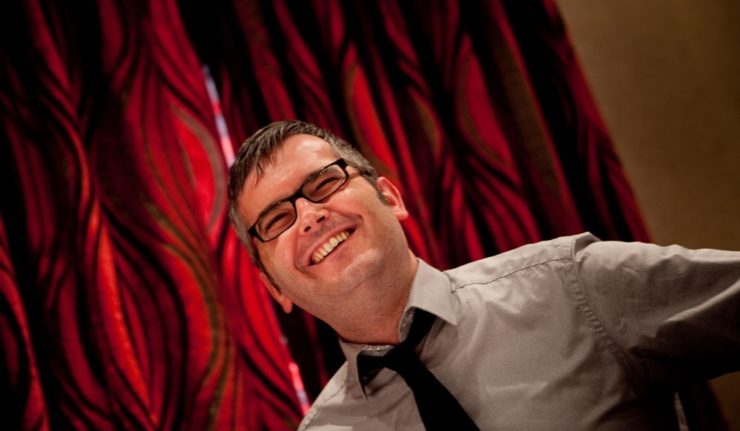 As the new year arrives our attention, as always, turns to Leicester Comedy Festival. This year the festival runs from 7th – 25th February and we can’t wait! Every year it provides us with some of our best nights of the year and this looks set to be no different. The festival started back in 1994 and the man at the helm, Geoff Rowe, has remained in place throughout. Having seen his baby, which started as a project at DMU, grow into the nation’s biggest and longest running comedy festival, we caught up with him to find out about the action behind the scenes.

What was your first experience of live comedy?
Erm, kinda depends on your defintion of comedy but i think the first “professional” comedy show i saw was Bill Bailey when he was performing in a comedy double act called The Rubber Bishops.

Obviously the festival started at De Montfort University, what were your long term goals at the time you first set the event up?
I didn’t have any long term goals to be honest.  It was just something we did as part of our final year studies and there was never any thought we’d carry it on.

Can you possibly pick out any highlights from throughout the past years of the festival?
It’s a really hard question to pick some highlights; there have been loads and loads.  I have really enjoyed interviewing acts like Sarah Millican, Johnny Vegas, Alexei Sayle and Romesh Ranganathan ,who are all old friends of the festival.  Meeting Tony Slattery for the very first time back in 1994 was an early highlight; he was mega famous at that point and I couldn’t quite believe I was sat drinking with him in a London bar.

If you were to be a comedian yourself who would you be similar to?
A really, really bad one.

If you weren’t running Leicester Comedy Festival what would you be doing?
Well, when i was much younger i wanted to be a vet or a teacher so maybe one of those

Once the festival has begun it must be a crazy busy time for all involved, how do you keep yourself going throughout those 3 weeks?
To be honest the energy and excitement of it does tend to help; I think we all thrive on adrenaline.  That and plenty of encouragement and having nice people around.

Who is the best comedian you’ve ever seen live?
I can’t say who my all time favourite is as there have been so many.  Going backstage at a gig in Montreal once and standing next to Steve Martin was a huge thrill.

As part of the festival you’ve given opportunities to people to experience doing their own first ever stand-up set, what advice would you give to any budding comedians?
Just do it. Get on stage and give it a go.  You might “die” on the first night but if you get the bug, keep going and hopefully you’ll get better and continue

How do you think Leicester’s entertainment scene has developed since the festival began?
Well there are loads of more venues and bars which is great for us.  I’ve seen plenty of peaks and troughs over the years but right now, the scene locally seems pretty good to me

If the Comedy Festival had a soundtrack, what song would it be?
Ernie (the fastest milkman in the west) by Benny Hill.

What are your 5 top tips of must see shows for the 2018 festival?
I’m hugely biased but I’m going to mention ones that we are mostly directly involved in: The Elvis Dead, Leicester Mercury Comedian of the Year, our 25th Birthday Party & 25 acts for £25.  I’d also mention Chris Washington who I saw in Edinburgh and is an incredible act.

What have you got planned for once the festival has finished?
A holiday and sleep.