As we head into March there’s plenty to look forward to in Leicester. We’re particularly excited about Light Up Leicester, which is a brand new light festival in the city from Thursday 5 – Sunday 8 March. We’re taking a closer look at the artwork in this week’s BID Spotlight.

So what is Light Up Leicester? Well, from 5pm to 10pm each evening, seven illuminated artworks will glow in the night sky. Four of these artworks have been part of successful events across the country, however three of them have been specially commissioned just for Light Up Leicester.

Not just to admire, the artworks in Light Up Leicester are also all interactive. Visitors will be able influence what they see in front of them, be it through movement sensors, wifi connections or physically changing the artwork.

INTERACT – Visitors can enter at either of the two opposite entrances where each of your footsteps will change the colour, speed and pattern of the lights. At the centre you will reach an opaque glass screen but with one step onto the final pressure sensor the glass will become clear revealing a new connection opposite… or will you? See if you can uncover the secret trick to reveal your connection! 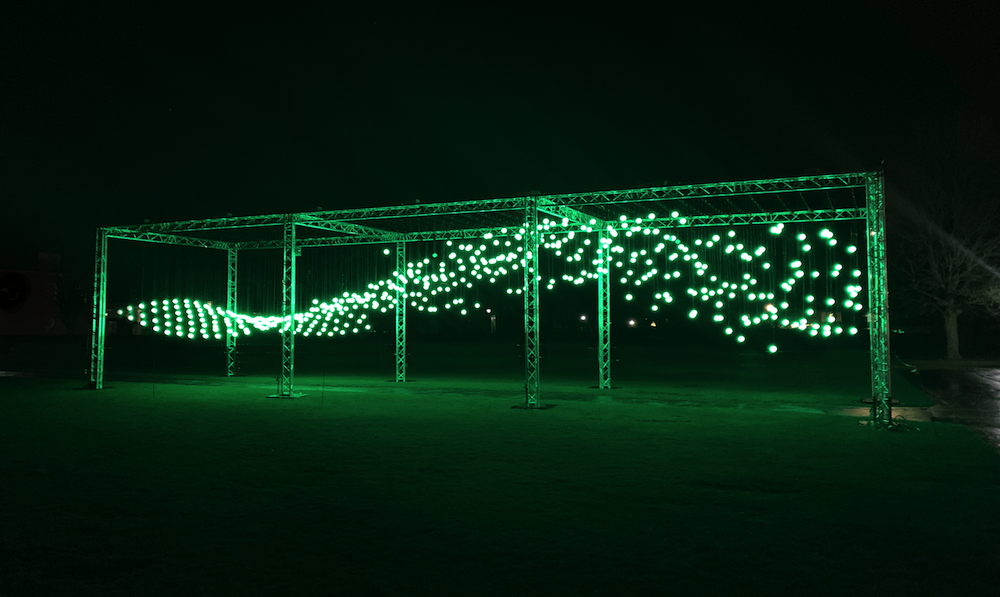 Making art accessible to all through the playful nature of work. You are not only witnessing the art – you are the artwork! 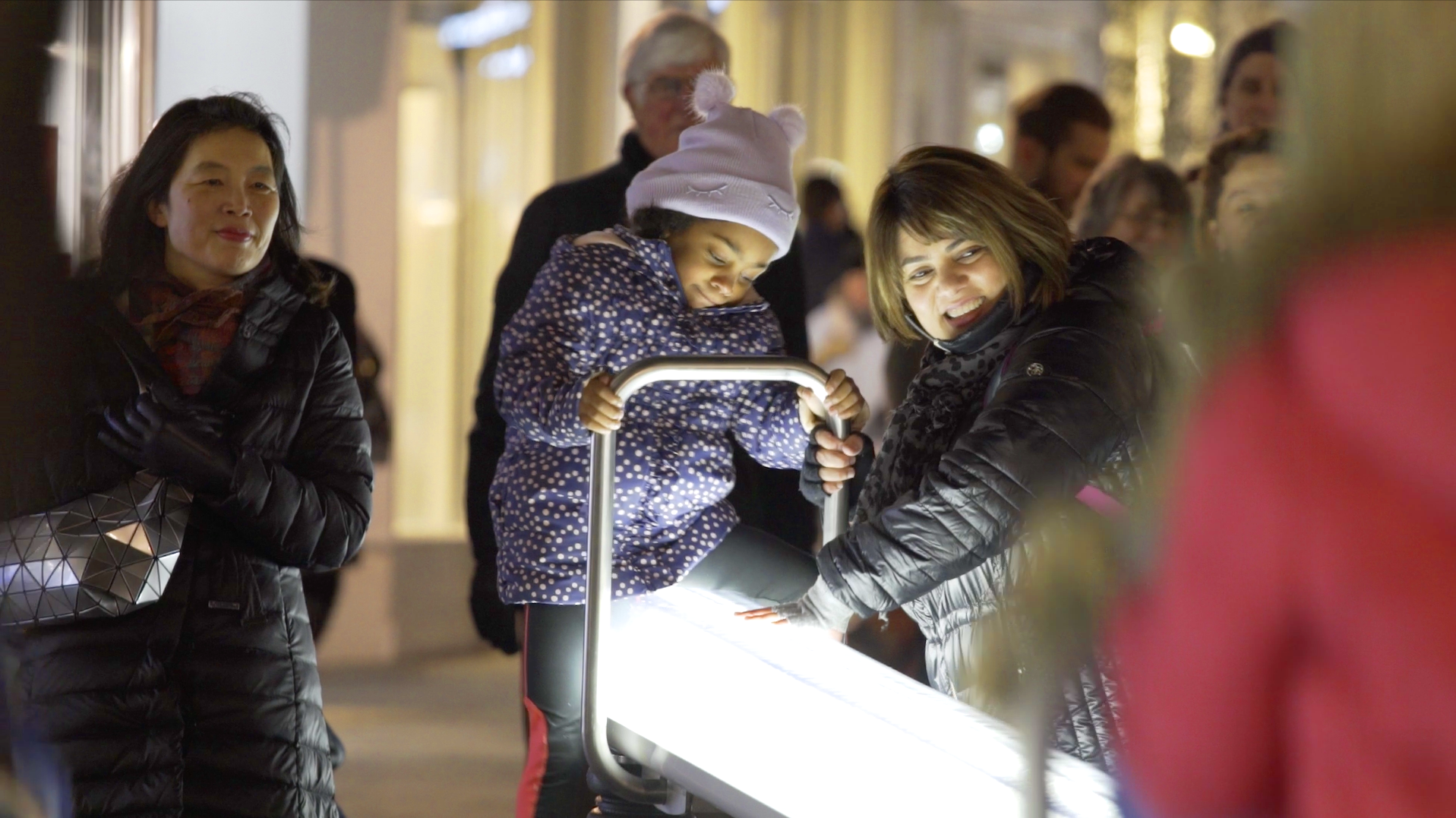 A playful twist on an urban mystery, the global phenomenon of shoe tossing is commonly known as SHOEFITI and theories about its meaning and origin range from simple to sinister. Deepa’s dangling LED trainers shine a light on this curious act of urban rebellion. The trainers have even been cast from shoes actually worn by the artist.

Take a trip down Silver Street to see these stylish shoes glowing in the night sky.

This towering 3m tall beautiful sculpture of a hooded youth visualises data and reflects audience interaction using cameras, screens and technology that are built into the sculpture.

INTERACT – The artwork uses mini screens and light illumination to respond to everything around it. Send a message through movement to the hooded figure; once the data is processed and ‘read,’ ultrasound sensors respond and illuminate the sculpture.

Formed of some five hundred individual suspended orbs that are brought to life through light and sound creating a dynamic audio-visual experience.

INTERACT – Each orb features LED lights with movement sensors and wireless connectivity, creating a walkthrough experience. 500 points of light and 500 voices, interconnected using Internet of Things technology and acting in choreographed harmony to create a series of immersive environments. 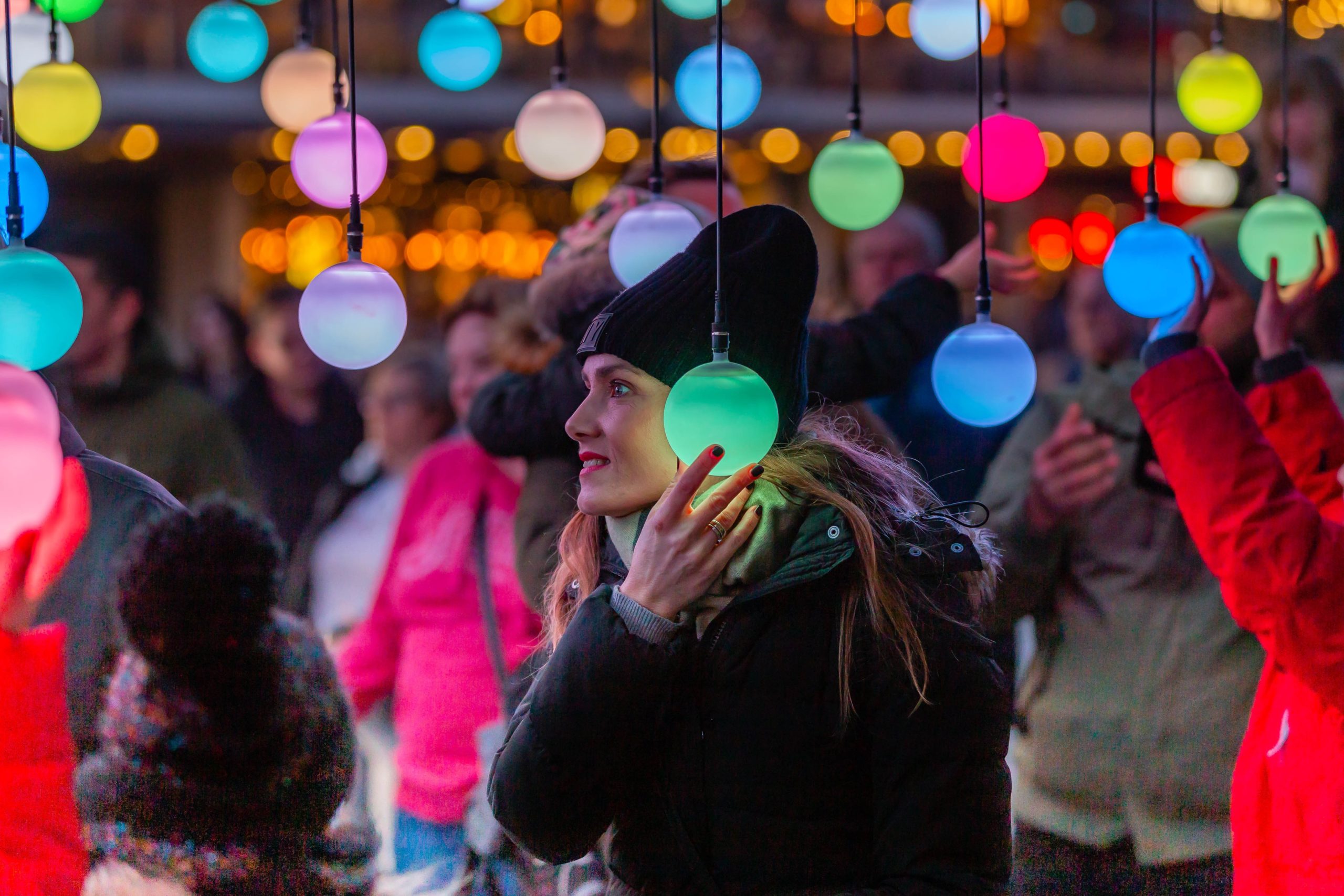 Marvel at the matrix of lights suspended in the air, capturing and responding to motion data in Leicester Market. This activity will lose its influence towards the centre of the field, which is reserved for tracing the movement of passers-by as they walk through the area.

INTERACT – Make sure you look up! Watch as your movements and the passing of city life pulses into the suspended field of lights, promising a different experience each time you visit.

Inviting you to pose and cut interesting shapes, the installation blends colour and light on the walls of New Market Square. Floodlights magnify your shadow silhouette as it appears on the huge white wall, you’ll see people become giants, as large as buildings.

INTERACT – Grab your glowsticks and throw some shapes in glorious technicolour.​ Why not get your headphones on and turn this into your own rainbow style silent disco?!

There will also be a trail running across all the artworks. Be sure to have your LoyalFree app downloaded and scan in at each installation to be in with a chance of winning some great prizes.

For full festival information you can also check out the festival guide.